Star Wars: Knights of the Old Republic/Black Vulkar Base (Garage)

The Garage Elevator takes you to the northwest corner of the garage. You cannot return to hideout or change party selection here, so you'd need to go back to the main base and out to the Sewers or Lower City to do either of these things.

There's a deactivated junkpile droid to your left (a war droid), and another one (a Mark II) further away by the west wall:

The Mark II is a melee droid that will patrol down the south tunnel and turn west at the T-junction. It's capable of killing the two Black Vulkars guarding the tunnel, even on Difficult without optimized weaponry or targeting systems, and without activated shields. It will also trigger the Minor Gas Mine on the right of that tunnel as it patrols, although it isn't worth repairing it for this purpose alone: a single Parts pack costs just over four times as much as a simple Anitdote Kit.

The war droid will patrol the north and east sides of the garage, bringing it into combat with the Vulkar patrol droid guarding the Loading Bay. However, there's another option to patrolling which may be more useful:

There are two swoop bikes in the central garage bay, and a Vulkar patrol droid can be seen in the distance patrolling in front of the Loading Bay in the east wall. Out of sight in the south wall is a tunnel with ramps down to it on either side, leading to the Engine Lab. 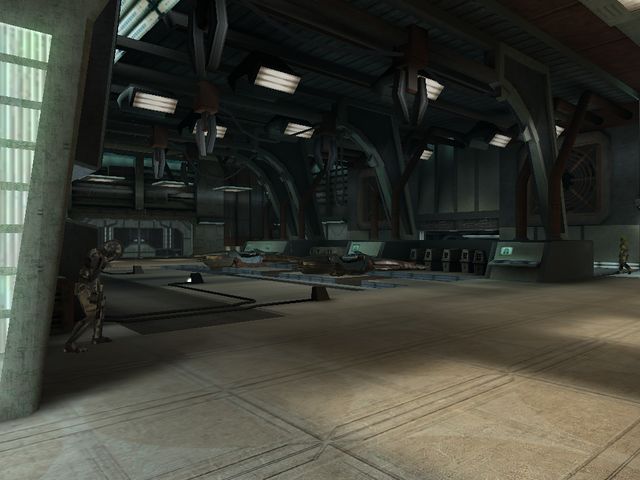 View of the garage from the elevator. The loading dock can be seen in the distance to the left beyond the two swoop bikes in front of you, and the garage head has just emerged from the west tunnel to the right and is about to go down one of the ramps leading to the south tunnel, where he'll disappear from view.

The garage head patrols from just outside his Office, followed by two Vulkar guards. About 35 seconds after you enter, he'll emerge from the west tunnel in the southwest corner before making an anticlockwise circuit of the garage and returning to his office. He can be ambushed as he emerges, before his escort can catch up.

However, if you hold your starting position and wait, he and his escort will emerge and patrol the south side of the garage, oblivious to your presence. When they become visible again in the southeast corner, you can go down the west tunnel to his office and use the garage computer to overload one of the swoop bikes in the central bay, sounding an alarm that causes the garage head and his escort, plus the four Vulkar guards in the room next to the engine lab, to all gather around it just as it explodes, killing all seven at a blow if you haven't already done so.

The garage head key card is the only way to open the security doors of the Engine Lab. The garage computer is in the southeast corner.

Overloading the swoop bike in the garage bay will sound an alarm that causes the garage head, his escort and the four Vulkar guards in the room adjacent to the Engine Lab to gather around it as it explodes, killing them all if you haven't already done so. Opening all security doors unlocks but does not open the Loading Bay, but it neither unlocks nor opens the engine lab's security doors.

The standard door in the south wall opens onto a room which is also accessible from the right door in the tunnel to the west. A Vulkar gang member is standing on either side of a workbench to the south:

There's a footlocker containing random contents against the east wall in the southeast corner.

Once you've got the garage head key card from the desk in his Office, you can use it to open the security doors of the engine lab. Otherwise:

Return to the garage and go down the ramp to the tunnel in the south wall. Just inside are two Black Vulkars, picked at random from one armed with a Blaster Pistol, another armed with a Vibrosword or a Twi'lek male armed with a Stun Baton.

The tunnel beyond is mined just before it reaches a T-junction:

It isn't possible to walk around them, but both Mission and Zaalbar can at least disable them. Otherwise, it's best to enter Solo mode and have one party member trigger the mines before using an Anitdote Kit if need be (Zaalbar is recommended, and if he's at least level 7 and selected the Toughness and Increased Toughness feats then he'll take no damage whatsoever, even on Difficult).

Turn left at the junction and you'll see first a standard door and then a security door in the north wall as you approach the east end of the tunnel. The first door opens on a room containing four Vulkar guards, two start armed with Vulkar Shock Sticks and another two start armed with Blaster Pistols:

However, it's much easier to use the garage computer in the Office to overload one of the swoop bikes in the central garage bay, sounding an alarm that causes the garage head and his escort plus these four to gather around it just as it explodes, killing them all if you haven't already done so.

There's another security door to the engine lab in the east wall of this room. If you try to open it before you've got the garage head key card from the desk in his office:

Once you have the card, do not open either door unless you're prepared for a fight as a light side character (opening the door in the tunnel may lead to preferable positioning), or ready to leave the base as a dark side character.

In any case, if you go west at the T-junction you'll see two standard doors in the north wall. The first opens to reveal a Duros Vulkar gang member in a room, working on a swoop bike, with a radiation shields locker in the southwest corner, just to the left of the door from the tunnel:

The second door opens to reveal two Vulkar gang members in a room working on a swoop bike, another Duros to the left and the other to the right.

There's a Workbench at the back of the room against the north wall, which can be used to add any upgrade items you have to any upgradeable weapons and body armor you have.

Once you open either of the security doors to the engine lab, you enter a dialog with Kandon Ark, a Twi'lek male who stands to the right behind a desk, while one of his bodyguards, a Twi'lek female, stands to the left. Two more bodyguards are behind them against the north wall.

If you ever return here, you can fight Kandon’s bodyguards but he himself will no longer be there, while returning before you've attacked the Hidden Beks allows you to take the swoop accelerator back to them. Otherwise:

All are armed with ranged weapons, although Kandon Ark may draw a Vibroblade, so melee attackers like Zaalbar can be at an advantage, particularly since Kandon's female bodyguard will use an Energy Shield while Kandon himself will use a Sith Energy Shield (which can also absorb sonic damage). He and the female are close enough together that Grenades thrown at either of them will damage the other, but this isn't the case for the other two bodyguards: any ranged attackers in your party should focus fire on them since they don't use shields.

The swoop accelerator is in the alcove in the northwest corner of the room, and it's mined, although it's possible to enter Solo mode and get around it:

Leave the Black Vulkar base via its main entrance to the Lower City, and return to the Hidden Bek base to speak to Gadon Thek (or Zaerdra) in its Main Hall.

The loading dock is in the east wall of the garage, guarded by a Vulkar patrol droid:

Reactivating the junkpile droid to the left of the garage elevator and engaging its patrol mode will lead to it attacking this droid, although you shouldn't normally have any trouble killing it yourself.

Once open, you'll see the Vulkar patrol droid patrolling back and forth between the south and north ends of the loading bay:

This is much tougher than the droid that was patrolling outside, and its Carbonite Projector can be particularly troublesome because it will still paralyze for 3 seconds (the length of a combat round) even if your Reflex save against DC 15 is successful. However, Echani Fiber Armor (received from the Security Crate in the east Lower City apartments) upgraded with a Mesh Underlay (retrieved from the center footlocker inside the Armory of the Black Vulkar base) has Damage Resistance: Resist 20/- vs. Cold, which will at least always negate its cold damage. It also activates its Energy Shield Level 3 before anything else, so most ranged weapons are much less effective since it can take 50 points of energy damage.

The easiest way to defeat it is to enter Solo mode and move each member of your party down the south wall of the garage to the southeast corner, then along the east wall until they're all lined up to the right of the open Loading Dock. 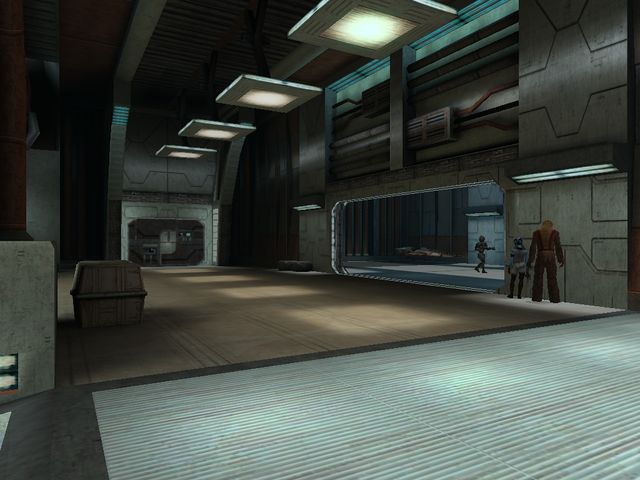 Mission and Zaalbar are already in position to ambush the Vulkar patrol droid, which is unaware of their presence.

From this position your party can observe it and throw Grenades just before it reaches the north end of its patrol, so that when it returns it will still be within the area of effect. 3–5 (most likely 4) Ion Grenades are the quickest way to kill it, although if it survives the first salvo then even though it shouldn't attack, it will activate its Energy Shield Level 3 and finishing it with a Frag Grenade would be advisable.

There are a footlocker with random contents and a strong box in the southeast corner of the loading bay.