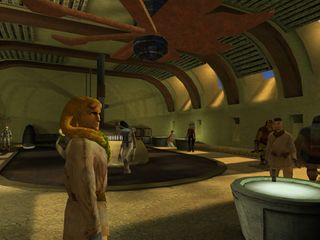 Komad Fortuna shoots you a quizzical look as you try to mingle with the hunters beneath the fan at the north end of the lodge.

The door exiting to Anchorhead is behind you in the east wall, in the northeast corner of the hunting lodge. The Rodian Pazaak player Kudos stands in the southeast corner while the hunters gather on the north and west sides of the lodge.

The Ithorian Fazza Utral runs this hunting lodge and stands at the north end below the ceiling fan:

You won't be able to buy or sell anything until you've been to the Czerka Office next door to the southeast to get a hunting license:

If you've received Sharina's Wraid Plate then you can now sell it to him:

Once you've killed wraid in the Dune Sea and received Desert Wraid Skull Plates from their remains, or a Krayt Dragon Pearl (or two) after a successful hunt in the Eastern Dune Sea, those can be sold to him as well:

However, despite the special dialog his inventory simply opens and you sell them by opening your sell list like any other merchant, and the prices he offers are no better (as ever, Yavin Station offers the best prices). You can ask about what he does and hunting:

You can also ask about Tatooine and anything out of the ordinary happening:

The hunters are gathered around the tables on the north and west sides of the lodge. They can all be asked about themselves and hunting, and told you're looking for something and asked who knows this planet best. You can also threaten them all to get them to leave, moving closer to the dark side of the Force (although only Dorak Quinn will pay you to leave him alone before leaving himself, and only 50 credits at that).

The Twi'lek hunter Komad Fortuna stands closest to you as you enter, to the right of a table in the northeast corner. You can ask him about himself and hunting:

You can try to extort him:

Regardless of how persuasive you are with the Force he doesn't pay you, and simply leaves. He leaves for the Eastern Dune Sea once you've received a map from the Sand People chieftain or the Jawa chieftain Iziz, and he never returns...

The human hunter Dorak Quinn stands to the left of the center table on the north side of the lodge, between Komad Fortuna and the Gamorreans. You can ask him about himself and hunting:

You can move closer to the dark side of the Force by demanding respect:

He needs no persuading to pay you to leave him alone before leaving himself:

The leader of the Gamorrean hunters Gurke stands to the left of the table in the northwest corner, with Narkal and Ugzak to the right. You can ask about them and hunting, and tell him you're looking for something, asking if they're good scouts:

Gurke will no longer answer questions after you tell them to watch their tongues, or confront them with Sharina's suspicion that they may have killed her husband:

If you try to speak to them again you can only repeat your threat or accusation, although they'll leave if you tell them you believe the accusation, and you'll move closer to the dark side of the Force if you continue to threaten them:

If they survive their desert ambush in the Dune Sea:

If you appeased them in the desert, you can change your mind to restore the respect of any remaining hunters. It's easy to use the Force to get them to leave:

Otherwise, if they survived their desert ambush you can kill them now:

The human hunter Tanis Venn stands apart from the other hunters at a table by the west wall, at least until you leave Anchorhead and enter the Dune Sea. You can ask him about himself and hunting... and a female character can expect him to flirt, even after telling you about his wife:

You can move closer to the dark side of the Force if the only question you ask is what his life is worth:

Regardless of how persuasive you are with the Force he doesn't pay you, and simply leaves. Once you've entered the Dune Sea you'll find him there, and he never returns...

The Rodian Pazaak player Kudos stands by a table in the southeast corner of the lodge. You can play him if you already have a deck, otherwise you can ask him about Tatooine and any rumors from off-planet: