Star Wars: Knights of the Old Republic/Black Vulkar Base

The elevator from the Upper Sewers takes you to the north end of a room in the northeast corner of the Black Vulkar base: you need to return to the sewers if you want to return to hideout or change party selection.

Beyond the south standard door is the east end of a corridor which turns north around a corner to the west. It's patrolled by a Vulkar patrol droid, which may not be visible if it's turned the corner:

This corridor has three standard doors on each side. Beyond the middle door in the north wall is a room with supplies to the left, and a disabled sentry to the right:

It uses weak melee attacks and only patrols between its starting point and the west end of the corridor, returning before it even reaches the corner, so repairing it is of limited use except for receiving experience.

There are more supplies to the right of the entrance to the room beyond the left door in the north wall of the corridor, but this entrance is mined:

Beyond the left door in the south wall (opposite the elevator) is another corridor to the south around the perimeter of the Rec Room, which turns west into the Armory and is patrolled by another Vulkar patrol droid.

Go down the corridor to the west and around the corner to the north and you'll see a standard door in the west wall at its north end: do not open it yet, as beyond is the security system guarding the Garage Elevator. There's a security panel to the left of this door:

You now know you can disarm the turrets using the main terminal opposite the Armory door, or a pass card (carried by two Vulkar lieutenants in the Barracks).

You receive experience for using the main terminal but none for using the passcard (aside from that received for killing the Vulkar lieutenants and their guards). However, it's possible to receive much more by destroying the turrets with Grenades. Enter Solo mode and open the door, then run back across the corridor to the opposite wall. You can now see three defense turrets at the west end of the room beyond, but you should be out of range.

They have On Hit: Instant Death, DC 100 and you cannot attack them without being within range of their hits. However, you can throw grenades at them from beyond their range, and those thrown at the center turret will hit all three. Ion Grenades are ideal, and it will take 2-4 (most likely 3) to kill them: two can be found in a metal box in the armory, while the Equipment Emporium in the Upper City sells from an infinite supply for 130 credits each.

After dealing with the turrets in garage security, open the garage elevator in the north wall and go down to the garage. Once again you won't be able to return to hideout or change party selection, so return to the Sewers or Lower City if need be.

This isn't necessary, although on your very first playthrough it does inform you where to find a pass card, and it gives you an opportunity to move closer to the dark side of the Force. The control room is behind a security door in the south wall of the corridor leading west out of the Armory chamber.

The door can also be unlocked by using the main terminal against the north wall opposite the armory itself, for which you receive experience. Inside is a Twi'lek male Black Vulkar:

He surrenders after being hit, allowing you to question him:

If you don't enter the control room before completing the search for Bastila, he won't be here if you return. There's also a footlocker in the southeast corner with random contents.

The armory itself is in the middle of this chamber, and a Black Vulkar patrols clockwise around it.

The door to the armory is in its north wall, flanked by a Vulkar sentry droid on each side, identical in all but name to the Vulkar patrol droids you should already have encountered. 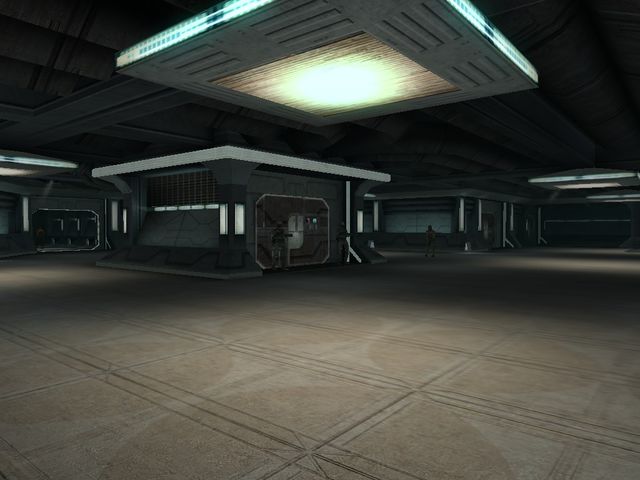 Armory as seen from its northeast corner. Droids flank the armory door, while the patrolling Black Vulkar can be seen between them and the west corridor leading past the control room and barrack doors to the right. The Black Vulkar patrolling the south corridor exiting to the Lower City can be seen in the distance to the left.

As you'd expect, the door is locked: aside from bashing it open or using Security, it can also be unlocked by using the main terminal opposite against the north wall, for which you receive experience. Inside you'll find a metal box to the left, and footlockers to the right and center.

The security panel opposite the armory against the north wall is the main terminal which can be used to override Garage Security:

All doors on this level of the Black Vulkar base are unlocked and opened if you open all security doors. Overloading the power conduit in the Barracks kills both Vulkar lieutenants and all but one of six Black Vulkars, making it much easier to get the pass card needed to disarm the turrets guarding the garage elevator. Shutting down the garage elevator security system instead gives you experience, but not as much as killing the turrets yourself with Grenades.

Otherwise, uploading area schematics may seem like a good idea on your first play-through, but accessing security cameras will reveal points of interest on the map without costing Computer Spikes. Overloading the terminal is not recommended, as it results in 1000 electrical damage to everyone in the vicinity.

The middle door in the south wall of the first corridor opens onto a bar. A Vulkar bartender stands to the left, while a bouncer droid stands in each of the northwest and southwest corners:

A standard door at the south end of the bar opens onto the corridor around the southeast perimeter of the rec rooms, while one in the west wall opens into a dining area containing another bouncer droid identical to those found in the bar, except it has Awareness 102.

This area also contains a footlocker by the west wall with random contents, and a waitress who can be questioned (although she'll be gone if you return after completing the search for Bastila):

Once you've asked any questions you want answered, you'll move closer to the light or dark side of the Force depending on how you end the dialog:

If you attack her then she's unarmed and unarmored, so she can't put up much of a fight.

This dining area also has a standard door in its south wall which opens onto the corridor around the southeast perimeter of the rec room, and another in its north wall which opens into a kitchen containing a Vulkar cook who's identical to the Vulkar bartender in the bar.

Before opening either door, prepare for a fight because there are two Vulkar lieutenants guarded by six Black Vulkars within: three arm themselves with a Vibroblade, two with a Quarterstaff and one with a Blaster Pistol.

All but the two Vulkar lieutenants and one Black Vulkar start with melee weapons, and if your party surprises them at the north entrance there is sufficient distance to allow ranged weapons and Grenades to be used to kill them before they can reach you. If you're playing without a party or favor melee weapons then the south entrance may be preferable, since they're closer to it, some are blocked from sight around the corner to the west and the room is narrower at this entrance.

However, it’s much easier to use the main terminal opposite the Armory to overload the power conduit at the inside corner of the barracks, since this kills all but the Black Vulkar armed with a Blaster Pistol.

This is a pass card used to grant access at security terminals.

You now have the pass card needed to disarm the turrets in Garage Security. Against the west wall are supplies to the left, and a footlocker with random contents on the right.

At the end of the corridor exiting the Armory chamber to the west is a standard door in the north wall opposite the north entrance to the Barracks, which opens onto a room containing an empty pool. A deactivated pool droid stands just inside the entrance, at the shallow end of the pool:

If you program the droid to crawl into the pool and self-destruct, it reveals that the pool is mined, and triggers them.

Unless you've exploited the respawning Rakghouls in the Undercity and Lower Sewers to gain experience and levels, you won't be able to detect these mines, let alone disable or recover them. However, since you receive no experience for repairing the droid and even a single Parts pack costs just over four times as much as a simple Antidote Kit, it's best to enter Solo mode and have one party member trigger the mines before using a kit to neutralize the poison.

This is worth doing to get to the footlocker in the northeast corner of the pool.

The main entrance hall for the Black Vulkar base leads off to the south of the Armory, and it's patrolled by a Black Vulkar:

At its south end is the entrance from the Lower City. If you retrieved the prototype swoop accelerator for the Hidden Beks, this is the quickest route back to their base. You can also exit to return to hideout or change party selection, but in either case be aware that you'll be attacked by two Vulkar guards outside unless you killed them earlier while in the Lower City.