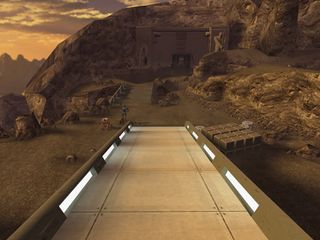 The entrance to the Sith Academy is on the opposite side of a canyon to Dreshdae.

With the door to Dreshdae behind you to the west, a ramp descends to the east. A protocol droid and a utility droid roam around its base:

There's a metal box to the northwest, and another to the southwest:

Cross the bridge over the canyon separating Dreshdae from the Sith Academy on the east side. You only need to speak to the Sith Academy guard, but Belaya may confront you beforehand and you can move closer to the light or dark side of the Force after speaking to Mekel.

If Juhani was slain during your Jedi Trials on Dantooine then Belaya stands before the entrance to the Sith Academy and challenges you before you can speak to anyone else. Combat is inevitable, but if you killed Juhani then you should certainly be able to kill her:

She receives bonuses depending on your character level:

If you return to Dantooine then you can report this to Vrook Lamar in the Jedi Council Chambers:

Three prospective Sith students stand to the left of the Sith academy entrance, while two closest to the door have already collapsed, and the Sith apprentice Mekel stands opposite them to the right of the entrance. If you speak to the prospects in the middle and on the right before Mekel:

If you speak to Mekel before asking the Aqualish prospect on the left what he's doing:

Speak to the Aqualish prospect:

Once Mekel has left, you can try to persuade the Aqualish prospect to do likewise:

The guard will kill him. Otherwise, if you fail to persuade him, or don't even try, then he remains:

The prospect on the right can also be persuaded to leave:

Regardless of the outcome he always collapses. The prospect in the center won't listen to you:

However, he too collapses if he sees you've acquired a Sith Medallion:

If you return after entering the academy, Mekel and these prospective Sith students are gone.

The door to Sith Academy on the east side of the canyon is locked:

[This door is only open to members of the Sith Academy.]

You need to speak to the Sith Academy guard on the left:

Although he cannot be persuaded to let you in, once you've spoken to him then Yuthura Ban appears in Dreshdae's cantina and you'll be given a couple of opportunities to acquire a Sith Medallion. You don't need to ask him how you become a Sith or about the medallion he mentioned, although if it's your first time then it's obviously helpful:

Once you've spoken to him, you cannot return to Ebon Hawk or change party selection here until the Sith thugs and the Sith apprentice in Dreshdae from whom you can acquire a Sith Medallion no longer stand between you and the Ebon Hawk. If you return with a medallion:

After entering the academy, that's all he has to say to you.

Once you've spoken to the Sith Academy guard, the Twi'lek Sith Master Yuthura Ban appears Dreshdae's cantina. Although she can be persuaded to let you enter the academy, it's better to acquire a Sith Medallion first. Four Sith thugs also appear outside the Czerka Store, and their leader will challenge you as you approach:

If you say you don't want to pick a fight here, you can move closer to the light side of the Force and receive experience for successfully persuading them to leave you alone:

If you try to bribe them and fail, you still move closer to the light side of the Force; you don't if your response is more threatening, but no experience is received for successfully intimidating them:

If you don't bother to persuade them, fail or use the Force, then they engage you in combat:

Killing them results in more experience received at level < 16, but if this is a persuasive light side character's first encounter with multiple Force users then it may be better to avoid it. They receive bonuses depending on your character level:

Despite his low level, the Twi'lek thug has both Force Immunity: Fear and Stun, which effectively gives him Immunity: Mind-Affecting:

This medallion is clearly marked with the insignia of the Sith, and otherwise consists of a shiny black onyx-like material. It is unlikely to be very valuable, but is quite distinctive.

If you return to the room to the northwest then you'll see a lone Sith apprentice besetting two prospective Sith at its southwest exit:

The surviving prospect runs away as the apprentice engages in combat. At character level > 14:

Otherwise, you can ask what that means:

Say you didn't get it in the normal way for a chance to alter your alignment:

You need to successfully persuade them to leave:

Otherwise, if you can still speak to them after entering the academy:

There should be nothing left to do but present the medallion to Yuthura Ban.

The Twi'lek Sith Master Yuthura Ban appears in the northeast corner of Dreshdae's Cantina. You have to speak to her to enter the Sith academy:

After confirming who she is you can ask her about joining the Sith, or do so after failing to persuade her and speaking after acquiring a Sith Medallion:

Otherwise, you can get to the point by being more adamant about (not) joining the Sith when you first speak to her, or successfully lying to her about how you acquired a medallion (which is easily done):

Otherwise, if you don't have a medallion then using the Force won't persuade her to accept you into the academy, and you may fail if you use skill:

If you return to say you want to join the Sith before acquiring a medallion:

Otherwise, it's easier to lie if your alignment is already dark (< 40), but if this is the case then it's better not to do so:

She doesn't need persuading if you have a medallion: