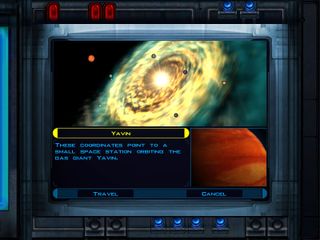 Yavin on the Galaxy Map

Yavin station is available on all systems, but only as downloadable content (DLC) on Xbox. It's inhabited by Suvam Tan, a Rodian inventor and merchant whose inventory includes some of the best items in the game; he also offers the best price by far for any items sold to him, so he should be your first port of call after leaving Dantooine, and any other time you want to sell unwanted items.

Only when you disembark can three of your party be asked if they know anything about this place - they don't:

You enter the Yavin station at the west end of its airlock. Using an access panel mounted on the south wall to the right opens the door behind you to the Ebon Hawk: similar access panels open three doors to the east. However, the first time you use the third panel to the east, the door doesn't open and the Rodian Suvam Tan appears on screen. The quickest way to get him to open the door is to persuade him to do so using the Force at the first opportunity:

He returns to wander around his workshop beyond the door. 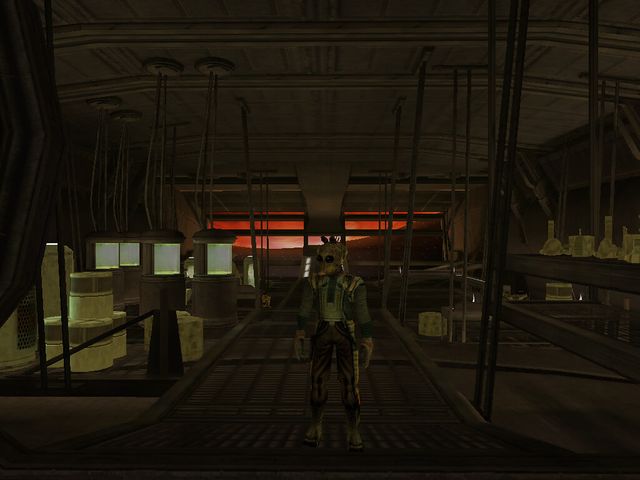 The east wall is a window through which Yavin and one of its moons can be seen, blue and to the right: a short ramp leads up to it, and two other ramps lead up to doors in the north and south walls. If you try to use one of the access panels mounted beside each door on the east side:

There's also a gizka, a little reptilian rabbit-like creature, in the workshop. Suvam Tan will comment on it if you don't speak to him:

You can interact with it, moving closer to the dark side if you kill it:

Once you've interacted with it in any way you can tell Suvam Tan:

To get down to business as quickly as possible, you should say it's none of his business, then that you'd like to ask him something else, but you're not really interested in more questions and you'll be leaving now, before speaking to him again. However, if you want to explore dialog that won't be available if you speak to him later, then do not ask him to tell you about this system; himself, what he's doing here or why did he come here to the station; Trandoshans, smugglers or 'something else':

Otherwise, all remaining questions can be asked when you next speak to him:

However, before buying anything it's worth asking if he happens to play Pazaak and then defeating him 10 times for a 20% discount. If you're not willing or able to do that, then asking him a few questions to tell you about this system gives you a 5% discount if you can persuade him using the Force:

Otherwise, you can ask him to tell you about the Great Sith War and Exar Kun:

You can also ask if he knows anything about ancient Star Maps or the 'Star Forge', how he knew Davik, and who are the smugglers and Trandoshans:

If you don't have a Pazaak deck, it's easy to persuade him to give one using the Force:

Once you have a deck, you can play:

Suvam Tan's items cost a lot of credits, so it's worth getting a discount if at all possible: using the Force only persuades him to reduce costs by 5%, but 10 Pazaak wins result in a 20% discount which can save you thousands (perhaps even tens of thousands) of credits. Items can also be sold to for 65% of their base cost, which is 2.6 times higher than any merchant not on Taris (and still at least 62.5% more than those that are).

After acquiring a third Star Map, more items are added to inventory, any item bought is replaced and any sold is removed; the same applies after acquiring the fifth and final Star Map. If you don't travel here every time, you can simply enter and exit the Ebon Hawk to update.

Each time you return before acquiring a third Star Map:

If you return after acquiring a third Star Map, then you'll find Suvam Tan being confronted by two armed Trandoshans:

Each time you return before acquiring the fifth and final Star Map:

If you return after acquiring the fifth and final Star Map, the Trandoshans are also back... in force:

The Trandoshans decloak, and have you surrounded:

Suvam Tan may be invulnerable but he still cowers in fear for the duration of the fight. All seven Trandoshans can use up to three Thermal Detonators each, so your first priority should be to move into melee range as soon as possible. The two Trandoshans flanking Suvam Tan to the east use two Vibroswords each:

Two others using a Heavy Repeating Blaster at range and a Vibrosword in melee combat stand to the west, while three others like this stand at the top of each of of the ramps at the east end of the room:

Medical items and grenades are only received if unused.

Otherwise, after the following response you get another shot at the 5% discount if you can persuade him using the Force:

Each time you return from now on: