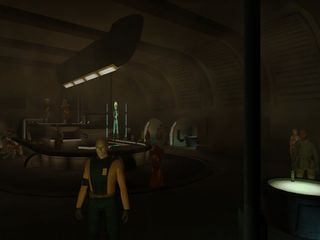 The Czerka officer eyes you suspiciously as you view the cantina from its northeast corner (the Czerka merchant officer is out of shot to the left).

The door exiting to Anchorhead is behind you in the east wall, in the northeast corner of the cantina. Among its staff and clientele, Junix Nard is a merchant, Furko Nellis a Pazaak player who can sell or give you a deck, and Gandroff and a Czerka officer are two patrons with whom you can interact to get credits, and move closer to the dark side of the Force. Helena, Bastila's mother, can also appear.

The proprietor Junix Nard stands behind the north end of the bar in the middle of the cantina:

You can also ask him about racing and hunting on Tatooine, and if there's anything out of the ordinary happening:

There's an Ithorian patron on the east side, by the podium at the south end of the bar and cantina on which a female Twi'lek dances to the music of the two Bith behind her on either side:

The Pazaak player Furko Nellis stands at the northwest corner of the bar in the middle of the cantina. Although you can try to ask some questions, he's only interested in playing Pazaak:

If you don't have a Pazaak deck, it's easy to persuade him to give one using your own skill or the Force:

If you're too impatient to keep trying until you succeed, it costs 100 credits:

Once you've encountered the messenger Malare after speaking to Bastila, Helena appears to the left of the table in the northwest corner:

Once Bastila is added to your party:

If you speak to Bastila before finding her father's Holocron:

The holocron can now be found in a tattered equipment pack at the back of the krayt dragon cave in the Eastern Dune Sea, which is only accessible after making peace with the Sand People or killing the chieftain in their enclave. When you and Bastila return with it:

If you agree with Bastila, she and her mother part on poor terms:

Otherwise, you can question Bastila and reconcile the two:

Either way, Bastila keeps her father's holocron. If you speak to Bastila after parting with her mother:

Gandroff, a retired swoop racer, stands to the left of the center table at the north end of the cantina. You can ask him about himself and racing, telling him you're looking for something and ask who knows this planet best:

He'll no longer answer questions if you're disrespectful:

You can move closer to the dark side by using the Force to persuade him to be quiet:

However, you can take credits from him instead, and move closer to the dark side of the Force:

A Czerka officer stands on the left of the table table in the northeast corner. You can try to question him:

He won't answer at all after you've taken issue with him:

If you have the Force powers Wound, Choke or Kill, you can use them to move closer to the dark side of the Force:

Neither he nor the Czerka merchant officer standing at the same table on the right, closest to the exit, will now speak to you:

[Having seen what happened to his fellow officer, this man has no desire to risk a similar lesson. He shifts uncomfortably under your scrutiny.]

However, you can take credits from him instead, and move closer to the dark side of the Force:

If the Czerka merchant officer hasn't been intimidated by watching you choking his fellow officer:

A Jawa server stands at the north end of the bar in the middle of the cantina. You can learn that some of the Jawa people are missing, and the location of their leader, Iziz, if you want to find out more:

Iziz can be found by the gate to the Dune Sea at the east end of Anchorhead. If you return after completing Fair Trade with him:

A less communicative Jawa server stands on the west side of the bar: