To continue the search for Bastila you'll need to save Zaalbar from the Gamorrean Compound before Mission will lower the Force Field to allow you to travel to the Upper Sewers.

The path of least resistance is the north entrance from the Undercity. You'll find yourself at the bottom of a ladder at the west end of a short tunnel, with a sewer door at its east end which is mined:

You can move around to the north side if you're unwilling or unable to disable or recover it (move each party member in Solo mode to prevent accidents). Beyond the door is a small room with three rakghouls and a rakghoul fiend in its southeast corner:

All rakghouls and fiends you encounter in the lower sewers will be the same as these.

Beyond the southeast sewer door is the Force Field (which will be visible on the left when you open the door). There's a skeletal corpse which can be searched for random contents to the left of the southwest sewer door next to that leading to the ladder to the Undercity: this door opens onto a tunnel which turns south and marks the east boundary of the Gamorrean Compound.

Oddly, the south entrance from the Undercity takes you to the northeast of the sewers. You'll find yourself at the bottom of a ladder at the west end of a short tunnel, with a sewer door at its east end. Beyond this is a room containing a Gamorrean raid leader and two Gamorrean raiders:

There's a corpse in the northeast corner with random contents and another sewer door in the south wall. Beyond this is a tunnel to the south which turns west and ends in a sewer door. Beyond it is a chamber with water cascading into the middle of it, and a walkway around its perimeter with four Gamorreans on its east side: 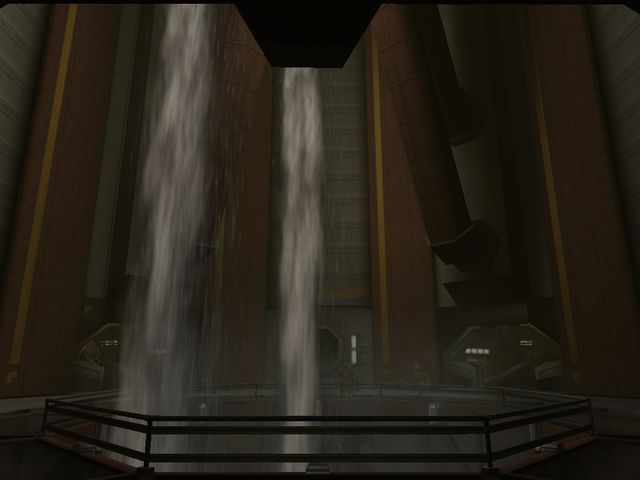 The view from the east entrance: the tunnel to the force field is on the right to the northwest, while a patrol walks back up the tunnel on the left to the southwest.

This tunnel contains a Gamorrean patrol:

The tunnel along the east boundary of the Gamorrean compound contains another Gamorrean patrol.

The main entrance to the Gamorrean compound is through a sewer door in the east wall. Beyond it is a room with the Gamorrean chief in its northwest corner and a Gamorrean elite in each of the three remaining corners:

The Gamorrean chief has Awareness rank 50, so Stealth is not an option.

Like all enemies in the lower sewers they're melee fighters, so it's advisable to place someone or something in the doorway to create a bottleneck, preventing them all from attacking at the same time. If neither you nor any of your Party are robust enough for this, you can activate the rusted droid in the room beyond the east sewer door opposite the main entrance: engaging its patrol mode makes it go through the main entrance and into the barracks beyond, engaging any enemies it encounters in melee combat.

Beyond the west sewer door is a barracks, containing two Gamorreans that may open this door themselves:

There's a locked weapons locker in the southeast corner of this barracks:

However, if Mission is in your party then she will open the locked door (otherwise impossible) in the south wall of the previous room to free Zaalbar before you can enter the barracks beyond:

You can now add Zaalbar to your party, at the expense of either Carth or Mission... but since Mission is required to lower the Force Field preventing you from continuing to the Upper Sewers, it's between him and Carth.

The Gamorrean compound also has a back entrance. Continue down the tunnel along the east boundary of the compound to the sewer door at its south end. Beyond this is a junction, with a central pillar blocking the view of four rakghouls and a rakghoul fiend on its south side:

Afterwards do not return to hideout to heal, as when you transit back these rakghouls can reappear. There's a skeletal corpse with random contents at the bottom of the ladder at the end of the cul-de-sac beyond the south sewer door.

The exit at the top of the ladder seems to be blocked with no way to clear it.

This can be passed on the north side without it exploding. The sewer door at the end of this tunnel opens to reveal a second chamber with water cascading into the middle of it, and a walkway around its perimeter with three rakghouls and a rakghoul fiend on it:

Again, these may reappear after leaving and returning to the area. Beyond the south sewer door is another cul-de-sac with a corpse with random contents at the end of it. Beyond the northwest door is a tunnel which turns north along the west boundary of the Gamorrean compound.

In the northwest corner are a corpse and skeletal corpse with random contents. The sewer door in the west wall is mined:

This can just about be edged around if you walk. The door is also locked:

Beyond is the barracks behind the Gamorrean chief's room mentioned earlier.

After rescuing Zaalbar from the Gamorrean Compound, exit it through its main entrance to the east and go north up the tunnel along its east boundary, then through the southeast sewer door in the room at its end. Beyond is a short tunnel ending in another sewer door. Both doors are mined:

So you need to access it with Mission in your party after saving Zaalbar:

Once the shield is lowered you can enter the Upper Sewers beyond it.

There's a sewer door in the east wall of the tunnel along the east boundary of the Gamorrean Compound, beyond which is a room which is mined:

You can edge around this easily enough to the rusted droid within:

This droid is a melee fighter whose patrol takes it through the main entrance of the Gamorrean compound into the middle of the barracks beyond the Gamorrean chief's room. It will explode the mine if it's still there, and it's perfectly capable of killing all enemies it encounters on its patrol without optimization or shields, even on Difficult. However, it's advisable to provide it with ranged support as it distracts the Gamorreans.

To the left of the mine is an Outcast corpse:

This journal is a record of the long and difficult search to find the Promised Land. It contains many half completed maps and cryptic notes, all attempting to decipher whether the legend is true or simply a child's fable. By itself this journal does not contain enough information to solve the mystery, however it could be a valuable piece of the puzzle.

In the east wall of the tunnel running south from the northeast entrance from the Undercity is a sewer door, beyond which is an empty room with another sewer door at its east end. Beyond this is a room containing three rakghouls and a rakghoul fiend:

Afterwards do not return to hideout to heal, as when you transit back these rakghouls can reappear. There's also a skeletal corpse with random contents and another Outcast corpse:

You can return to the Undercity and Rukil in the Outcast village.