A path exits the clearing to the southwest, turning south and ending at an intersection where three Wookiee corpses lie slain and the only remaining survivor, Grrrwahrr, duels a Mandalorian while two others watch:

Grrrwahrr kills the Mandalorian, and the other two now engage him in combat. You can help him with the Hidden Hunters, although he's invulnerable and may kill them both all by himself while the rest of the Shadowlands are explored (although all remaining Mandalorians can be sought and destroyed as you travel towards the Star Map to the southwest).

If you take the southeast path and encounter Freyyr, the Wookiee that Chuundar sent you to kill, before acquiring the Star Map, he can point you in the right direction if you spare him long enough to return and ask him about it:

He means you should go up the path to the northwest, then take the only remaining path into the lower Shadowlands at the intersection where Grrrwahrr fights the Mandalorians, to the southwest. Continuing southwest beyond another intersection with three Wookiee corpses and a clearing to the northwest, you'll encounter viper kinraths, the number of which depends on your character level:

Unless otherwise indicated, all other viper kinraths encountered in the lower Shadowlands are identical to these.

The computer hologram by the Star Map can actually be seen in the distance down the southeast path. As you approach it from the left, you'll find it's mined:

The southwest path first leads to a clearing, with a path to the southeast approaching the computer hologram from the right. 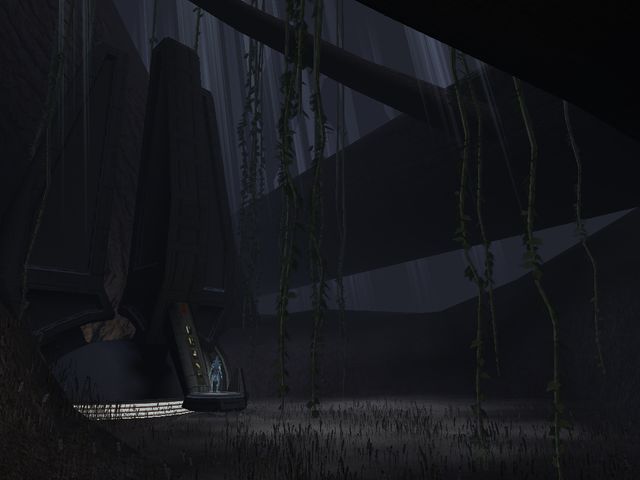 The computer hologram, with the Star Map behind it to the right, as seen from the path approaching it from the right.

This approach is also mined:

The Star Map is to the right of the computer hologram:

[The Star Map is sealed and cannot be opened.]

The only option is to talk to the computer. You can ask it questions:

However, it's only necessary to say you're seeking information about a Star Map, and what you need to do to get access to it, before beginning an evaluation:

The evaluation consists of three questions, beginning with the following:

While trusting Zaalbar is the wrong answer, the right answer moves you closer to the dark side of the Force:

The following responses end the evaluation prematurely, with violence:

However, it's best to continue the evaluation to move closer to the light or dark side of the Force:

Even a light side character should not give the following response, as it ends the evaluation prematurely:

Preparing your forces to attack in ten days but doing nothing in the city is the correct answer, and you can move closer to the light or dark side of the Force depending on the logic of your decision:

Answering the third and final question will also move you closer to the light or dark side of the Force:

If you answer the final question correctly, you move closer to the dark side of the Force, and the Star Map is yours:

Otherwise, two defense droids approach from the northwest to engage you in combat. They receive bonuses depending on your character level:

Both droids use their Environment Shield Level 3 (which makes them immune to Force Whirlwind as long as it's active) and their special weapons and grenades whenever possible. However, Jolee must be a member of your party at this time and he has Disable Droid even if you don't, which should make killing them a lot easier.

Due to the experience received, even a dark side character may want to threaten to take it apart to get the Star Map rather than answering the last question. Once the droids are killed, the Star Map is yours:

You have recorded the coordinates from the Star Map you found on Kashyyyk into a datapad.

Quest for the Star Forge[edit]

Take the southeast path from the first intersection to the south of the entrance from the Upper Shadowlands. It winds until you reach an intersection where you'll encounter viper kinraths, the number of which depends on your character level:

Down the south path from the intersection you'll see more viper kinraths at the corner to the west:

You'll also encounter more if you continue east until the path ends in a clearing to the southeast:

A path to the northeast is a dead end, down which you can see a lone Wookiee...

When you speak to the lone Wookiee, Freyyr, he first attacks you:

He receives bonuses depending on your character level:

After being reduced to 25% vitality or less (although it's closer to 30% at level > 12), combat ends and he speaks again:

If you're in Solo mode and none of your party are nearby, this is your first opportunity to kill him, moving (much) closer to the dark side of the Force:

He heals 75 vitality but loses any bonuses depending on your character level before continuing to fight to the death.

When you return to the Basket Up in the upper Shadowlands, Gorwooken takes you directly to Chuundar:

However, once you've killed Freyyr you'll receive no experience for recovering Bacca's blade after killing the ritual beast. Furthermore, although you'll move slightly closer to the dark side of the Force if you kill him here, you'll engage in much more combat and thus receive much more experience if you return Bacca's blade to him now but side with Chuundar later.

Otherwise, Jolee objects (and does so upon every response to kill Freyyr), or Bastila or Juhani will do so if he isn't nearby. However, the objections can always be overruled...

You can speak to him again about the Mandalorians, the Star Map if you haven't already acquired it (or the Computer if you have), or you can still decide to kill him for Chuundar:

Once you have Bacca's Sword Blade after killing the ritual beast, it can be returned to him:

When you return to the basket up in the upper Shadowlands, Gorwooken and two hidden Wookiees attack you:

They receive bonuses depending on your character level:

Gorwooken has Immunity: Poison... which is just as well, since the two Wookiees can use up to four Poison Grenades each. Any level > 8 Jedi in your party can use Improved Energy Resistance or Knight or Master Valor to give your party Immunity: Poison as well.

From now on, you'll use the basket yourself:

Back up on the Great Walkway, Chorrawl speaks as you approach him again, before taking you back to the Hall of the Chieftain to choose between Freyyr and Chuundar:

Take the path to the west then south of Freyyr and follow it around the corner to the west until you reach a crossroads. Across to the southwest is a dead end containing three viper kinraths:

The corpse of an exceptionally large viper kinrath, freshly killed.

If you've already spoken to Freyyr about Bacca's blade:

At the crossroads take the southeast path, which goes east before turning south and ending in a large clearing with a ritual marker and a dangling vine in its northeast corner:

Follow these instructions using the dangling vine, and the Ritual Beast will appear:

The ritual beast appears to the north, cutting off the exit to the clearing:

You or any level > 8 Jedi in your party should use Improved Energy Resistance or Knight or Master Valor to give your party Immunity: Poison. It in turn is immune to Force Push and Whirlwind and cannot be knocked back and down, but Force Wave can still damage and stun it. Conversely, its own Slam Attack can be a nuisance for melee attackers, knocking them back and down even when they save against it.

No experience is received for recovering Bacca's blade if Freyyr has already been killed.

This is part of Bacca's Ceremonial Blade, damaged due to the arrogance of Chieftain Rothrrrawr. He underestimated a creature in the Shadowlands (later dubbed the Great Beast), and lost the blade in its hide. The hilt remained in his court, passed to other chieftains. If both pieces could be found, the sword might be able to be reassembled.

Deesra may have warned you about the terentatek and told you about the Great Hunt for them before leaving Dantooine, and now that you've encountered one you may return to tell him about it. As you might expect, the remainder are to be found on Korriban...

Once Grrrwahrr has killed the first Mandalorian, you can search his remains:

He's invulnerable so he'll eventually kill the two remaining without help, but it's much quicker to join in:

Medical items are only received if unused. Grrrwahrr speaks to you:

Refuse to help to move closer to the dark side of the Force:

Alternatively, you can give him a medpac to move closer to the light side of the Force and continue the dialog:

This quest can also be activated and completed without healing him, but you won't receive experience or a reward from him for doing so.

Only the party leader needs to be unarmed for the hidden hunters to reveal themselves, and once they do so a weapon can be equipped again. There are two groups of three Mandalorians waiting in ambush to the south: there's a clearing containing three fallen Wookiees just down the southwest path; continue southwest beyond and then down the southeast path to the other.

The first ambush you encounter, regardless of location, consists of the following:

This Mandalorian to the west may use grenades, and like that to the east has Damage Resistance: Resist 25/- vs. Sonic, while that to the north has Immunity: Mind-Affecting. The latter two receive bonuses depending on your character level:

The second ambush you encounter consists of the following:

This Mandalorian to the north has Immunity: Mind-Affecting, and may use grenades. The others to the east and west are identical to those in the previous ambush.

This device attaches to a swoop bike, transmitting any field data that has been collected on it to the Commander.

Once both Mandalorian ambushes have been sprung and you have the swoop bike signal device, follow the paths to the west to a clearing lined by three Mandalorian swoop bikes. Those on the north and east sides can be ignored.

[The Swoop Bike is still warm to the touch. There is a Signal Device on it, however, it contains no field data to transmit.]

Placing the signal device in the swoop bike on the southwest side will cause the Mandalorian commander to appear behind you with the last two of his subordinates.

The Mandalorian on the left is identical to those to the west in the first two ambushes. The Mandalorian commander himself has Immunity: Mind-Affecting and Damage Resistance: Resist 25/- vs. Electrical, and may use up to three CryoBan Grenades. He and the remaining Mandalorian on the right receive bonuses depending on your character level:

This is the helmet of a fierce Mandalorian warrior, taken from a group that stalked the Shadowlands of Kashyyyk for wounded or unwary prey.

Return the helmet to Grrrwahrr to receive more experience and a reward (this requires you to heal him if you haven't already done so, moving closer to the light side of the Force):

He runs north to leave the lower Shadowlands.