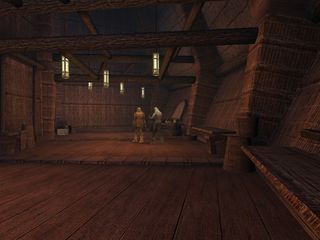 Woorwill in his home with Jaarak, whose back is to you on the right. The wicker basket is in the back corner on the left.

The exit to the village is in the east wall, and there's a wicker bin at the back of the room in the southwest corner:

Two Wookiees stand in the middle of the room. You can ask them questions about the lost Wookiee, Rorworr. The elder, Jaarak, stands on the right:

The younger Woorwill stands on the left, and he's more forthcoming:

Once Rorworr's remains are found in the upper Shadowlands, Woorwill can identify the bolt casing found on the body:

Jaarak can also identify the bolt casing... his own:

You can continue the dialog to accuse him of Rorworr's murder:

There's little point in speaking to either Wookiee after the bolt casing has been recognized, and even this isn't necessary as the same experience is received when Worrroznor, Holder of the Laws, whose home is to the east, recognizes the bolt casing and accuses Jaarak instead.