After selecting New Game from the main menu, you must generate your main player character by selecting sex and class: 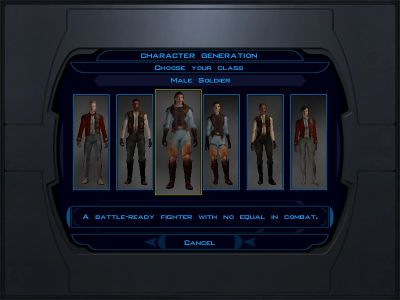 When you choose sex and class, bear in mind appearance can be changed later.

The sex of your main player character only affects flirting and romance with other characters during the game. Class is a much more significant choice, which requires more information than is presented at this point:

Selecting a quick character will obviously allow you to start playing more quickly, but the templates used are not optimized. Although you may still be able to complete the game without further research, your character will be much better if you can make your own informed choices. This is particularly true since later you will have to choose a Jedi class for your character during the game…

Regardless of whether you select a quick or custom character, you will now have to choose your character's appearance by scrolling sideways through the portraits for your chosen sex:

All 15 male portraits, including later changes in appearance as their alignment shifts toward the dark side of the Force.

All 15 female portraits, including later changes in appearance as their alignment shifts toward the dark side of the Force.

Portraits are the same for all three classes. Your choice may alter the appearance of some minor characters in the game, but otherwise it's simply a matter of personal preference. However, a portrait must be selected before you can proceed.

The attributes of your character apply bonuses or penalties to everything from combat to skill checks to Force powers. Check each attribute to see what aspects of game play it can affect. 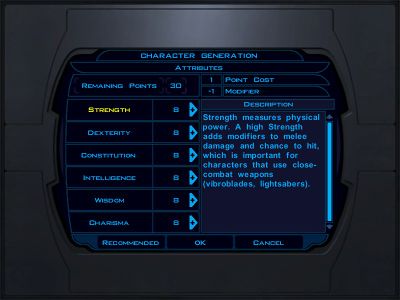 Only a custom character gets to control attribute allocation. Each of the six physical attributes is at 8, with 30 points to invest in them. Any attribute can be increased to a maximum of 18 at this time, but beyond 14 there are increased point costs:

All attribute points need to be allocated before you can proceed. Attribute allocation for a quick character is as follows:

Each of your character's skills has a number associated with it. This is the skill 'rank' and determines how good the character is with that skill. When using a skill to perform an action, the rank is compared against a Difficulty Check (DC) number. For example, to open a lock with a DC of 15, take your skill rank in Security + Wisdom modifier +d20 roll. If the total is 15 or greater, the lock is opened. 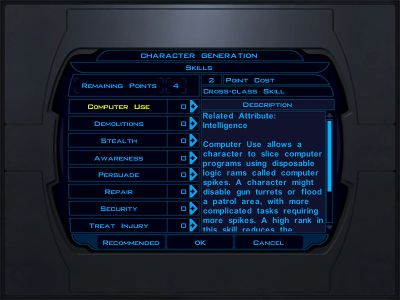 Skill points can be allocated by selecting a skill and using the arrows to scroll sideways and add or subtract points.

Only a custom character gets to control skill allocation. The number of skill points to be allocated depends on your character's Intelligence:

Selecting Recommended for a custom character will also apply these templates. For example, a Scout with the minimum of 8 skill points to allocate will automatically allocate 4 each to Computer Use and Demolitions; one with 12 skill points to allocate will automatically allocate those extra 4 points to Repair; and so on. These templates are not optimized, but skill allocation is not as critical to progress in the game.

Some feats allow you to use special items like heavy armor or implants. Other feats modify saving throws and skill checks during the game. And some feats (POWER ATTACK) are used during combat. Check the description for details on a specific feat.

A scrolling list will pop up to inform you that you have been granted the following feat(s) this level: 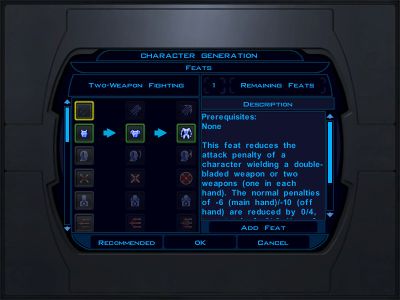 A feat can be allocated by selecting its button. Feats already granted are highlighted by a green box, while unavailable feats are greyed out and have no button to select.

Only a custom character gets to control feat allocation. The feat needs to be allocated before you can proceed. Feat allocation for a quick character is as follows:

Your character starts with a random name, and selecting Random Name will result in a new random name. A custom name can be typed, using a maximum of 18 characters (including any spaces). Names are case-sensitive and may contain any alphanumeric characters, and the following punctuation symbols:

Now there's nothing left to do but select Play to load the game and watch the first movie!