Star Wars: Knights of the Old Republic/Hall of the Chieftain 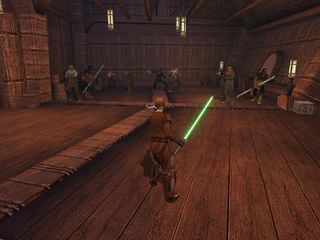 If Freyyr survives the lower Shadowlands, he and his sons Zaalbar and Chuundar have a family reunion. What could possibly go wrong?

You stand before Chuundar once again at the west end of the Hall of the Chieftain. Zaalbar stands to the left of him. A Czerka guard stands in each corner behind them, while you're flanked by a Wookiee guard with a warblade and another with a bowcaster on both sides. If you didn't kill him in the lower Shadowlands, Freyyr stands to the right of Chuundar:

You move closest to the light side of the Force by urging Zaalbar to convince them to talk it through:

You move closer to the dark side of the Force by prodding Zaalbar to side with his brother Chuundar against their father:

Aside from any party, your only allies in the hall are Freyyr and Zaalbar, although they're invulnerable at this point. The Czerka guard in each corner behind Chuundar uses a Zabrak Disruptor Cannon at range and a Stun Baton in melee combat:

Chuundar and the two remaining Wookiee guards using Wookiee Warblades, who can also use a Frag Grenade, receive bonuses depending on your character level:

While they surround and outnumber you, all are within radius of Insanity (character level > 11), Force Wave or Stasis Field (both character level > 14), which can be used to debilitate them all at once. The two Wookiee guards with bowcasters are extremely weak (only 8 Vitality) and should be killed in a single round (Force Wave will always do so even if their saving throws are successful).

Party selection opens, allowing you to add Zaalbar to your party again, although you remain in the hall so this isn't necessary.

You can speak to Freyyr again to ask about the Star Map if you haven't already acquired it (or the Computer if you have), and the Mandalorian hunters in the Shadowlands:

If Zaalbar isn't in your party and you can dominate minds, if you ask Freyyr about the reward then you can get him to pay you credits (although you'll move closer to the dark side of the Force even if you're only able to affect minds):

If you speak to Zaalbar afterwards, you can find out what effect this whole experience has had on him:

Exit the hall via the door in the east wall.

The Wookiee guarding the Chieftain's Hall is gone, but you can still speak to any other Wookiee, male or female:

If you speak to the Wookiee female wandering between the hall and the gates on the walkways below them:

So while she's more friendly than she may have been before, she's no more helpful.

If you speak to the Wookiee guarding the village gates upon exiting:

If you speak to the Wookiee guarding the southeast walkway to the Basket to the Shadowlands:

Gorwooken will be gone but you can now use the basket yourself to go down to the Shadowlands:

You can return there if need be, or go back to the Czerka landing port to the northwest.

Upon returning to the Czerka Landing Port, the Czerka guard captain and guard will be gone, as will everyone else, as Wookiee rebels overwhelm the landing platform:

Four Wookiee rebels engage in melee combat with four Czerka guards on the walkway between the gates and Janos' office. You can assist the rebels, although they're invulnerable and perfectly capable of dispatching the guards quickly without your help. Either way, you receive experience for the kills:

Three more Wookiee rebels with bowcasters engage another three Czerka guards further along the walkway, where Eli and Matton used to conduct business:

Once it's all over, a single Wookiee rebel stands in each location. Messengers can no longer appear for party members, and the rebels can comment but cannot be engaged in dialog.

The same applies to the two Wookiee guards now flanking either side of the Ebon Hawk's boarding ramp:

If you already killed Freyyr in the lower Shadowlands, you're brought before Chuundar by Gorwooken and there's no combat:

The only enemies are Freyyr and the two Wookiee guards with warblades flanking you on either side. Freyyr is a shadow of his former self:

The Wookiee guards receive bonuses depending on your character level:

Regardless of where Freyyr was killed:

You can ask about what you saw in the Shadowlands:

You only receive Bacca's Ceremonial Blade if you or Freyyr brought Bacca's Sword Blade up from the lower Shadowlands after killing the ritual beast. Otherwise, the hilt is given to Zaalbar so he has to be in your party (and nearby) if you return to the Shadowlands to kill the beast.

Party selection now opens, allowing you to add Zaalbar to your party again. If Freyyr was killed in the Shadowlands then this is your only chance to change your party until you return to the Czerka landing port via the Great Walkway, as you're now escorted outside the village, forbidden to return.

If Zaalbar is in your party and you speak to the Wookiee female wandering between the hall and the gates on the walkways below them, then the two may now interact during dialog.

If Freyyr was killed in the Shadowlands then the Wookiee guarding the village gates has been replaced by a green Twi'lek Czerka guard:

If you speak to Zaalbar, you can find out what effect this whole experience has had on him:

You can return there if need be, or go back to the Czerka landing port to the northwest.

Upon returning to the Czerka Landing Port, two Wookiees are escorted from Janos' office by two Czerka guards before he speaks to you again:

Go to top
← Lower Shadowlands | Hall of the Chieftain | Manaan →