A Rodian named Hulas stands alone on the south side of the East Central courtyard by the ocean. You can ask him questions about himself, the Republic, Sith and Selkath on Manaan, but this isn't necessary:

However, if you've encountered and killed Calo Nord, acquired a second Star Map and received a datapad from Senni Vek but ignored the instruction to come alone:

After removing your party:

If you refuse to swear to secrecy, this quest is no longer active. Otherwise:

You can ask some questions about the Genoharadan before committing:

Once you're ready to prove yourself worthy, he'll tell you about Zuulan Sentar and Lorgal:

Completing missions always moves you closer to the dark side of the Force, but the rewards from Hulas are substantial:

Even more experience and items are received from those killed. If you wish to complete some or all of these missions with a light side character, then you should do so as soon as possible after leaving Dantooine to avoid wasting light side points (since you normally move (much) closer to the dark side of the Force the closer to the light you already are), even on Dantooine itself: return later to claim the reward for destroying the Mandalorian Raiders, investigate the Sandral-Matale Feud and return the Strange Stowaway, but before acquiring your fourth Star Map (if Zuulan is your last mission, then you can kill him before completing these quests so that you only have to return to Dantooine once). Since you cannot acquire the Star Map on Kashyyyk or Korriban without squandering opportunities to move closer to the light, and Senni Vek cannot be encountered on Manaan, acquiring your second Star Map and encountering Calo Nord on Tatooine is recommended (although this means you'll visit Tatooine at least three times, rather than two).

He also answers more questions about the Genoharadan after completing missions:

This mission is entirely optional, as failing to complete it doesn't prevent you from completing the main Genoharadan quest (which is fortunate, since it's impossible once you're taken aboard the Leviathan). If you don't complete it before collecting your rewards for killing Vorn Daasraad, Rulan Prolik and Ithorak Guldar:

Zuulan's speeder can now be found parked at the northeast corner of the Matale estate in the Matale grounds on Dantooine. If you let him live for 200 credits, you cannot collect his bounty:

Trying to force him to give his bounty anyway results in being deemed unfit to join the Genoharadan:

This mission is optional, as failing to complete it doesn't prevent you from completing the main Genoharadan quest. If you don't complete it before collecting your rewards for killing Vorn Daasraad, Rulan Prolik and Ithorak Guldar:

However, this will most likely be the first mission completed since, unlike Zuulan Sentar, Lorgal is not only on the same planet, but in the same area: simply exit the courtyard to the north and the Republic Embassy is to the east. Once you've spoken to the diplomat Roland Wann and agreed to undertake a Mission for the Republic, you can open the door to the north and find Lorgal in the energy cage on the right by the north wall. Speak to him for a chance to move closer to the dark side of the Force before killing him:

You can kill him using Choke or Kill:

Otherwise, you'll need to use the control terminal to the right of his cage:

If you have insufficient Computer Spikes then trying to reprogram the cage repeatedly will move you closer and closer to the dark side of the Force.

If you try to use the computer terminal again:

Return to Hulas to collect his bounty:

Vorn's assault droid and speeder can now be found in the northeast corner of Sand People Territory on Tatooine.

Rulan can now be found in the Upper Shadowlands of Kashyyyk, to the southwest of Jolee's hut. After he runs away from you, if you return to try to collect his bounty:

Once you've finished the job:

This will most likely be the second or last mission completed since Ithorak is also on Manaan. After meeting Vek at Ahto East's swoop track registration and convincing him to set up a meeting, return to the Ebon Hawk and travel west to Docking Bay 26-B to meet and kill Ithorak, then transit back and return to Hulas to collect his bounty:

Once you've collected your rewards for killing Vorn Daasraad, Rulan Prolik and Ithorak Guldar, Hulas reveals his true purpose and status (although he has already told you if you bothered to ask):

However, having come this far you should not just let it go:

He *ahem* They await as you enter the Dune Sea from Anchorhead. Only a fool would take him at his word and come alone... unless it's to demonstrate your superiority:

Even with your party's support you'll be outnumbered more than two to one: 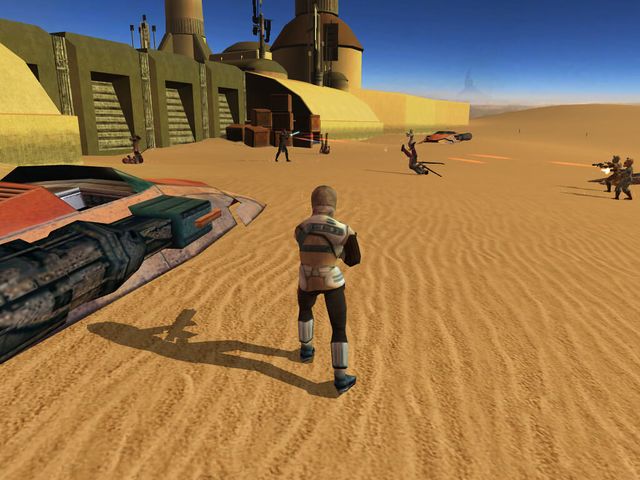 Who in their right mind comes alone and brings a knife to a gun fight? A. SITH. LORD. Idiots.

Two Genoharadan hunters, a ranged Rodian and a melee Trandoshan, are on your left:

Hulas is in front of you, flanked by a ranged Rodian thug on the left and J'ane Khan on the right.

The Ion Blaster in the off hand also inflicts Ion: +1-10 vs. Droid.

Medical items are only received if unused. Two other Genoharadan hunters, a ranged Aqualish and a melee Mandalorian, are on your left: