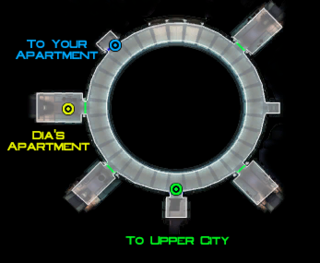 Map of the south apartments

Your hideout is behind the northwest door in the outer wall of the apartment complex ring. You will transit back here from other parts of Taris to heal your party (where this is possible).

Exiting your apartment for the first time, you witness an altercation between two Duros and a Sith soldier, who's flanked by two battle droids.

When paused during combat, you have your first opportunity to select Carth: based on his current equipment, Dexterity and feats he has already progressed towards using two blaster pistols. However, if you're a Scoundrel or otherwise have low Vitality, then when confronted with multiple opponents equipping melee weapons you may want to equip him with one or two melee weapons, at least temporarily, and have him lead, if only until you have another party member to take the front line.

You and Carth can kill one battle droid each in a single round, particularly if you're equipping the Ion Blaster from the Sith heavy trooper on the Starboard Section of the Endar Spire and Carth uses Power Blast. Then only the Sith soldier remains:

All three can be killed with a Frag Grenade, although this will also damage the Duros. The two battle droids will be killed even with a successful Reflex save, while there's 60% chance of killing the Sith soldier (otherwise, he'll be reduced from 15 to 5 Vitality).

If you wish to play without a party for increased challenge, this is your first opportunity to remove Carth. The Duros speaks, thanking you.

You can exit the apartment complex via the Upper City elevator to the south, although it's advisable to explore each map more thoroughly to maximize your chances of receiving experience and items, rather than simply passing through as quickly as possible.

The apartment complex is a ring, with the doors to four apartments (excluding your hideout) and the elevator to the Upper City in the outer wall. The latter is to the south, and the quickest way to reach it from your apartment is to run anti-clockwise around the ring, hugging the inner wall to avoid Larrim speaking as you pass. The ring is patrolled by a maintenance droid:

The aliens encountered are slightly more talkative, but only Larrim and Kadir the janitor can be engaged in dialog.

There are four other apartments accessed via low security doors in the outer wall of the apartment complex ring.

Any character who spent even a single point in Security (including Carth) can unlock them. They can also be bashed open, although this may be more time consuming this early in the game.

The northeast apartment is unoccupied but contains a footlocker, the southeast one contains an Ithorian and a bag, while that to the southwest contains a Twi'lek and a bag:

The contents of all containers are random, although they were generated with the map. Surprisingly robbery doesn't result in any shift in alignment, although you may want to forbear if you're role-playing a light side character.

Dia's apartment is behind the door to the west, and unlocking rather than bashing the door allows you to enter and look around first, finding another bag with random contents. Otherwise, Dia confronts you immediately.

If you haven't spoken to Zax in the Bounty Office about Dia's Bounty:

After asking Dia who Holdan is, and what she means:

You always have at least 40% chance of success, regardless of Persuade rank or character level, and even if you fail you can just try again, or threaten her to move closer to the dark side of the Force:

You can speak to Holdan for her, not get involved or collect the bounty on her head:

You'll find Holdan in the music room to the north in Javyar's cantina in the Lower City. You can return to hideout after leaving the cantina, then go anticlockwise to the right to return to her apartment most quickly:

Once you've paid Holdan out of your own pocket, or you or Bastila persuaded him to remove the bounty, you can choose between a reward or moving closer to the light side of the Force:

Alternatively, you can collect the bounty on her head, although you’re still given opportunities not to get involved, or to change your mind about helping her:

Dia leads with a melee Attack before drawing her Vibroblade. If you're playing without a party and you haven't exited the apartment complex yet, you can lead her out of her apartment to the left and she can become engaged with the surviving Duros, who can kill her single-handed. You still receive experience for this, but it isn't recorded in Feedback.

You can go to Zax in Javyar's cantina in the Lower City to collect the bounty.

You can see Larrim, a green Twi'lek male merchant, to the south of your apartment, and you pass him as you travel counter-clockwise towards the Upper City elevator to the south. Approaching him will automatically trigger a dialog, at the end of which you may see what he’s got for sale.

Larrim's items cost 10% extra to buy, so think twice before doing so. Items that cannot be bought anywhere else on Taris are highlighted in bold, although the Energy Shields about which Larrim spoke can be received from various remains and other containers later on; there’s no need to buy one here.

You can see the janitor, an elderly human male, to the east of your apartment, and you'll pass him as you travel clockwise around the apartment complex ring. Antagonizing him may be fun, or in character if you're dark side, but being friendly from the start or apologizing allows you to ask some questions and get directions to the cantina and Kebla Yurt's store in the Upper City (although these should hardly be necessary).