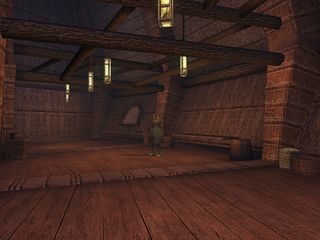 The Holder of the Laws, Worrroznor, in his home. The wicker basket is on the right.

The exit to the village is in the east wall, and there's a wicker basket by the north wall:

Worrroznor stands in the middle of the room. You can ask him questions about the lost Wookiee, Rorworr:

When you return after finding the remains of Rorworr in the Shadowlands below, you can ask who owns the bolt casing found on the body and tell him where you found it, initiating a trial:

You can alternate between the following responses to move closer to the light side of the Force repeatedly (although this would obviously be an exploit):

Jaarak won't say anything in his own defense, but if you do so on his behalf and present Rorworr's datapad as proof, you move (much) closer to the light side of the Force:

If you later speak to the male and female Wookiees of the village, then they comment on the outcome:

Otherwise, you can withhold the evidence and condemn Jaarak to death, moving closer to the dark side of the Force:

If you later speak to the male and female Wookiees of the village, then they comment on the outcome:

Regardless of the outcome, experience received varies depending on whether or not the bolt casing was already identified and Jaarak accused in Woorwill's Home before coming to Worrroznor. However, the final experience received is always the same (1800 in total).

If you speak to the wandering Wookiee female in the village: