You enter at the north end of West Central, with the door to the docking bays behind you. The exit to Ahto City East Central, the location of the Republic Embassy, may be revealed on the map to the south and east. However, it's worth going to Ahto West first to activate some quests which can be completed as you continue the quest for the Star Forge.

The corridor to the south ends in a door to the visitor's area, which contains the first of many rectangular water pools seen throughout the city. Cleaning and security droids patrol.

The Pazaak player Jolan Aphett stands to the left of the pool by the east wall. You can wager with him or play a practice game, or buy a deck from him if you don't already have one.

There's a door exiting the visitor's area in the south wall, beyond which is the port official.

Although you can buy a Pazaak deck from Jolan Aphett if you don't already have one, it isn't recommended as you can pay much less elsewhere (or even get one free if you're persuasive enough).

Beyond the door exiting the visitor's area to the south is another to the port official. A much larger, armed security droid stands in the southwest corner, to the right of the gate to Ahto city in the south wall, opposite the entrance behind the central pillar.

The door is locked, so you need to speak to the port official in the kiosk on the east side.

You can tell him you'll follow the rules, or learn more about them now or after paying the docking fee.

You can simply pay the docking fee, and receive the Manaan vistor's guide:

However, while he can never be persuaded to reduce the fee, it's easy to persuade him you don't need to pay it at all using the Force:

The gate to Ahto city is now unlocked, and beyond is another rectangular pool in a large open courtyard bordered by the ocean to the south. 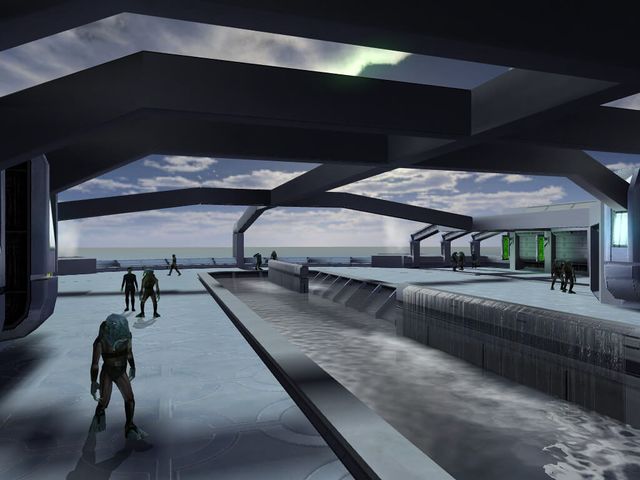 First sight of open water after disembarking on Manaan.

Wandering Selkath cannot be engaged in dialog, but can comment.

To the southeast of the north entrance to the courtyard are another friendly Selkath and a traveler, who can comment on significant events resulting from your quest for the Star Forge.

A walkway exits east from the courtyard in its southeast corner, leading to a door to the East Central courtyard. A Sith soldier patrols between this door and that to the West Courtyard.

A corridor exits the courtyard to the west, turning northwest to the door to the West Courtyard. There's no need to speak to anyone encountered along the way.

Around the corner to the southwest of the north entrance to the courtyard are two Selkath.

They stand to the right of the door to the Kolto Distribution Center in the north wall. Two Selkath stand to the left just inside.

A Selkath coordinator stands in the northeast corner.

Another Selkath like those outside the door stands to the west. Two Republic soldiers move back and forth between here and the plasteel cylinders to the right of the door to Ahto City East Central.

Two Sith soldiers move back and forth between here and the plasteel cylinders in the southwest corner of the visitor's area to the north.

Two Selkath like those just inside the door of the Kolto Distribution Center stand in the southwest corner of the courtyard with another traveler.