The Ebon Hawk is in Docking Bay 26-C. Going through the door in the south wall allows you to enter (and later exit) the Ahto City security zone.

Beyond the door to Docking Bay 26-C is the east end of a long corridor connecting to two other docking bays and the rest of Ahto City itself.

Upon first arrival on Manaan, a Republic soldier and a Sith soldier are arguing in front of the door.

The Sith soldier walks off to the west, while the Republic soldier turns and speaks to you. You can ask a few questions about why the Sith are on Manaan, Ahto City and the Selkath, and the Star Map.

However, the following will tell you all you need to proceed:

If you try to speak to the Republic soldier again, he just directs you to Rolan Wann at the Republic Embassy again:

Another Republic soldier is at work at the east end of the corridor:

A number of security and cleaning droids patrol the corridor:

While the east end of the corridor is a dead end, to the west it ends in a door, with a Selkath merchant standing to the left of it by the south wall.

Beyond the west door, the corridor continues. Once you've passed another Selkath, named Nubassa (who may help you with your trouble with gizka), you'll see a door in the north wall to Docking Bay 26-B and another in the south wall, beyond which is a corridor leading to the West Central courtyard, en route to the Republic Embassy. The corridor continues to the west, through another door to Docking Bay 26-A.

The corridor continues to a dead end in the west. Going through the door to Docking Bay 26-A in the north wall allows you to exit (and later enter) the Ahto City security zone.

Beyond is another door, which is locked.

However, after speaking to Roland Wann from the Republic Embassy in the East Central courtyard and agreeing to undertake a mission for the Republic, you receive a key which opens this door. 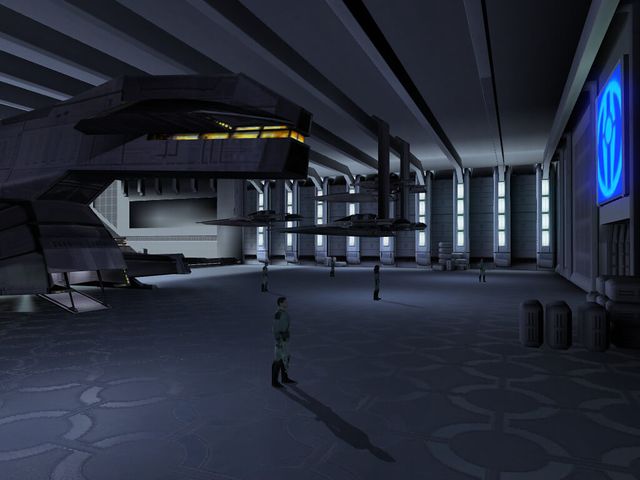 The hangar, as seen from its southwest corner.

The transport is to the left, in the northwest corner of the hangar. However, it's guarded by a trio of Sith elite troopers to the left, right and center, a Sith grenadier to the northeast, and a Dark Jedi apprentice closer to the door. The Sith are spread out and attack from range so while grenades and area of effect Force powers aren't as effective as they normally are, it's a perfect opportunity for a Jedi Guardian to use Force Jump.

The apprentice doesn't appear to use Force powers, so the priority target is the grenadier since he can throw up to three Thermal Detonators.

Once you've left the hangar you won't be able to return, so choose your party wisely. The secondary entrance to the Sith base is mined, so one of your party needs Awareness rank 10 to detect this if you don't want to trigger anything; Deadly mines may be encountered elsewhere, requiring rank 20. There are also opportunities to use computers and repair, which can assist with the inevitable combat.

As you pass the Selkath merchant, you may encounter a messenger for a party member if unlocked by dialog.

Aside from letting you see his inventory, he can tell you about Ahto City and Manaan.

The Selkath Nubassa to the left of the exit south to the West Central courtyard seeks exotic species for a zoological compound:

Once you've disembarked on Tatooine and Jor Ul Kurax has mistakenly shipped a delivery of gizka to the Ebon Hawk's hold, you can see if he's interested in taking them off your hands:

You'll have to persuade him using your own skill or the Force.

He'll take them off your hands if you provide him with 100 credits, whether you agree to do so outright, after failing to persuade him he doesn't need any credits (or that he should give them to you), or suggest paying him yourself:

However, he doesn't need any credits if you're more persuasive or you can dominate minds, or in the (highly unlikely) event that you don't even have 100 credits.

If you lie successfully you can also agree to have him take them for free, or do so after failing to persuade him to pay you, moving closer to the dark side of the Force:

However, if you were able to lie successfully then you should easily persuade him to pay you. If you're highly persuasive instead, you can do so without lying and moving closer to the dark side of the Force.

This is the best outcome, but however you manage to convince Nubassa to take the gizka off your hands, once he has done so he leaves the area.

Going through the door to Docking Bay 26-B, in the north wall opposite the exit to the West Central courtyard, allows you to exit (and later enter) the Ahto City security zone.

To either side of the door is a computer terminal, operated by a human Sith soldier on the left and a Twi'lek on the right:

Once you've met Vek in Ahto East's swoop track registration and he's agreed to set up a meeting between you and Ithorak, you can meet him in the hangar. You can simply go in after approaching Vek and the assault droid standing outside, or you can take an opportunity to isolate Ithorak:

Vek can always be bribed or persuaded using the Force to abandon Ithorak:

The assault droid remains, and since Vek is no longer there to command it you can reprogram it:

Either way, the assault droid will enter the hangar and kill Ithorak for you:

[Now that Ithorak is dead, you have no further use for this droid. Someone will probably remove it in time.]

However, you always receive more experience, and an opportunity to move closer to the dark side of the Force, if you kill him yourself:

This datapad has a single message on it:
"Someone has discovered that you are more than you claim to be. Watch your back, because you know Vek is too incompetent to watch it for you."

Most experience is received by simply going in with Vek and the assault droid and killing them as well:

You always move closer to the dark side of the Force after Ithorak is killed:

Return to Hulas in the East Central courtyard to collect his bounty.