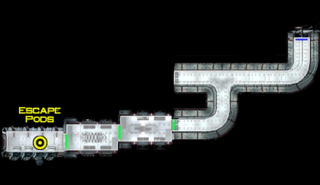 Map of the starboard section of the Endar Spire

If you didn't spend any points in Stealth at character generation, then when you go south and around the corner to the west, you'll need to run past or kill the Sith trooper guarding the intersection ahead:

As with the Sith in the Command Module, all those in the starboard section equip special Blaster Rifles with Damage: Energy, 1, Damage Bonus: Energy, +1 and Attack Modifier: -5 which don't apply more damage on a critical hit. However, their melee weapons are now much more accurate and damaging, and you can be killed.

If you did spend points in Stealth at character generation, you'll have a Stealth Field Generator and Carth can tell you how to use it:

You should save game before turning the corner, because although the next three Sith you encounter all have Awareness rank 0, even a Scoundrel with 18 Dexterity can only have maximum Stealth rank 9 at this point, which isn't guaranteed to escape detection; if you don't have Stealth rank > 0 (8 Dexterity), you can't escape detection at all.

Fortunately explosions at the end of the corridor to the west will draw the Sith trooper away, allowing you to get to the intersection he was guarding and go down the south corridor while he's at a distance with his back turned. You can come back and kill him later if you like (although he'll disappear if you don't do so before opening the door to the escape pods).

Around the corner of the south corridor to the west is a door, beyond which are two Sith soldiers in a room. If you open the door and you're able to sneak past them, you'll gain experience.

It's advisable to kill them before trying to open the door at the west end of the room:

Upon doing so, Carth gives you a warning:

A third option is to use Security to unlock the door:

However, since it has DC 28 this is only possible for a Scoundrel with Security rank > 7 (rank 4-5 and 16-18 Wisdom) without using a Security Spike (Xbox only). The door in the transport module beyond will remain locked until all Sith troopers within are dead, so you can't sneak past them using Stealth.

To assist with the first two options, search the footlocker against the north wall to the right of your entrance:

If you got the parts from the parts pile in the Command Module, you now have everything you need to fully pursue either or both of these options, regardless of your Repair and Computer Use skill ranks.

The damaged assault droid to which Carth referred is standing in the northwest corner to the right of the locked door. Using it can give you a Repair tutorial and allow you to reactivate it:

You can activate its shields and engage its patrol mode if you have sufficient Parts, but the former isn't necessary since the droid will activate its shields itself upon engaging in combat, and even on Difficult its Defense and Vitality are so high it can kill all Sith troopers in the transport module beyond single-handed, each with one hit.

The patrol takes it into the transport module, opening the door for you and engaging the Sith troopers beyond. Note that while you'll receive XP for those killed by the combat droid, this is not recorded in Feedback.

The terminal to which Carth referred is standing in the southwest corner to the left of the locked door. Using it can give you a Computer Use tutorial and allow you to view the starboard transport module, and overload its power conduit if you have sufficient Computer Spikes:

The camera feed now allows you to watch as the overloaded power conduit electrocutes all of them! You'll also receive XP for all those killed, and this is recorded in Feedback.

The door will now be unlocked. Should you opt to unlock the door yourself or activate the combat droid and engage its patrol mode and support it instead, you'll still be confronted by four of the following:

The two flanking the Sith Heavy Trooper each have a Medpac in their inventory, which they'll use when reduced to less than 50% Vitality.

The two closest Sith troopers are too far away from the others to make using Frag Grenades on them particularly effective, but throwing two at the Sith heavy trooper will also damage the two Sith troopers flanking him, and there's ~59% chance of killing all three outright (even in the event of two successful saves, each will be reduced from 25 to 5 Vitality). You cannot open the door in the west wall until all have been killed.

Now open the door to the escape pods:

The last escape pod is the second on the left in the south wall:

After using the escape pod, a cutscene plays of the final destruction of the Endar Spire as you hurtle through the atmosphere to crash-land in the ecumenopolis of Taris.