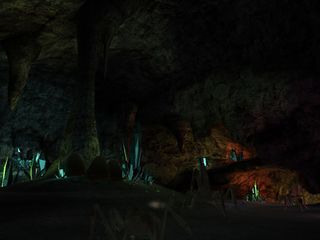 The crystal cave at the end of the passage east

You enter from and exit to the Sandral grounds at the southwest end of a passage leading east. As you head east you'll encounter two kinrath 'spiders', which only have four legs and an extendable proboscis used to attack and poison prey: any level > 8 Jedi in your party should use Improved Energy Resistance or Knight or Master Valor to give your party Immunity: Poison.

You'll encounter another pair of kinraths as you continue down the passage to the northeast:

At the east end of the passage is a cave filled with crystal formations with a rock pillar at its center and a pool on its south side. There are also four more kinraths here, two to either side of the pillar, to the north and south, and a hive kinrath on the east side:

The remains of a Mandalorian can be found in the southeast corner:

There are also six crystal formations in the cave, by the outer northwest and northeast walls, under the ledge to the east, by the edge of the pool to the south and by the north and southeast faces of the central pillar:

[You have acquired a lightsaber crystal.]

Finally, there are also 14 kinrath eggs:

[These fragile eggs could be easily destroyed, snuffing out the innocent life within.]

These can be bashed, resisting 5 damage but with only 1 Vitality:

[A crystal is found in the remains of the egg.]