The basket back up to the Great Walkway is in a clearing at the west end of the upper Shadowlands. If you haven't encountered Calo Nord since escaping Taris then he'll await you by the campfire in the south of this clearing, ambushing you immediately upon arrival; Darth Bandon does likewise at a later stage in your quest for the Star Forge.

Gorwooken remains standing by the basket, and he can take you back up to the Great Walkway if you approach and ask him.

A path exits the basket clearing to the north. Around a hairpin bend to the west you'll have your first katarn encounter, the composition of which depends on your character level:

All katarns regenerate 2 vitality every six seconds once damaged.

Just beyond the katarns there's a corpse by the inside corner of the path as it turns north.

The path opens into a clearing to the north, where you'll see something unexpected. 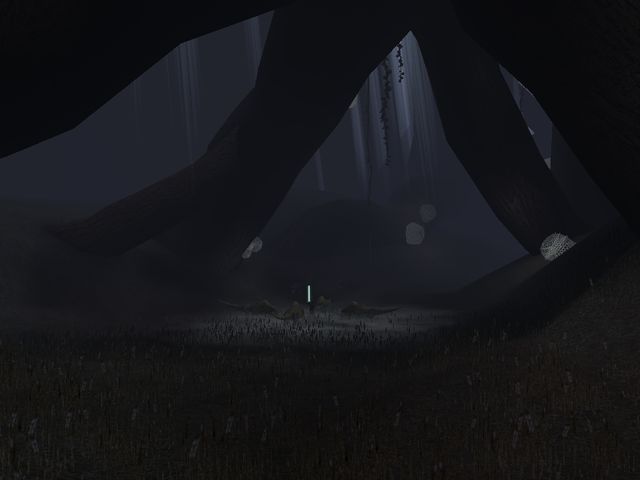 A lone lightsaber illuminates the dangers of the Shadowlands.

The stranger fights and kills the four katarns single-handed as you approach, before speaking to you briefly to introduce himself and suggest you follow him to his camp.

Jolee runs off down the path exiting the clearing to the east. When you follow him you'll pass a corpse on the north side of the path, to the left.

The path leads to another clearing to the southeast, in which there is some rubble.

There are paths exiting the clearing to the northeast and southwest, and Jolee runs down the latter to his hut (the northeast path leads to the Czerka Hunting Ground).

The path exiting the clearing to the southwest turns southeast and then opens into another clearing. Jolee stops and waits outside the door to his hut on the west side. You must speak to him:

The following responses will bring him to the point the quickest:

If you continue or return to speak to him:

You can ask for information about problems on Kashyyyk, including a lost Wookiee after you learn his name or find his remains:

Otherwise, you need to remove the Czerka poachers from the upper Shadowlands before you can proceed to the lower.

If you take the northeast path from the clearing in which you first encountered Jolee, to the north of his hut, after passing a Wookiee corpse on the west side to the left you'll have a katarn encounter, the composition of which depends on your character level:

The path turns east then southeast, where the approach to the Czerka camp is mined:

As you approach the camp, Commander Dern challenges you:

That response ends the dialog most quickly and allows you to move on. He's accompanied by five guards, each guarding a Czerka sonic device (three on the northeast side and two to the southwest).

You can continue or return to speak with him about tach poaching, and ask questions about the Shadowlands.

You can also speak to any of the guards.

If Jolee has already made his request, asking the following of Commander Dern or one of his guards will indicate how it can be fulfilled:

Jolee would prefer a peaceful solution, which can be achieved by persuading or bribing two guards to give you the code to their emitters. However, do not bother bribing them since Persuasion is always successful with > 9 Charisma (so even with 8 Charisma, anyone can succeed after any Jedi in the party uses Force Valor).

Once you have two codes, you can use them to shut down the corresponding emitters.

SYSTEMS SHUTTING DOWN.
THIS EMITTER HAS BEEN DEACTIVATED.

With the protective field shut down, a large beast charges through the camp, causing the commander and his guards to flee.

Alternatively, you can move (much) closer to the dark side of the Force by affecting the minds of the guards to make them leave.

Commander Dern uses his Energy Shield and guns down the deserter.

Deserter! Traitor! I'll make an example of you!

After the first is killed, you won't be able to persuade the others to follow his example without dominating their minds.

Once all five guards have deserted and been gunned down, their commander has no choice but to leave.

Otherwise, you can move closest to the dark side of the Force by persuading all but one guard to leave, then provoking a fight with the commander.

Any two of those responses will provoke the commander, as will the following:

Alternatively, you can provoke a fight with the remaining guard(s).

Only Commander Dern needs to be killed to fulfill Jolee's request. He uses his energy shield if he hasn't done so already.

Two guards, one on the center left and the other on the top right when seen from the west end of the camp, start with Blaster Cannons. The two white guards on the bottom right and top left start with Blaster Pistols, and may use up to three Concussion Grenades each. The remaining guard on the bottom left also starts with a blaster pistol, but has no grenades.

There are three metal boxes on the southwest side of the camp, only the right of which is unlocked.

Once the poachers have been removed from the Czerka camp at Jolee's request, he will join your group.

If the poachers were removed violently, your response to Jolee can move you even closer to the dark side of the Force.

This character must be a member of your party at this time.

You can now travel back through the Czerka camp and continue east to the repulsor field preventing access to the lower Shadowlands beyond.

The path beyond the Czerka camp continues to the southeast before turning northeast, where it's mined.

The path to the northeast turns east then south, where it's mined once again.

The path south is obstructed by a force field. If Jolee has not yet been added to your party:

Once Jolee's request to remove the poachers from the Czerka camp has been fulfilled and he's added to your party, he can remove it and take you through.

You go through to the lower Shadowlands beyond.

There are up to 17 tachs scattered throughout the upper Shadowlands.

This gland was cut from the corpse of a tach, a small primate. It can supposedly be powdered to produce a powerful stimulant.

There are also three tach glands in the middle locked metal box on the southwest side of the camp, which can also be sold back to Commander Dern. However, once you've reunited Mission with her brother you may want to bring him one, in which case you should leave one tach alive, or take (but don't sell) the three glands in the box if you don't want to displease Jolee by killing any tach.

This quest is completed automatically when you fulfill Jolee's request to remove the poachers.

There's a Wookiee corpse on the west side of the northeast path leading to the Czerka hunting ground.

You can look at the slaver contract in your inventory:

This datapad card contains a contract to trade weapons for slaves, and a manifest of goods already delivered. It would seem that Rorworr had sold a number of Wookiees previously, and intended to do so again.

You can also look at the bowcaster bolt casing:

This bolt casing was abandoned next to Rorworr's corpse, likely by whoever killed him. Bowcasters and the accompanying bolt casings are very personal items among the Wookiees, and are adorned with traditional family symbols and other identifying marks. It is possible the owner of this one could be identified by a knowledgeable Wookiee.

When you return to the village of Rwookrrorro you can go to Woorwill's home to ask Woorwill and Jaarak about the bolt casing, although this isn't necessary and you can go straight to Worrroznor, the Holder of the Laws, to do so: however, if you kill Freyyr in the lower Shadowlands (moving (much) closer to the dark side of the Force) before returning, then this becomes impossible. This quest will still be completed, but without moving closer to the light or dark side of the Force, or receiving a reward or any more experience (although no experience is received for any part of this quest completed after killing Freyyr upon your return either).

A broken droid lies at the junction of the path to the south of Jolee's hut.

If you haven't already spoken to Eli Gand in the Czerka landing port above:

If you have spoken to Eli, or you then ask what happened to it:

It plays back the cause of malfunction again.

Although doing either of these things will unlock new dialog with Eli when you return to him, it's better to salvage the droid's head as well.

The energy discharge inflicts 10 points of universal damage (on Normal) to your party.

Replaying the last memory of this damaged droid reveals that it and its owners were the victims of an ambush by someone named Eli. The name "Matton" was also mentioned.

You should return to Eli before returning Bacca's blade to Freyyr in the lower Shadowlands if you plan to side with him against Chuundar (moving (much) closer to the light side of the Force), as he and Matton will be gone afterwards. This quest will still be completed, but without moving closer to the light or dark side of the Force, or receiving any more experience or a reward.

The east fork of the path to the south of Jolee's hut leads to a katarn encounter, the composition of which depends on your character level:

The path then turns south and ends in a clearing with two corpses with random contents, and another katarn encounter:

The west fork of the path also turns south. Once you've proven yourself worthy of the Genoharadan by completing a mission, there's a Wookiee corpse on the west side of the path as it turns south; otherwise, there's only a corpse with random contents a little further south.

This datapad appears to be a diary or record of some kind. The final entry is of particular interest:
"We were fools to come down here, all of us. How can we hope to capture an enemy that can assume any shape, any form?

To the south is a clearing, in which there appears to be a Wookiee named Grarwwaar standing by a campfire. If you speak to him:

If you found the datapad on the Wookiee corpse, you'll know there's more to him than meets the eye:

He shifts into the form of Jolee Bindo, then attacks:

Once he's reduced to 50% Vitality, your party is knocked back and down as he shifts into the form of a Terentatek!

He's immune to Force Push and Whirlwind and cannot be knocked back and down, but Force Wave can still damage and stun him. Once at least 200 damage has been inflicted, your party is knocked back and down again as he shifts into the form of a Tach and runs off to the northeast, so quickly that you might lose him. He can be found in the clearing at the end of the path to the northeast of Jolee hut, which is also the site of yet another katarn encounter:

Speak to any Tach in the clearing to find Rulan:

Return to Hulas in Ahto City's East Central courtyard on Manaan to collect his bounty.