After completing the third of your Jedi Trials and reporting back to Master Zhar Lestin in the training room of the Jedi enclave, you must follow him back to the Jedi Council chambers and speak to Master Vandar Tokare to continue:

The party selection screen opens, and Bastila is available again. Before you can leave, Ahlan Matale approaches the Jedi Council and it's also decreed that you should investigate the Sandral-Matale Feud (although this is optional).

If you then talk to Bastila about your shared dream:

The last two responses will end the dialog at any time, never to be repeated; otherwise, the dialog loops, allowing you to explore all possible options.

If you returned to Ebon Hawk from the grove then you can transit back there and travel north to the outer courtyard, then east to the strange ruins. Otherwise, when you exit the enclave to the south again before traveling east, you may notice that Nemo is missing....

If you enter from the plains beyond the courtyard outside the Jedi enclave without Bastila in your party, the party selection screen opens and she is automatically added. If you try to remove her:

This character must be a member of your party at this time.

Otherwise, you cannot change party selection or return to Ebon Hawk once inside the ruins. The exit is beyond the north door behind you after you enter, with another door at the south end of the entrance hall, beyond which is an ancient droid standing in the middle of a square chamber with doors to the south, east and west. It tries to communicate with you as you enter:

You will be finding Nemo's remains in the northeast corner:

If you speak to the ancient droid again at this point, you can still ask some of the previous questions, about itself, the Builders, the Star Forge and how to prove yourself worthy and unseal the doors:

If you try to open the south door, Bastila speaks:

If you try again:

[This door is sealed with an ancient mechanism.]

The south door remains locked, so your only other options are the Exit to the ruins or to open the west and east doors.

Beyond the west door is a chamber with an ancient terminal at its west end, guarded by a guardian droid.

Beyond the east door is a similar chamber with another ancient terminal at its east end, guarded by another guardian droid:

However, the east chamber has a collapsed beam splitting it in two from north to south. It can only be passed on the south side, where the guardian droid stands, and on the other side is the wreckage of another droid (suggesting Nemo at least put up a fight).

Both active droids begin by using Energy Shield Level 2, absorbing the first 30 points of energy damage: they're also immune to Force Whirlwind as long as this is active. However, even when shields are down they have Damage Resistance: Resist 15/- vs. Energy, so energy weapons (most blaster pistols, blaster rifles, heavy weapons and lightsabers) are still ineffective.

However, you can return the favor if you or Bastila are character level > 8 and have Improved Energy Resistance, as this trivializes all damage of which the droids are capable: their Carbonite Projector and Flame Thrower won't damage at all if a successful Reflex save is made against DC 15, and only a maximum critical hit will result in a single point of energy damage from their ranged attacks (and none at all with Improved Toughness or Zaalbar's Wookiee Toughness).

Both ancient terminals are accessed in the same way:

The west terminal asks you to identify the three death-giving, and the east one the three life-giving, from a list which includes all six:

If you identify the wrong seed world type:

You exit the terminal and another guardian droid will appear if you've already killed the first one. Otherwise:

You'll exit the terminal. If you try to use it again:

Once both seals are broken, return to the south door and as you approach, it opens, killing any remaining guardian droids if you haven't already done so.

If you speak to the ancient droid again:

You can still ask the ancient droid some questions about itself, the Builders and the Star Forge.

Beyond the south door is another square chamber with a door in its south wall, beyond which is another, longer, chamber. As you walk into it, you'll see a device standing at its south end which activates as you approach. 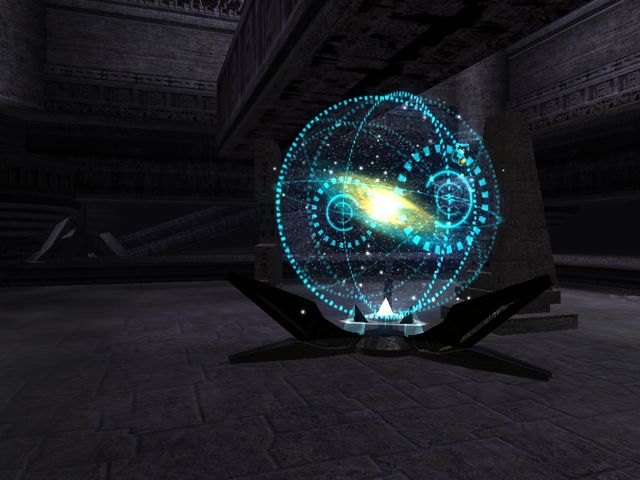 Open your journal and select Star Map: Dantooine from Quest items to read the following:

You have recorded the coordinates from the Star Map you found on Dantooine into a datapad.

Exit the ruins to the north and return to the Jedi Council to begin the quest for the Star Forge...