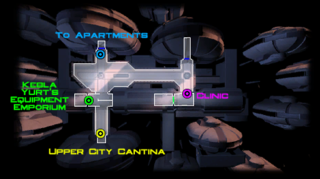 Map of the south Upper City

The elevator from the South Apartments takes you to the northwest corner of Upper City South. 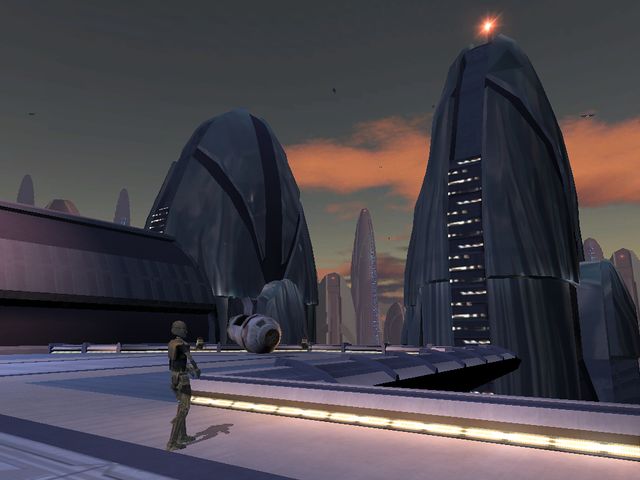 Upon entering from the South Apartments, when you turn to your right you notice a crashed Republic escape pod (presumably yours) being scanned and scavenged by two salvage droids. A protocol droid stands in the foreground.

If this is your first time and you questioned Kadir, the janitor of the South Apartments, you may follow his directions and go south to the Upper City Cantina, perhaps visiting the Equipment Emporium on the way there or back.

However, you can delay visiting the cantina and emporium until the search for Bastila is complete and you're seeking Canderous in one of the cantinas to see about escaping Taris.

Otherwise, you may head east and then north for the entrance to Upper City North, hugging the left of the entrance to avoid being drawn into an altercation between a bullied merchant and two bounty hunters on the other side.

The men and women on the streets of the Upper City may comment on Taris, but they cannot be engaged in dialog. Unsurprisingly, patrolling Sith troopers are even less helpful.

The salvage droids by the crashed Republic escape pod share no insight into it:

[The salvage droids are busy scanning and scavenging the remains of this Republic escape pod.]

Protocol Droids can be more talkative and informative, although you don't need to speak to one.

You're notified of this 'quest' immediately upon arriving in the Upper City:

Returning to the entrance to your hideout in the south apartments at any time warps you (and any party) back there, fully healed, and completes this quest. You receive no experience for this, but it's instructive if this is your first time.

Travel south towards the Upper City Cantina and you'll pass the Equipment Emporium on your right. Open the door in the west wall to reveal Kebla Yurt standing behind a desk in the middle of the Emporium, and the shop droid:

[This droid is too busy performing its assigned duties to speak with you.]

Kebla Yurt herself is normally much more talkative:

It's not necessary to buy anything since many of these items (and better) can be acquired while exploring Taris. However, if you ever feel the need, you can return to the entrance of your hideout in the south apartments and take the elevator to the south back to the Upper City, then transit back to your previous location immediately upon returning to the apartments.

You can also ask some questions, although this isn't necessary either:

Continue south past the Equipment Emporium to find the door to the Upper City Cantina, with a Sith trooper standing to your right:

This business doesn't involve preventing entry to the cantina, unless anyone is equipping Sith Armor:

Head east to the other end of Upper City South, and you can enter the clinic through an open doorway in the south wall. To the left of the entrance is Gurney, while directly ahead of you is a medical droid.

There's a locked door labelled Lab Personnel Only in the west wall, and Zelka Forn is to your right, standing between a desk in the middle of the room and the south wall:

You cannot ask these questions if you threaten him later, but he still heals you and shows you his inventory:

Rakghoul serum is only sold if it was delivered to Zelka, and the 20% discount only applies if you declined the reward or persuaded him to give extra. The Nerve Enhancement Package may be worth buying for any character with Implant Level 2 and using melee weapons, or lightsabers offensively, since it gives them Immunity: Mind-Affecting without sacrificing offense.

If you don't speak to Gurney after suggesting to Zelka that you might be able to get your hands on the rakghoul serum for him, he attracts your attention as you leave the clinic:

Rakghoul Serum can be found on the corpse of a Sith soldier to the south of the Outcast village gate in the Undercity. To minimize travel time, it's best to speak to Zelka on your first visit to the Upper City (you cannot sell it to Zax until Gurney has spoken to you after speaking to Zelka), then wait until you've completed the search for Bastila before returning.

You move closer to the light side of the Force by giving it to him:

You can move even closer to the light side of the Force by declining:

Zelka now sells items from his inventory at 20% discount, the value of which may exceed that of the reward, depending on cost and amount of what is bought. Alternatively, you can accept the reward or try to persuade him to give extra:

If you succeed in persuading him to give extra, you also get the same 20% discount as declining the reward; if you fail, you can still decline or accept it. Alternatively, you can threaten him to give extra, moving closer to the dark side of the Force:

You don't get the two Medpacs as well, which you could sell back to Zelka for 16 credits apiece. Regardless of how it ends with Zelka, the quest is completed.

How he and Gurney greet you now depends on whether you delivered the serum to him (without threats) or Zax:

If you fail or don't bother to persuade him, you can force the issue by opening the door in the west wall yourself:

Either way, Zelka's secret is revealed: 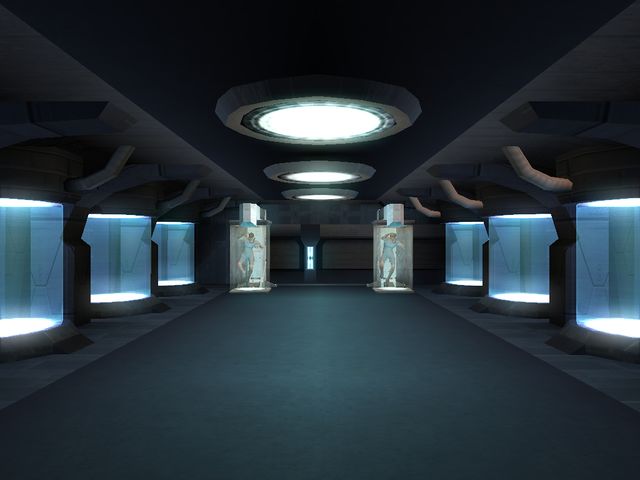 The door opens to reveal two injured Republic soldiers floating in kolto tanks. Neither is Bastila (or Trask).

You can blackmail him to move closer to the dark side of the Force. However, this could cost you at least 1000 credits if you haven't already spoken to him about Rakghoul Serum, since Gurney won't speak to you about delivering the serum to Zax.

If you leave them to it like this, the three of them walk off to the north, never to return. Otherwise, you have to intervene:

Both can be killed with a single Frag Grenade, even if their Reflex saves are successful... so it's not necessary. If you're playing without a party and you run away, Sith troopers may kill them for you (you will still receive experience, although it won't be recorded in Feedback); however, don't run too far away or when they die, the bullied merchant will run off without speaking to you.

If you have 100 credits, you can give them to him to pay off Davik and move closer to the light side of the Force:

However the dialog ends, the bullied merchant runs off to the north, never to return. Search the bounty hunter remains and you'll discover that even if you gave him credits, you receive at least as much as you lost: