You enter from the Lower City at the east end of the Pazaak room. Javyar's cantina has the same layout as the Upper City Cantina, with four rooms arranged around a central hub. The Bounty Office is to the south, the tap room is to the west and the music room is to the north.

The Pazaak room upon entry only has two people standing by the Pazaak table in the center of the room, and it isn't really worth speaking to either before buying a Pazaak deck from Garouk in the Upper City cantina. Gelrood, a human male Pazaak player, stands by its northwest corner:

Uriah, a Twi'lek selling Pazaak cards, stands by its northeast corner to the right of your entry. You can ask him some questions, although this isn't necessary:

When you reach the threshold of the west exit to the Pazaak room before completing the search for Bastila, you'll witness a brief altercation in the central hub just beyond, between Calo Nord to your left and three Black Vulkars (a Rodian and two Twi'leks) to your right:

Calo Nord throws a grenade, resulting in a blinding flash during which you hear blaster fire. When you can see again, the three Black Vulkars drop dead on the floor, and Calo Nord starts to walk to the exit. 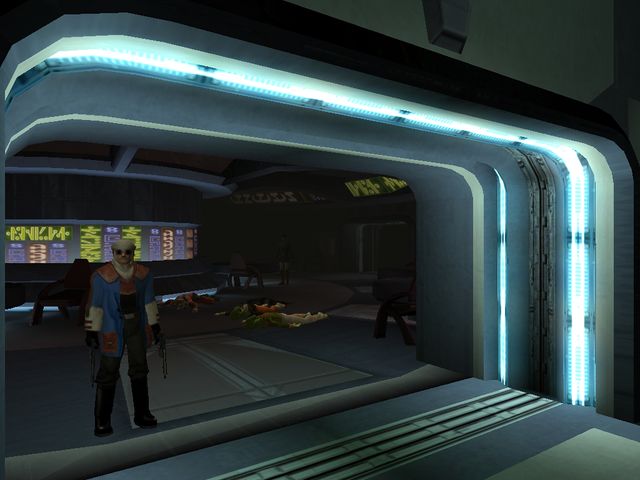 His name is Calo Nord. You can come after him if you want but it will be the last thing you ever do, he promises you that.

The Black Vulkars may leave remains which can be searched for random content, and you can try speaking to Calo Nord... although you've already seen how that plays out:

At this point, Calo Nord is invulnerable and has On Hit: Instant Death, DC 100, so you cannot possibly win. If you've been silly or inattentive enough to get this far without saving beforehand, you can still save yourself by saving, exiting and then loading the game you've just saved: Calo Nord should now have disappeared.

If you speak to any of the four Lower Taris citizens in the hub of the cantina:

The bounty office is off the central hub of the cantina to the south, and you can speak to all its inhabitants. There's a Rodian bounty hunter standing in the northwest corner by a table, and a Twi'lek bounty hunter on the other side of that table by the west wall:

Zax, the Hutt running the bounty office, sits at the back against the south wall:

If you're just looking for information, it'll cost you:

However, he'll tell you about the bounties for free:

You can consult your journal for more details on the bounties, or you can ask Zax:

If you ask about a bounty you've already collected:

Return to Zax to collect bounties:

The credits you receive for each bounty depend on how persuasive you can be:

You'll receive no credits if you fail to persuade him, threaten him and then select the following response:

If you're persuasive you can receive up to 2000 credits for collecting all the bounties (up to 1500 if you're not), although you'll receive less if you help some of the targets instead of killing them. You can move closer to the light or dark side of the Force, and there are opportunities to receive additional experience and credits, as well as items.

All targets can be found in the Upper City and Lower City apartments, but although you could complete them all before descending to the Undercity, it's advisable to wait until you've completed the search for Bastila, and complete them while escaping Taris (you can collect bounties before agreeing to go with Canderous Ordo to Davik's estate).

Dia can be found in her apartment in the south apartments, your neighbor to the west: if you haven't already met and killed her, you can return to hideout and transit back afterwards. You move closer to the dark side of the Force if you kill her (even more so if you threatened her first) but receive some experience for doing so. If you speak to Holdan about it in the music room to the north before getting paid by Zax:

Alternatively, if you speak to Holdan about it before killing her:

If you talk to Dia, you'll find Holdan was right about her not having the credits. If you speak to him again:

If you tell him again that you want the bounty on Dia's head removed, you can move closer to the light side of the Force by paying Holdan 200 credits to remove the bounty, or persuading him to do so (although this is hard, so completing the search for Bastila so she can use the Force is advised):

If you fail but Bastila is present, she brings the full force of her persuasive powers to bear:

If you follow Holdan to the Bounty Office and talk to Zax, you'll find that he does indeed stick to his end of the bargain:

Return to Dia to tell her the good news and complete the quest, receiving 125 XP in the process. You can move even closer to the light side of the Force by declining her reward, or you can accept it and receive an Energy Projector.

However it ends, if you speak to Holdan again afterwards:

Matrik can be found in his apartment in the east Lower City apartments, to the east of the entrance from the Lower City. You can kill him without moving closer to the dark side of the Force, receiving experience and a Mesh Underlay from his remains.

Alternatively, you can help him to fake his own death by buying him a permacrete detonator from the Equipment Emporium in the Upper City South for 50 credits, moving closer to the light side of the Force, receiving 480 XP and allowing you to collect his bounty anyway by lying to Zax:

Selven can be found in her apartment in the west Lower City apartments, to the northeast. This bounty is the most straightforward since there's no way to complete it except killing her, receiving experience and a Scope, Adrenaline Amplifier and Neural Band from her remains.

Largo can be found in his apartment in the north apartments, to the east of the entrance from the Upper City North. You can extort credits and kill him without moving closer to the dark side of the Force if you don't extort them from him during your first meeting and return to do so more than once (he will then attack you). You receive experience, 50 credits and an Energy Projector from his remains.

Alternatively, if you have at least 200 credits you can move (much) closer to the light side of the Force by giving them to him to pay Davik back, receiving 110 XP for this act of generosity but denying yourself the opportunity to collect his bounty:

Bendak Starkiller appears in the northeast corner of the Pazaak room of the Upper City cantina after you've entered the lobby of its duel ring to the south. However, you cannot kill him there, and to do so you need to enter the Duel Ring to become Taris Dueling Champion so that he'll come out of retirement to face you in an illegal death match. In the process of becoming champion you'll receive 520 XP and 1500 credits in total. You necessarily move closer to the dark side of the Force by stepping into the arena with him (despite the fact he does so not only voluntarily, but enthusiastically), receiving experience, Bendak's Blaster from Ajuur and at least 700 credits (900 if you're persuasive, or threaten him to move even closer to the dark side of the Force).

After speaking to Zelka Forn in the Upper City's Clinic about Rakghoul Serum and suggesting you might be able to get it, his assistant Gurney mentioned it might be more profitable to deliver it to Zax:

Rakghoul Serum can be found on the corpse of a Sith Soldier to the south of the Outcast village gate in the Undercity. To minimize travel time, it's best to speak to Zelka on your first visit to the Upper City (you cannot sell it to Zax until Gurney has spoken to you after speaking to Zelka), then wait until you've completed the search for Bastila before returning. You can try to persuade him to give more for it:

Otherwise, you can only make an empty threat about taking your business elsewhere or settle for 1000 credits:

You'll notice a Twi'lek male and female in the northeast corner of the bounty office, to the left of the entrance, who'll give you an opportunity to receive some easy experience. You don't need to speak to the male, Bib Surool, but if you do so:

You do need to speak to and persuade the female, Lyn Sekla, to become her partner for her audition, and receive experience if you can get her hired:

Asking how hard it can be always fails, otherwise you can alternate between the other two options until you succeed, since even with 8 Charisma and no skill points spent in Persuade you still have 40% chance to do so. However, save game before persuading her, as getting her hired depends on your Dexterity and how you choose to dance: you can succeed with as little as 8 Dexterity, even after failing the first two of the three dances, but you can also fail with higher Dexterity, even after succeeding with the first two dances.

It might not matter which of the three options you choose for the first and second dances, but choosing either of the first two options for the third and final dance can ensure Lyn's success:

However, you receive nothing if you don't dance well and fall over, or you ruin her audition by taking a dive:

The music room is off the central hub of the cantina to the north. Inside a trio of Bith musicians accompany two Twil'ek dancers performing on a stage at the back of the room, but trying to speak to any of them is no more productive than in the Upper City cantina:

[The musician is too busy playing to pay any attention to you.]

Their audience consists of two Black Vulkars seated to the right of the entrance, neither of whom will comment or engage in dialog, and Holdan, a human male standing to the left whose responses depend on whether your character is male or female:

If either Zax or Dia herself have told you about Dia's bounty:

The tap room or bar is off the central hub of the cantina to the west. As long as you don't already have Sith papers from Gadon Thek in the Hidden Bek base, Mission will appear outside the tap room to the left, while Zaalbar stands to the right by a table laden with food. As you approach either of them, two Rodians walk out of the tap room and confront Mission:

Mission and Zaalbar will now only remain until you leave the cantina or game (even if you save now, then exit and load the game you've just saved), so if you wish to speak to them once the two Rodians leave and receive a little experience for speaking to Mission, do so now. You can speak to Zaalbar as well, albeit very briefly (get used to this):

Mission is much more talkative, although if you're only interested in receiving experience you can end the dialog at any point and still receive it:

Inside the tap room itself an Aqualish, Bith, Black Vulkar and two Rodians are seated, but none of them will comment or engage in dialog. Only Ja'Gatcha, a two-headed alien standing by the bar in the southwest corner, will speak to you. You don't need to speak to them, but you can ask them about themselves and Taris: