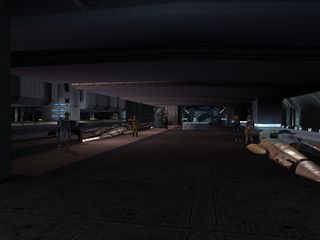 The view from the east end of the swoop platform. From left to right: the Ithorian mechanic; the Black Vulkars, Redros and Doba, by a swoop bike; Bastila caged and guarded; the Race Announcer behind a counter and before the sealed west door; and the Hidden Beks, Anglu and Phirk, by another swoop bike.

The mechanic, an Ithorian, speaks to you the moment you arrive at the swoop platform:

Once this dialog ends, you find yourself alone at the east end of the swoop platform, with the mechanic to your left in the southeast corner. There's a sealed door behind you, and another at the west end:

Return to speak to the mechanic if you need him to run over the basics of swoop racing again:

There are two Hidden Beks standing by a swoop bike to your right upon arrival, the Aqualish Phirk and their best rider Anglu, a Twi'lek female:

There are two Black Vulkars standing by a swoop bike to your left upon arrival, the Rodian Doba and their best rider Redros:

However, you can ignore both gangs and go to speak to the Race Announcer ahead of you to race. After each heat, the mechanic speaks to you again. If you fail to get the best time in your heats:

The race announcer is a Duros standing behind a counter in the center of the swoop platform. To the left as you approach is a cage containing the champion's prize – Bastila! However, you can only speak to her Vulkar guard, who reveals why she's unresponsive:

No one's allowed to talk to the prisoner. Brejik's orders. She wouldn't hear you anyway: she's got a neural disruptor collar on to keep her under control.

Speak to the race announcer to race:

So the time to beat is 0:38:43, but even if this is your first time swoop racing this shouldn't be at all difficult. It's best to just go straight, making no effort to avoid obstacles or fly over accelerator pads; as long as you accelerate from the start and switch gears when warned, you should beat this time very easily.

However, regardless of how fast your own time is, if you beat the previous best in one of your first two heats then the Mechanic informs you that it's been beaten by 0:00:25 (quarter of a second) afterwards. The next time you race, avoiding obstacles should be sufficient to beat the new time, but you can try maneuvering to fly over more accelerator pads as well just to see how fast you can go, if you want.

If you're unable to beat 0:38:43 in your first two heats, then beating it in any of your remaining three will win without having to race again. However, it's obviously quicker to finish the race in two heats.

Once again the Mechanic is the first to speak to you after the race:

The Race Announcer announces your victory as Brejik and two Vulkar guards arrive to present the prize:

Bastila has freed herself from the neural disruptor collar and cage, incapacitated her Vulkar guard and taken his Vibro Double-Blade. All but her and Brejik, his two Vulkar guards and Redros flee to the west end of the swoop platform.

Bastila is invulnerable at this point, so you can simply run back to the east end of the swoop platform and she'll kill Brejik and the remaining Vulkars; you'll still receive experience from those she kills, although this won't be recorded in Feedback. However, both Brejik and his Vulkar guards have Sneak Attack, adding 4-24 and 1-6 damage respectively to their attacks if they flank you or your back is turned: it's advisable to use an Energy Shield before retreating, particularly if saving levels.

Brejik has Damage Resistance: Resist 5/- vs. Slashing and vs. Bludgeoning, producing an effective barrier against melee attacks: using blaster pistols and rifles may be better, as may Grenades. Mines could also be set before your winning heat, although Bastila's invulnerability makes the use of explosives extravagant.

Now it's time to speak to Bastila for the first time:

You return from the swoop platform to your hideout, where you have another dream or vision of the female Jedi, who you now recognize as Bastila. After fighting and defeating the dark Jedi on what can now be seen to be the bridge of a ship, she's joined by three other Jedi as she confronts a hooded and cloaked figure who's just killed a Republic soldier.

Before they can engage in battle, the ship is fired upon by another and all are knocked to the ground. Bastila recovers, and looks over the still prone form of Revan...

Carth is happy to see both of you return:

Bastila speaks to you before you can do as she suggested, and exit to the South Apartments to start asking around in the cantinas for help escaping Taris. Upon exiting after speaking, a green Twi'lek male comes running from the east to speak to you:

Droids by Janice is in the southwest corner of the Upper City North, where you can now buy T3-M4:

Alternatively, If you're desperate or willing to move closer to the dark side of the Force, you can threaten her to get T3-M4 for free:

Now that T3-M4 has joined your party, you can use him to gain access to the Sith Base to the north: once its door is open, T3-M4 can be removed from your party, although skill with Computer Use may be useful with the Reception Terminal just inside the base. Once you've entered you'll be unable to return to hideout or change your party selection without leaving the base, so do so from here if need be.