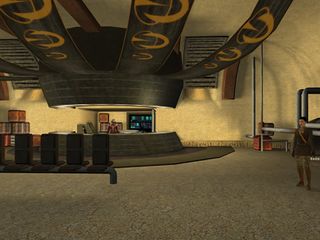 The view from the door of the Czerka office: the protocol officer stands at its north end, while the Rodian Greeta Holda mans the kiosk by the west wall.

The door exiting to Anchorhead is behind you in the east wall, in the northeast corner of the Czerka office.

Upon entering for the first time, you witness the end of an altercation between the Duros conservationist Dayso Cooh and the Czerka protocol officer:

He exits, but remains outside, while the protocol officer remains at the north end of the office:

You need to ask about hunting licenses:

You have to agree:

This signifies that the bearer may exit Anchorhead to hunt out on the deserts of Tatooine, having acknowledged that Czerka Corporation bears no responsibility for any harm that may come to them.

You can now enter the Dune Sea via the gate at the east end of Anchorhead.

Upon exiting the office, the Duros conservationist Dayso Cooh approachs you and tells you what's going on:

The following responses end the dialog most quickly:

Otherwise, you can ask him more about his nonviolent solution:

Such a droid is for sale in the droid shop on the north side of the square at the east end of Anchorhead.

You can return to the protocol officer to ask about your agreement and, after purchasing HK-47 and using him to make an agreement with the Sand People chieftain, suggest there may be a nonviolent solution:

Neither solution affects your alignment, and most experience is received by making peace with the purchase of HK-47 (250 XP) and later moisture vaporators (400 XP) from Greeta Holda, then breaking it once you've completed the Desert Hunt in the Eastern Dune Sea to prove yourself worthy of their history (250 XP), allowing you to kill the Storyteller instead of a Sand People guard (400 more XP at experience level < 12): that's up to 1300 more XP in total. However, this has a high price: it costs 2500-5000 credits to purchase HK-47 and 200-400 credits to purchase moisture vaporators.

Once you have any Gaffi Sticks to redeem for bounties:

Redeeming these bounties can be quite lucrative:

* A Sand People guard can be killed in their territory or the enclave, or neither once you've given the moisture vaporators to their chieftain, and there will be four fewer Sand People Warriors in the enclave if Mission's brother Griff doesn't appear there.

Once you have the chieftain's gaffi stick by fair means or foul, you can redeem the bounty to complete this quest:

She can be persuaded to give more if you're skillful enough or you can dominate minds:

Otherwise, if persuasion fails then a threat is never successful and you have to settle for less:

You can ask her about Czerka Corporation, although you may need to be persuasive to get answers:

You can also ask about anything out of the ordinary happening:

The Rodian Greeta Holda mans the kiosk by the west wall opposite the door:

He can be persuaded to lower the price:

These devices use a pair of vaporators to condense moisture from the air, albeit in small amounts over a long period of time. Droughts can last for centuries on some desert worlds, so this may be the only means to obtain water.

Exit and return to the docking bay before transiting back to the entrance to the Sand People enclave.

You can ask about bounties and Czerka Corporation:

You can also ask about anything out of the ordinary happening:

The protocol officer knows something about Mission's brother:

However, she can always be persuaded to tell using your skill or the Force, so save your credits:

Griff now appears in an enclosure on the east side of the Sand People enclave. If you speak to Mission before setting him free:

Once he's free and he and Mission have been reunited, he appears in the northwest corner of the office:

If you speak to Mission before bringing him a tach gland:

Otherwise, you can make her angry at her brother:

In either case she repeats the last line if you try to talk to her about your brother again.

The only place to find tach is on Kashyyyk. Go to the Czerka Hunting Ground in the Upper Shadowlands and speak to Commander Dern to express interest in some work to harvest tach, or simply unlock the center metal box on the southwest side of the Czerka camp and take the three tach glands within, before returning:

However, you gain nothing from giving him these credits, so you should not do so:

If you haven't made Mission angry at her brother and you speak to her again:

However, after exiting and returning, Griff is nowhere to be seen and Greeta Holda has a message for you:

This completes the quest, but if you haven't made Mission angry at her brother and you speak to her again: