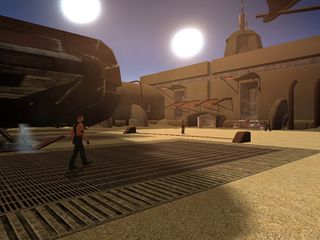 Upon exiting the Ebon Hawk for the first time, a customs officer approaches and speaks to you about a docking fee:

[You have no choice but to return to your ship.]

You can simply pay:

Otherwise, it's easy to persuade him to waive the fee using your own skill or the Force:

The following responses now or in the future will end the dialog:

You can continue the dialog to ask questions about Tatooine. Otherwise, he remains standing to the right of the Ebon Hawk's boarding ramp so you can stop and resume at any time:

It's easy to persuade him to tell you about Czerka Corporation using skill or the Force:

You can also ask about job opportunities on a number of occasions, and about the Star Map, either obliquely or directly:

As you approach the exit to Anchorhead is in the south wall in the southeast corner of the docking bay, you may encounter a messenger for a party member if unlocked by dialog:

The docking bay mechanic stands to the left:

Jor Ul Kurax, an Aqualish dockworker, stands to the right of the exit, and speaks to you as you approach:

A two-headed alien merchant called Mic'Tunan'Jus Orgu has set up shop in the shade of the south wall of the docking bay, to the right of the exit. If you saw Ja'Gatcha in the tap room of Javyar's cantina on Taris you may recognize the type, and if you spoke to them you'll already be able to identify them as Paaerduag from Sorjus:

You can also ask questions about themselves, Tatooine and any off-world rumors: