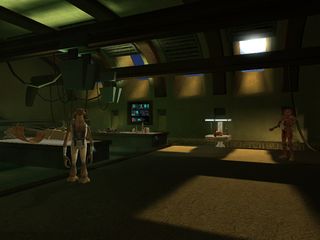 Upon entering the droid shop, you see its Ithorian proprietor, Yuka Laka, on your left and the HK-47 droid in the far corner on your right.

The door exiting to the east end of Anchorhead is behind you in the east wall, in the northeast corner. In the southwest corner opposite is a defense turret, while an inoperative droid and a utility droid stand by the south wall, to the left and right respectively:

The shop's proprietor, an Ithorian named Yuka Laka, stands by the northeast corner of the workbench in the middle of the shop. You can speak to him about his HK-47 droid, the Star Map and what he has in stock:

HK-47 joins your party once purchased, but this is only necessary for a peaceful solution to the Sand People raids (ironic, given its nature). You may want to speak to the droid itself before you ask Yuka Laka more about it and negotiate its purchase. HK-47 stands in the northwest corner, and it's much more communicative than the two other droids:

If you haven't already done so, you can return to Yuka Laka and ask him a few questions about HK-47:

You can lower the price even further to 3,000 or even 2,500 credits depending on how persuasive you can be using your own skill or the Force:

Alternatively, threatening him will lower the price to the minimum 2,500 credits and move you closer to the dark side of the Force. However, you won't be able to purchase anything else from him once you've done so:

If you threatened him, Yuka Laka refuses to deal with you ever again:

HK-47 can now join your party after speaking to him:

As long as you haven't threatened him, Yuka Laka is happy to deal with you again... even if HK-47 threatens him instead: