After completing your Jedi Trials and being ordered by Master Vandar Tokare of the Jedi Council to investigate some strange Ruins on Dantooine, Ahlan Matale bursts into the Council chambers to speak with them before you can leave:

If you decide to complete this quest then you need to do so before acquiring a fourth Star Map, although a light side character who wants to complete the Genoharadan quests later should wait until after completing them. If you speak to Master Vandar again before completing your investigation of the ruins:

You can also speak to Master Vrook Lamar about it after completing your investigation of the ruins and reporting to Master Vandar:

This quest is optional even in the context of the Sandral-Matale feud, but you receive experience and credits for completing it, and can move closer to the light or dark side of the Force.

In the middle of the plain at the east end of the Matale Grounds, three kath hounds are now gathered by a dead settler:

This is the diary of Casus Sandral, amateur archeologist. It details his efforts to discover the source of the ancient ruins found across the surface of Dantooine. Upon reading it, you gather that he had found some correlation between the ruins and something called the 'Rak'.

The Matale estate is in the center of the Matale grounds, and you can now tell the Matale droid guarding its west door that you wish to speak to Ahlan Matale:

Leave the Matale grounds via either path south and travel across the Grove to the Sandral Grounds beyond: the Sandral estate is in the midst of the plain at the west end. You can now enter after speaking to the Sandral droid guarding its north door:

Otherwise, if you found the Dead Settler at the east end of the Matale grounds:

If you don't tell him his son Casus is dead, then after speaking to his daughter Rahasia you can tell his droid:

As Nurik Sandral exits the main hall via the door in the middle of its south wall, his daughter Rahasia Sandral enters:

If you continue speaking to her, or do so after apologizing:

If you speak to her again, she repeats most of the following:

This key opens the rear door to the Sandral Estate.

The Sandral droid now stands to the left of the door in the middle of the south wall of the main hall:

[Non-family members are not permitted entrance.]

Exit via the door in the north wall behind you, then use Rahasia's key to open the rear entrance to the Sandral estate in its east wall. The only enemies within the estate are Droids armed with Blaster Pistols and Blaster Rifles, and a couple of minor Mines.

Through the rear entrance is the east arm of the hallway around the north and east perimeter of the estate. There's a Sandral sentry droid at the south end of the hallway:

There are three doors in the west wall opposite, and the center one is mined and locked:

There's a footlocker at the foot of the bed by the west wall in the room beyond:

There a locked footlocker at the foot of the bed by the west wall in the room beyond the north door:

The door to Shen's holding cell in the south wall of the north hallway is mined and locked:

The door can also be opened with a prison key received from a footlocker in the Repair Room to the southwest. Inside is Shen Matale:

You left Rahasia back in the main hall, and you can return to her there (although you'll need to return east to exit the estate, then enter again to the north). She can also be found in her room at the north end of the South Hallway, the most direct route to which is through the Storage Room at the west end of the north hallway. In either case:

Before returning to the holding cell to speak to Shen again, you may want to explore the rest of the estate as you'll be locked out again once you and he Exit.

Beyond the door labeled Security Room at the south end of the North Hallway is a room containing three Sandral war droids, with a footlocker to the left of a computer panel by the west wall:

You can use the computer panel to view camera feed of the North Hallway, South Hallway, this Security Computer Room, Central Security Room, Storage Room and Repair Room instead of downloading an area schematic. You can also corrupt patrol droid targeting programs in all but this room, and overload computer power conduits in all but the north and south hallways to kill Sandral war droids (and your party in this room, unless one of you uses an Electrical Capacitance Shield for Damage Immunity: 100% vs. Electrical): although you receive experience for droids killed as a result, none is received for Computer Use and the droids aren't nearly dangerous enough to justify the use of so many Computer Spikes.

Beyond the door labeled Security Room at the south end of the room is the east end of the South Hallway.

Beyond the door labeled Security Room at the west end of the North Hallway is a room containing two Sandral war droids, with two footlockers by the south wall in its southwest corner:

The central security room contains three Sandral war droids like those in the Storage Room beyond the door in its west wall, to the left of which is a large locker, with two footlockers by the east wall in the southeast corner:

Beyond the other door labeled Security Control Room in the south wall is a short hallway ending in another door, beyond which is the south hallway.

The hallway around the west and south perimeter of the estate can be accessed by going through the Storage Room to the northwest, the Central Security Room to the south and the Security Computer Room to the southeast. Rahasia can be found next door to the storage room at the north end, with a footlocker at the foot of her bed by the east wall:

There's another Sandral sentry droid at the east end of the hallway, standing outside the security computer room:

The repair room in the southwest corner of the estate contains two Sandral war droids like those in the Security Computer Room, with a footlocker by the east wall in its southeast corner:

This key opens the holding cell in the Sandral Estate.

There's also a faulty war droid to the left of the west door:

The droid exits via the west door, goes north up the hallway then east through the Storage Room into the Central Security Room, before returning to the hallway to the south and turning west: however, it turns and retraces its steps rather than returning to the repair room or going around the corner to the north again.

Upon returning to the Holding Cell to speak to Shen again after speaking to Rahasia, you and he exit the estate to the north to meet her outside: regardless of the outcome, you're now locked out of the estate again.

You're ambushed by Ahlan Matale, and Nurik Sandral shows up shortly thereafter. Both are flanked by a war droid to either side...

To receive maximum experience (but only half maximum credits, 500 less), you need to be highly persuasive to convince both fathers to allow Shen and Rahasia to stay together:

If you return to the Matale Estate, or the Jedi Council Chambers in the enclave:

If you start with a more neutral response, subsequently choose different responses or fail to persuade both fathers, then you have two remaining options: the first is for Shen and Rahasia to stay together without reconciling with their families, for which you only receive two thirds maximum experience (300 XP less) and no credits.

If you return to the Matale Estate or the Jedi Enclave:

The second option is for Shen and Rahasia to separate, for which you only receive half maximum experience (450 XP) but maximum credits:

If you return to the Matale Estate, or the Jedi Council Chambers in the enclave:

You can also move closer to the dark side of the force while separating Shen and Rahasia if this is your first response:

If your third response isn't to lie to Nurik, you can move still closer to the dark side while receiving maximum credits by lying to Shen (regardless of success or failure):

Failure either time you try to persuade him gives you a second opportunity to lie to him and move even closer to the dark side:

Otherwise, you can move much closer to the dark side, receiving two thirds maximum experience (300 XP less) but no credits, by lying to Nurik to provoke a bloodbath with your third response:

Now that Nurik Sandral has killed Shen Matale, a bloodbath is inevitable:

HK-47 would be proud (and no doubt disappointed to miss it, so maybe you should wait before speaking to Shen again and return after the droid has joined your party on Tatooine...). 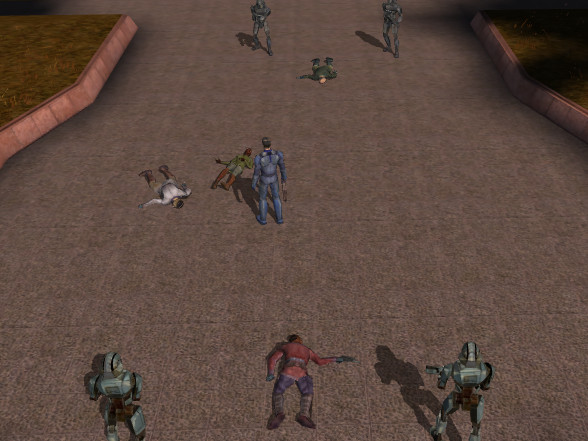 With Canderous in your party, you won't have to lie to the Jedi Council: perhaps it really was Mandalorian raiders...

With both families killed, their war droids now attack you with Blaster Carbines or a Blaster Rifle:

If you return to the Jedi enclave and speak to Belaya in its inner courtyard, or Crattis Yurkal in the Aratech Mercantile store:

If you return to the Jedi Council chambers, you can move even closer to the dark side by lying to them all: