The entrance from the Dune Sea is in the northwest corner of Sand People territory, and it's mined:

The Sand People Enclave is to the south, and Czerka marker posts are dotted along the remaining boundaries:

If you try to cross these boundaries:

If your party doesn't have Zaalbar or any meatbag organic member who isn't wearing Sand People Clothing then the only threats as you travel south towards the enclave are mines. Otherwise, you're likely to encounter several Sand People ambushes:

Each ambush consists of three Elite Warriors, two melee and one ranged:

The southern part of the territory may be heavily mined, but the herd of three Bantha roaming the area won't trigger them: it's advisable to have at least one party member with Awareness rank 10 to detect them. 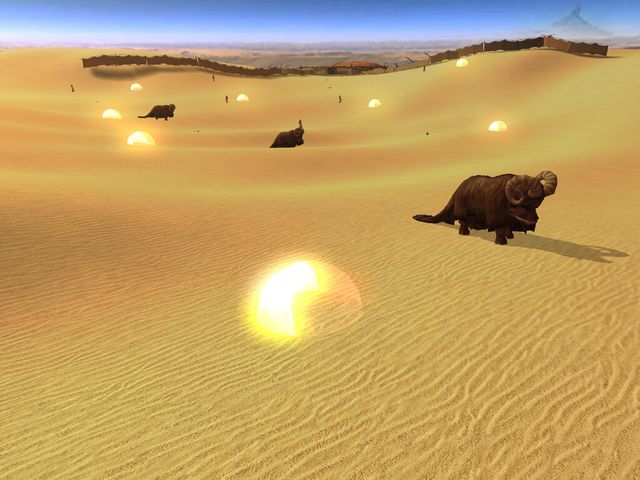 The location of all mines on the approach to the Sand People enclave, as seen from the northwest.

A line of three mines stretches to the southeast from the probable location of the first ambush:

As you continue south towards a corpse, there's another mine to the west:

An arc of four mines covers the approach to the enclave:

Once you're beyond the mines, stop to the north of a corpse with random contents, remove Zaalbar and any meatbag organic member of your party not wearing Sand People clothing, make sure HK-47 is added for a nonviolent solution to the Sand People problem, and save game.

The enclave's last line of defense is a battery of four Sand People turrets to either side of its entrance: these are all invulnerable to damage with Awareness rank 60 and On Hit: Instant Death, which has DC 100. Even though the latter doesn't appear to affect droids like HK-47 or T3-M4, it's possible for a Jedi to have Blaster Bolt Deflection > 38 to ensure they never get hit even in close proximity, and the Stun Droid Force powers can stun (but not damage) all the turrets, the moment any member of your party crosses the threshold once you've been detected:

Your entire party has been
killed.
Return to main menu.

Otherwise, you should be able to approach and open the wood slat door to enter the Sand People Enclave: once inside, you cannot return to Ebon Hawk or change party selection. If HK-47 isn't in your party when you do so, you have one chance to exit again without the enclave becoming hostile: otherwise, the Sand People chieftain must be killed before it will be safe to exit again without your entire party being killed.

The exit to the Eastern Dune Sea is in the northeast corner of the territory, and it's also mined:

However, if you try to use it:

Before you can enter you need to receive a map of the Eastern Dune Sea from the Sand People chieftain in their enclave or the Jawa chieftain Iziz inside the gate of Anchorhead, both of which require you to enter their enclave.

There's a Twi'lek corpse at the summit of a dune to the southwest of the exit, close to the center of the territory:

Once you've proven yourself worthy of the Genoharadan by completing a mission, Vorn's assault droid and swoop bike can be found to the northeast, close to and visible from the exit to the Eastern Dune Sea.

This first incarnation is immobile, so it's immune to Force Whirlwind. It deactivates once reduced to 40 Vitality, allowing it to be reprogrammed:

[The droid is actively engaged in its patrol route. You cannot reprogram it anymore.]

Follow the droid to the west, and Vorn can now be found camped by the exit to the Dune Sea next to the remains of a Krayt Dragon (which resist 5 damage and have 15 Vitality):

The droid also deactivates if you run or sneak past it to the swoop bike, and at character level < 18 more experience is received for using the bike and subsequently killing the droid than reprogramming it to seek out and attack Vorn Daasraad (350 vs 360 XP at level 18):

After your party hides behind a wrecked speeder to the north, Vorn appears from the west, reactivates or reprograms his droid and discovers the mine:

He always starts by using his Energy Shield. His assault droid is weaker than when first encountered, even if it hasn't already been engaged in combat, and Vorn's reprogramming undoes yours:

There is a message on this datapad, though it is unclear if Vorn meant to send it to someone, or if someone sent it to him.

The guild is restless. Genoharadan agents are hunting. Soon they will come for me - and possibly for you.
When they do, I plan to be ready.

Return to Hulas in Ahto City's East Central courtyard on Manaan to collect his bounty.