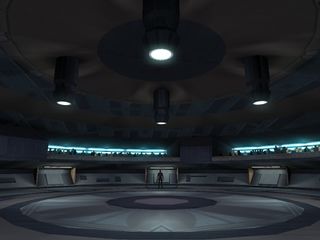 The duel ring is a large circular room with nowhere to hide from your opponent.

After speaking to Ajuur, the Duel Organizer in the lobby on the south side of the Upper City cantina, and telling him you'll step into the duel ring:

The duel ring is to the southeast of the Upper City cantina; when you duel, any party remains in the lobby.

The arena door in the north wall of the dueling arena cannot be opened once a duel has begun: you have no choice but to fight until one of you drops. Regardless of the outcome, after each duel you return to the lobby. There's no need to heal if you duel again, since you always begin each duel fully healed. You can speak to Ajuur again:

The rewards for winning each duel are as follows:

Although the Upper City Cantina may be the third area you visit after leaving your Hideout, and you may be able to win the first couple of duels even if you're still level 2 and playing on Difficult, it's better to return after completing the search for Bastila and meeting Canderous Ordo here about escaping Taris. Exploring Taris up to that point allows you to get many items that make later duels more manageable, particularly if you're saving levels:

If you pause game the second the duel announcer finishes and you enter the arena, combat mode won't have engaged yet and you can use your Energy Shield and as many Stimulants as you deem necessary (unfortunately they always expire after a duel). Otherwise, you can only use one item in each combat round (remember to do so using the Inventory menu rather than wasting a round using the action menu).

You may have low chance to hit your opponent, particularly if your character isn't combat-oriented or you're saving levels, or both. If this is the case, ranged weapons are advised since a future Jedi Consular or other Force user may have neglected Strength entirely while having moderate to high Dexterity as a secondary attribute.

If you move close enough to your opponent, the Close Proximity Ranged Bonus adds 10 to your Attack roll (check Feedback to confirm that you're close enough). Of course, the same bonus applies to a ranged opponent, or a melee opponent receives a melee on ranged bonus adding 10 to their attack roll. It's possible to be close enough to receive the bonus without prompting a ranged opponent to draw a melee weapon, and you can use Energy Shields to absorb blaster fire.

Your chance to hit your opponent can also be improved by debilitating them with a Concussion Grenade. All duelists are Soldiers, which means their Will save is their lowest:

If their Will saves fail, they're debilitated for 9 seconds or 3 rounds, during which time a debilitated penalty of -4 is included in Defense, and Dexterity modifier is excluded:

If you're a Scoundrel, this is a perfect opportunity for Sneak Attacks. Once debilitated, Dexterity modifier is also excluded from their Reflex saves:

If you're too fragile for melee combat, you can maintain distance by running around the arena perimeter: every quarter revolution, pause game and fire, then resume running before repeating. You should avoid using Power Blasts or Sniper Shots as their longer animation outside the framework of combat rounds gives your opponent much more time to close, but otherwise you should be able to maintain distance without needing the 20% speed bonus of an Adrenal Alacrity stimulant (although +4 Dexterity adds 2 to your attack roll).

If you have the Demolitions skill, setting recovered or store-bought Mines is another option against melee opponents, although only Marl is exclusively melee (all the others have ranged options, which they'll use in preference to chasing you when you're too far away). Rank 14 is required to be absolutely certain of setting Minor mines in combat, and those set in earlier duels will remain there for later ones, allowing you to prepare for Marl if you want.

Duncan really lives to his reputation. Even at level 2 on Difficult, you shouldn't lose to him unless you're actually trying to throw the match (maybe because you feel sorry for him?). If you do lose:

If When you win:

Always speak to Ajuur to receive your percentage of the purse. It's your turn to gloat, should you feel like it:

Speaking to other duelists and duel spectators will put it in perspective, though:

He's more damaging in melee combat, so maintaining distance is advised unless melee combat plays to your strengths as well. However, he shouldn't be difficult to beat even if saving levels on Difficult.

If you speak to Gerlon Two-Fingers or the duel spectators afterwards:

Her ranged and melee abilities are fairly balanced, so play to your own strengths. However, if you remain at range then this may be the first duel where using an Energy Shield is advisable, particularly if saving levels or playing on Difficult.

If you speak to Ice, other duelists or duel spectators afterwards:

Marl is an exclusively melee fighter who attacks twice in each combat round. However, although he can hit hard he isn't particularly accurate: if you decide to go toe-to-toe with him equipping a melee weapon of your own, a Republic Mod Armor with Armor Reinforcement (found in the supplies of the Vulkar Gang Boss in the west Lower City apartments), > 13 Dexterity and an Adrenal Alacrity stimulant give you 20 Defense, enough to give Marl just 35% chance to hit with his first attack (20% if he uses Power Attack) and only 5% chance with his second.

The same armor with Mesh Underlay has Immunity: Mind-Affecting, eliminating the threat of being debilitated if he uses Master Critical Strike. This also allows you to try to debilitate him, since a Concussion Grenade thrown at point-blank range won't affect you. Alternatively, if you're too fragile to risk being in melee range, you can run and gun.

If you speak to Marl, Gerlon Two-Fingers or duel spectators afterwards:

Twitch favors two Heavy Blasters and he can use Rapid Shot, so closing to melee range and obliging him to draw his Vibroblade is recommended. However, if you're saving levels or have low chance to hit, you may prefer to maintain distance, using Energy Shields to negate his blaster damage and Grenades to inflict it: save any Plasma Grenades for Bendak, and start with Sonic Grenades since they're just as damaging as Frag Grenades but may also apply -6 Dexterity for 30 seconds, resulting in -3 to his ranged attack rolls, defense and Reflex saves each time his Will save fails. 5-9 Sonic or Frag Grenades (6 on average) should do the job.

Speak to Ajuur once again to receive your percentage of the purse:

If you speak to Twitch, Deadeye Duncan or duel spectators afterwards:

Once you've become Taris Dueling Champion, you can go to Bendak in the northeast corner of the Upper City cantina's Pazaak room and agree to meet him in a deathmatch, giving you an opportunity to kill him and then collect the bounty from Zax in Javyar's cantina in the Lower City.

To save time, you should follow him out of the cantina and then return, before speaking to Ajuur, the remaining duelists or duel spectators:

Speaking to Ajuur after returning to the cantina, you're not committed to the death match until you tell him you're ready:

The first thing Bendak does is throw his Plasma Grenades. He'll stop once you're in melee range, but if you're too fragile to go toe-to-toe with him then keep moving around the arena until he's thrown all three.

Although, like Twitch, Bendak's ranged attacks look stronger, on balance it's probably better to keep your distance, using Energy Shields to negate his blaster damage and Grenades to inflict it. Don't worry too much about trying to conserve them for later: once you've become a Jedi on Dantooine, you or any other Jedi in your party can select Energy Resistance, and Improved Energy Resistance at level 9, to replace shields, and other Force powers replace grenades as the Saves of your enemies increase to the point where they rarely, if ever, fail to save against them.

Don't bother trying to pause game and use anything before combat mode engages: instead, throw a grenade, then move, pause, throw another and repeat until Bendak has thrown all three of his: this allows you to damage him for three rounds without taking damage yourself, sparing your shields.

However, Bendak's Mandalorian Armor has Damage Resistance: Resist 25/- vs. Sonic, so Sonic Grenades won't damage him and a Concussion Grenade has the same 40% chance to reduce his Reflex save against Frag or Plasma Grenades, but by -4 rather than -3 (although multiple Sonic Grenades may stack). You could have 8 Plasma Grenades of your own, and on average 6-7 will do the job (you may want to start with a Poison Grenade for 4 damage every 3 seconds for 30 seconds, or 40 damage over 10 combat rounds, although there's still 40% chance that Bendak will save and no damage will be applied at all).

Speak to Ajuur to receive your percentage of the purse:

Otherwise, more credits are received if you're persuasive, or you're willing to move closer to the dark side of the Force:

If you speak to him, the remaining duelists or duel spectators afterwards:

Now all that remains is to go to Zax in the Bounty Office of Javyar's cantina in the Lower City to collect Bendak's bounty...