After opening the Upper City elevator to access the Lower City, an Ithorian and a taunting boy and girl spawn here. As you approach them, the Ithorian speaks to you, giving you a chance to receive a small amount of experience and move closer to the light side of the Force:

The Ithorian is saved if you get involved, or Mission, Bastila or Carth do so if you don't:

Otherwise, you can move closer to the light side of the Force at the cost of a Medpac:

If no one gets involved, the boy kills the Ithorian before running away:

Once you have Sith Armor from the North Apartments, travel to the west end of the Upper City North and turn north at the T-junction (being sure to use the south side of the walkway if you wish to avoid the drunk men on the north side). As you turn right around a hairpin bend, at its apex you'll see the elevator leading down to the Lower City in the east wall, with a Sith Guard to the right. If you try to approach it or speak to him:

The elevator remains locked until someone equips Sith Armor and you approach or speak to the Sith guard again:

Sith Armor needs to remain equipped until you've taken the elevator to the Lower City. Aside from allowing access to the Lower City, opening the elevator door also spawns the Ithorian being taunted by a boy and a girl at the entrance to the North Apartments. After trading the Sith Armor for papers with Gadon Thek below, those need to be presented instead:

Droids by Janice is also at the west end of the Upper City North (be sure to use the south side of the walkway from the east end if you wish to avoid the drunk men on the north side). Turn south at the T-junction and open the door labeled Droid Shop to enter. Three incomplete droids are in bays in the south wall, while Janice Nall, a female Twi'lek, stands in a kiosk in the west wall with two utility droids to the left.

There's no need to come here until you've completed the search for Bastila, but buying T3-H8 gives you a chance to receive some experience, and perhaps receive a few more credits and move closer to the dark side of the Force:

You can also ask her to let you see what she's got for sale, in her inventory:

You can ask her some questions about Taris as well, although this isn't necessary:

As T3-H8 crosses the threshold of the shop as you leave, it explodes. Naturally, you return to Janice to get a refund:

She can be persuaded to give something extra, although if you fail then you can move closer to the dark side of the Force by threatening her instead:

When traveling between the east and west ends of the Upper City North, you'll notice a multicultural trio of drunk men on the north side of the walkway. You can use the south side of the walkway to avoid them, but approaching them gives you a chance to move closer to the light or dark side of the Force (and in the latter case receive a small number of credits), unless someone is equipping Sith Armor:

They all wander to the east and stop at the junction. If you speak to them again:

Any nearby Sith Troopers may fire upon them, and you'll still receive experience if any drunk man is killed as a result (although this won't be recorded in Feedback).

Gorton Colu stands at the northwest corner of the T-junction at the west end of the Upper City North, with an audience of a couple of Taris citizens:

You can ignore him, although if you want to find out what he's talking about then it can get particularly heated if Zaalbar and Mission are present:

The entrance to the Sith base is to the north of the Upper City elevator, but there's no reason to go there until you've completed the search for Bastila and you're escaping Taris. 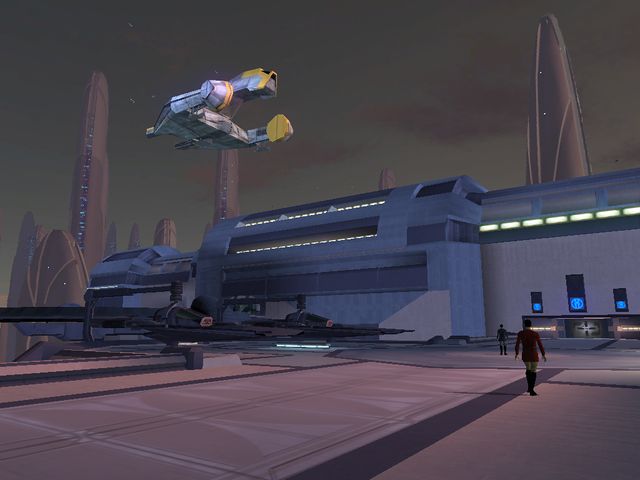 A ship takes off from the landing pad to the left of the Sith Base entrance.

If you try to open or use the door, you're informed of the following:

[This security door is sealed and cannot be opened using normal security skills.]