There is a crack in the dimension in Ludibrium. Let's investigate it!

To enter the PQ, you must use the Dimensional Mirror to enter Spiegelmann's Guest Home. You will find the PQ NPC here; a red stop-sign. You need a party of 3 to 6 to enter the PQ. However, this PQ can be soloed in case of disconnections because you can get Platform Puppet from Sgt. Anderson in the 5th stage (don't exit though!), and each puppet put on a platform represent 1 person. 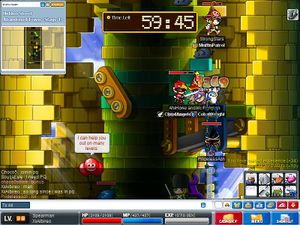 The First stage of Ludibrium PQ.

Kill, kill, and more kill. The monsters are spread all around the map, from the bottom to top. All the Ratz must be killed, and the party has to collect the passes they drop. Once all the monsters have been killed, enter the portal near the Red Balloon to advance to the next stage. 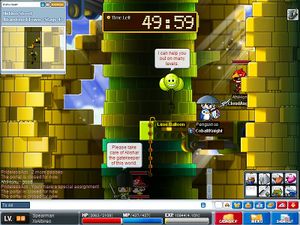 The second stage of Ludibrium PQ.

In Stage 4 there are 5 different rooms. Every room contains 3 shadow monsters, except room 4 which has 2. Rooms 1-3 feature Shadow Eye from Another Dimension. Rooms 4 and 5 feature Dark Eye from Another Dimension. Pick your door and tell PQ members you are already in the door so they don't come in yours. Another way instead of telling PQ members is to drop 10 mesos in front of the door to tell them there is already someone in the selected door. The rooms are completely dark, and only the enemies' eyes are visible. Once all the monsters are killed, enter the portal near the Lime Balloons to continue. 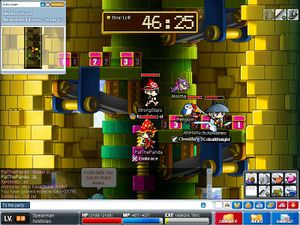 The third stage of Ludibrium PQ.

Kill all 4 Rombots within the map. Two are found on the bottom and two are on the top. After killing them all, talk to the Sky-Blue Balloon to continue. 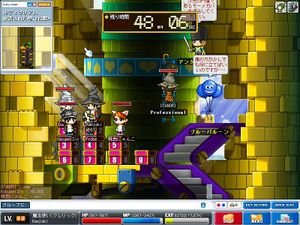 Enemies
None
Etc.
Numbered Boxes
Completion
Standing on correct answer of the question

The leader must click on the balloon to start. The balloon will give your party a math problem, and 3 people have to stand on the numbers in the answer (i.e. if the answer to the math problem is 325, 3 people have to stand on the numbers 3, 2, and 5.) If your party does not have 3 people, you may talk to Sgt. Anderson for a Platform Puppet which can be used in place of a person.

This is the final stage of the PQ. Alishar will spawn. Based on his health, the boss will spawn different types of Chronos. Near 75% HP he will spawn regular Chronos, at 50% HP he will spawn either Chronos or Platoon Chronos, and at 25% HP he will spawn Master Chronos along with Platoon and regular Chronos. While fighting the boss, characters may be afflicted with Seal (locks your skills) and Blind (reduces your accuracy). Everyone will need either Eyedrops and Holy Water or only All-Cure potions. Mages don't have to worry about losing accuracy so they only need Holy Water, though All-Cure potions work as well. When he dies, talk to the Purple Balloons to exit.

When you're ready to leave, click the NPC and he will escort you out.

For every 5 PQs completed, you can go and talk to the Red Sign and receive a pair of Broken Glasses. The stats can vary (base of 1 to all stats) and they come with 3 slots. They are untradeable unless paired with Scissors of Karma.

If you are 20 or more levels below the average party level, EXP reward is reduced by 80%.

Note: The monster stats will vary based on the average level of the party.