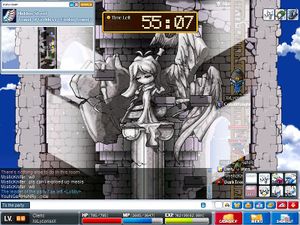 Orbis PQ Tower's Goddess, which is to be restored.

Remnant of the Goddess (also known as Tower of Goddess or Orbis Party Quest) is a Cross World Party Quest based on Orbis / Orbis Tower. It can be completed by four players from levels 70 and above.

To enter the Party Quest, one must enter the Cross World Party Quest portal at Spiegelmann's Guest House while this Party Quest is part of the current rotation. The rotation also consists of Moon Bunny's Rice Cake, First Time Together, Forest of Poison Haze, and Ariant Coliseum. 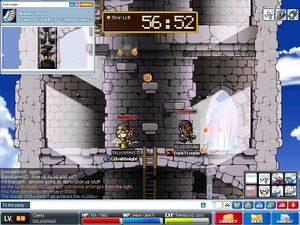 This room is the center of the Goddess's Tower. The statue is located here, missing many pieces. There is a portal leading to the lobby stage here at the bottom right. Once the leader enters the stages, monsters that resemble Jr. Boogie, but are much tougher and capable of flying, run about the room. These do NOT have to be killed, but always present an annoyance when navigating the tower. 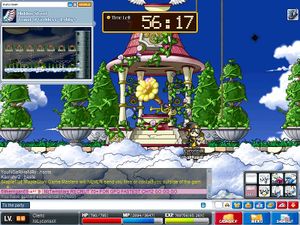 Orbis PQ Lobby, outside the tower. This is the Record Player.

Climb the steps to reach the upper platforms. It features many of the aspects of ordinary jump quests. Spears will emerge from the platforms, and throwing stars sweep back and forth. Once at the top, click on the boxes to obtain the record disc. Upon finding the correct disc for the day(arrangement of discs in boxes is random for each PQ), drop the disc in front of the Record Player at the middle of the map. Do not drop a different disc while the correct one is playing. There is no backup, unless you smuggled one in, and you will have to restart the PQ.

For this stage, instead of killing all monsters, you must only kill a partial amount. The NPC will tell you how many Cellions, Grupins and Lioners to keep in the map, so you have to kill the monsters in a way whereby you will only kill until there is a correct number of monster left in each row. If you accidentally overkill, the party leader will have to talk to the NPC to reset the monsters. There are 5 monsters in each row and you have to kill 1 to 4 monsters in every row, whereby the number specified by the NPC is random.

Tip
Use single target skill to kill the monsters to prevent overkill. Note that the Cellions are in the bottom row, Grupins are in the middle row and the Lioners are at the top row. The extra rows above the Lioners serves no purpose at all so you can ignore them. 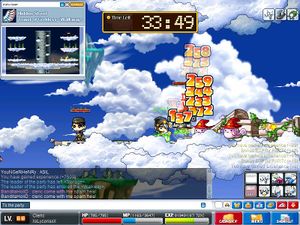 This area is located outside of the tower. Pixies of all kinds swarm on 6 platforms located along the edges of the map. Luster pixies on top platforms, lunar pixies on middle platforms and star pixies on bottom platforms. Party Members must jump to the door in the center tower that warps to the area they must reach. When killed, the pixies drop the rubble pieces. To get out, all the 30 pieces must be collected by the whole party. When the pixies are defeated, they release their souls and become Ghost Pixies, which are now unrestrained by gravity and fly about the map. 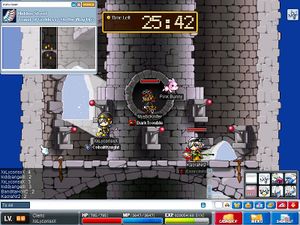 Orbis PQ's Jump area, At the top of the tower. This is the Finish.

This is probably the hardest stage. It involves finding the proper warp spot to progress. If you step on the wrong warp, you will be sent back to the beginning. It resembles Ludibrium PQ stage 6 in many ways, except the sequence is randomised every different pq. You can skip some platforms by jumping and pressing the up key. Then everyone follows it and repeats until reaching the top. Here there are three switches that can be changed by hitting them with a melee attack. Time wise, the party may hit the left switch, then the middle switch, then the left switch. Success is denoted by a CLEAR. The leader then talk to the NPC to get the piece. 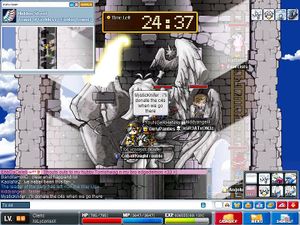 Orbis PQ Center Tower. The statue is being restored.

Now that all of the other rooms have been cleared, and the pieces collected, the statue must be restored. The leader in possession of pieces, must click on the areas with the click sign. Once this is done, the piece will be absorbed. This stage is completed when all pieces are reintegrated into the statue of the Goddess. 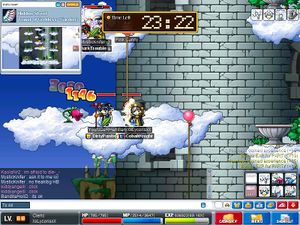 Orbis PQ Garden. The Nependeaths must be killed.

Nependeath are located on various clouds floating outside the tower. Once defeated, the Nependeath drop seeds, which look similar to those used to transport to Leafre. They must be planted on to flowerpots on solid platforms along the edges of the map. Once this is done, either a Nependeath or a Dark Nependeath will spawn. Once the Dark Nependeath has been defeated, Papa Pixie Will spawn at the bottom of the map.

Papa Pixie roams the floor of the Garden map. Any undefeated Nependeath remain. Papa Pixie has Darkness, Slow and Skill Seal, like Alishar, and is capable of summoning Star, Lunar, and Luster Pixies. Once these pixies are killed, they become Ghost Pixies. Once defeated, the party leader must talk to the NPC to get the grass of life. The leader may then leave the room.

The party will return to the Central Hall. Have the leader click on the middle of the statue so that Minerva the Goddess will be revived by the grass of life, and talk to her to complete the PQ.

Party Points left will be reset once every 8 weeks.

Note: The monster stats will vary based on the average level of the party, but will NOT be affected by penalties in level difference.