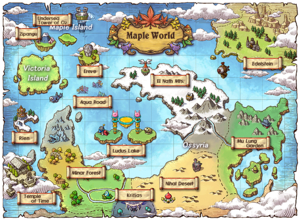 Map of the Maple World.

Ereve is the floating island where Empress Cygnus and the Cygnus Knights reside.

Rien, a snowy island, is the land of the Aran.

Masteria has a theme of the past meets the present meets the future. Here you can find many plays on different cultures from around the world. Masteria currently has three towns (though many future towns have been mentioned):

In addition, there are two marriage towns: 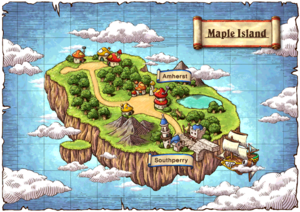 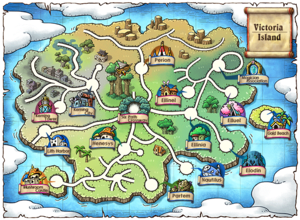 There are various smaller areas on Victoria Island, as follows:

Eons ago, Victoria Island and Ossyria were once connected, but over time have become separated. It was once completely ruled by a culture called the Sharenian, who built a lot of the deserted structures on the island, like the Temple of Golems near Henesys and the Sanctuary at the end of Sleepywood's Ant Tunnel. This culture collapsed mysteriously under the rule of Sharen III. The Guild Party Quest is based upon the rule of Sharen III.

The following World Maps of these Victoria Island areas have been released: 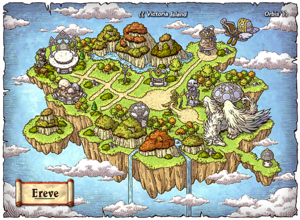 Ereve is home of the Cygnus Knights, a group of fighters who, with the aid of elemental sprites, combat the forces of the Black Magician. It's a floating island located between Orbis and Ellinia, kept aloft by the powers of the sprites. Ereve can be reached by taking a boat ride from Ellinia. The island is home to the empress of the Maple World, Cygnus, and Shinsoo, the divine beast who chooses and guards the current emperor or empress. The inhabitants of Ereve seem to be bird-like in nature. 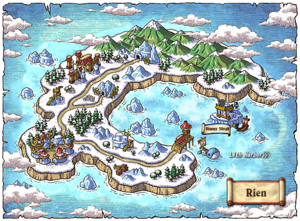 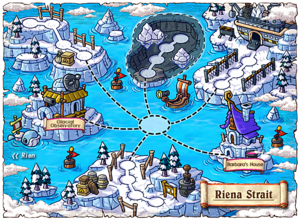 Rien is an icy, snow covered area. It is also the island where you start as an Aran (similar to Warriors).

Rien is an island located north of Temple of Time and close to Horntail's Cave at Leafre. 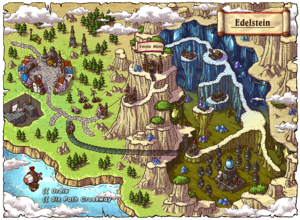 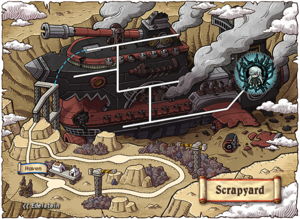 Edelstein is a small, industrial town where members of the Resistance begin their training. This town is in control of the Black Wings, who the Resistance is fighting against. To begin your first job, you must complete a few small tasks for inhabitants of the town and reach level 10. You are then able to become either a Battle Mage, Wild Hunter, Mechanic, or a Blaster, and become part of the Resistance. This is also the town that Demon Slayer / Demon Avenger and Xenon begin in after their introductions.

Edelstein and the Verne Mine are located on a continent north-east of the rest of Maple World. 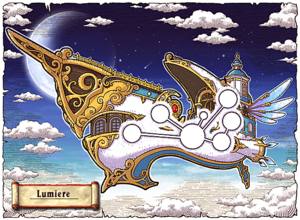 Lumiere (Crystal Garden in KMS) is the airship of the Thief Hero, Phantom. It can travel to anywhere. It is also the beginning of the Phantom's storyline. 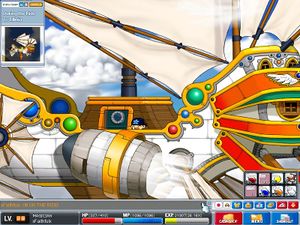 To reach Ossyria, players must take a flying ship from Victoria Tree Platform.The trip is free usually, although some places can cost a few hundred to a few thousand mesos.

An alternative method of transit to Ossyria is by using the Leafre-Ellinia portal, available if the player has a Magic Seed. This transport is instantaneous, but the only areas that can be accessed from Leafre are Orbis and Temple of Time. In Nautilus Harbor, a similar teleport system can be used to reach Omega Sector, which provides relatively easy access to Ludibrium and eventually the rest of Ossyria as well.

The World Maps of Ossyria are as follows: 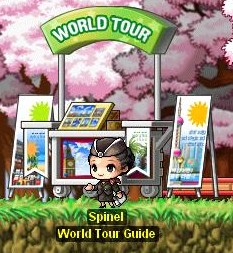 Originally, these continents were not a part of the main game. Each new continent was an expansion to each original versions. JapanMS was the first to expand their version with a continent called Zipangu. These additional continents reflect more on real world locations or real world things, with a few exceptions. At first, these new continents were to be exclusive maps for each version they originated from. Zipangu for JapanMS, China for ChinaMS, Formosa for TaiwanMS, Siam for ThailandMS. As of September 2006, the exclusive maps started to become accessible in other versions of MapleStory via an NPC named Spinel the World Tour Guide.

For MapleSEA, Singapore has been released with three areas: CBD, Boat Quay Town and Ulu City. Malaysia was released later on, covering the other major country that makes up SEA's player base. 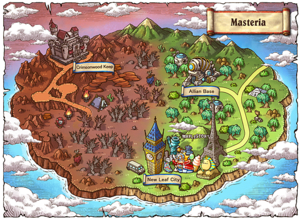 Currently there are two towns located on this continent: New Leaf City and Haunted House. The area of Crimsonwood Keep has been the most recent addition, though it does not (yet) sport a conventional town map. A fourth town, called Krakia, has been mentioned by NPCs in game. Many areas that will be expanded in the future can be seen, particularly Vineland, Affluent Tower, and a Sphinx which resembles a Yeti, appropriately named the Yetinx. Also there has been mention of a new world named Versal, with one NPC planning on opening a portal to that world. Many legends surround the island and its history. Stories range from immortal warriors and mad scientists to threats from outer space. According to new information, the continent, which was originally believed to have sunk into the ocean, was actually warped to another world, Versal. It was returned to the Maple World through a mysterious deal between the Mayor and an unknown person.

Masteria takes its name from the many warriors who came to the continent looking to master their fate and find their destiny. It has mysteriously risen from the sea after a 1000-year absence. This once fabled continent was home to a technologically advanced civilization that used a myriad of techniques for benevolence...before the dark times. There are very few records of the final act which caused the continent to plunge into the sea, and its jewel, Olde Sapp Village to be erased from the Maple World. 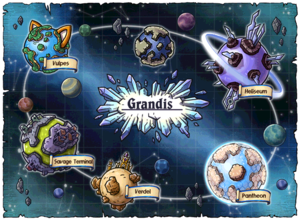 A different dimension, home to the Novas. 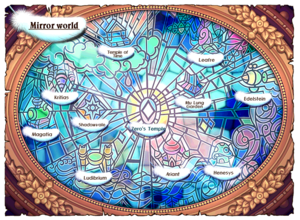 A regional map of the mirror world.

A high-level dungeon featuring areas of the main regions of Maple World, for Zero only. 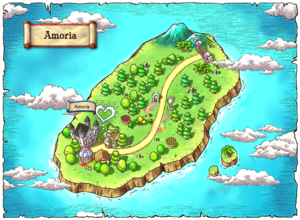 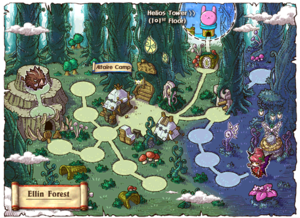 Time Periods are areas which already exist, but as they appeared in the past rather than their ordinary modern appearances. These can be accessed through the Time Control Room in Ludibrium. Currently, there is only one town in the past which is accessible: Ellin Forest. It is the past version of Ellinia's forest on Victoria Island. Maps at the borders of the Ellin Forest around Altaire indicate that there may be past versions of other Victoria Island towns to visit in the future.

Premium Road can only be accessed from a cyber cafe that has established a contract with the local programming staff of MapleStory. The cyber cafe grants bonuses such as EXP boosts by 1.5x (1.25x in MapleSEA), but only offers a limited amount of maps. Players at participating internet cafes can access Premium Road by talking to an NPC in Kerning City or to NPC Matilda in the Korean version.

Ardentmill is a town that lets players learn Professions. These professions consist of Herbalism, Alchemy, Mining, Smithing and Accessory Crafting. It is accessible via every major town in Maple World through a portal. Players must be at least level 30 in order to learn professions and access the town itself.

At level 35, a player reveals 5 traits, which are Diligence, Ambition, Charm, Empathy and Insight. Each trait has a maximum level of 100. Each 5 levels, a trait will reveal an effect on the player. The player could have less death experience penalty, more maximum MP, more quest experience and many more. Diligence can be gotten for staying in-game for at least an hour, Ambition from boss monsters, Charm from fame, Empathy from harvesting herbs, and Insight from mining. But, there are also other ways to get traits to level up, such as useable items, Party Quests and also Quests.

The player can learn up to two professions. There are only 3 combinations available : Herbalism + Alchemy, Mining + Smithing or Mining + Accessory Crafting. Each profession has a maximum level of 10. There is also a fatigue system where each character gains a fatigue point when mining, harvesting, making potions or making equipments. When fatigue reaches 200 (or 100 for EuropeMS currently), the character cannot harvest/mine/craft/make anything. When one hour passes, the fatigue drops by 5. To fasten the process, players can buy a drink, but it comes with a price (especially in MSEA).

The profession system replaces the maker skill, which is now defunct. 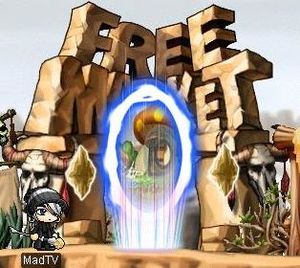 The Free Market is a place set aside for people who wish to sell their items by setting up a shop. They can either use the regular 'Buying item' method, or they can set up their own miniature shop where a maximum of 3 people are allowed in at once. In order do the latter, players will have to purchase a special permit available only through the Cash Shop. Additionally, NPC merchants can be hired to sell these items so that the player may continue to use their character while the shop is open. The merchants come in a variety of appearances, ranging from elves and teddy bears to Robots, Maids, and Granny. In some versions, certain merchants have differing features, such as the ability to notify the player of a sale.

Even while on another island, such as Ossyria, one may still make contact with people in Victoria Island through the Free Market. One can communicate and trade with someone entering the Free Market from any town. However, one cannot use the free market to travel between towns.

In MapleSEA, the Free Market includes a event map; Image Puzzle Quiz. The entrance to the Event Map is located at the far right side of Free Market.

Transportation is important in the world of Maple Story to travel across continents and subcontinents.

Cab/Taxi
The main transportation in Victoria Island to travel between towns, including to Sleepywood (but not back). The trip is instantaneous. In GlobalMS, the NLC Taxi exists on Masteria, and takes players from New Leaf City to Phantom Forest and back. The trip is both free and instantaneous.
There is also a Danger Zone Taxi in Sleepywood and parts of Ossyria. It makes the following trips:

Scroll and Capsule
Allow instantaneous transport to towns on the same continent.