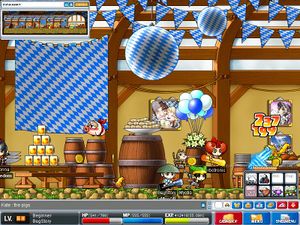 The Beer Tent is an event town from EuropeMS. It was created for the German Festival "Oktoberfest". Though the beer stored here is non-alcoholic, somehow Ribbon Pigs, Blue Mushrooms, and Evil Eyes have sneaked in and have gotten drunk off it. There is a lot of food stored here too, such as pretzels, bratwursts, turkey, ketchup, and mustard. Additionally, there are pictures, presumably from previous Oktoberfests, of Amoria residents enjoying the beer hanging in the background. Players here can acquire sausages like hats from a quest, they expire in a month. The hats have 15 attack, 15 magic attack, 5 speed and 7 slots. You can get the hat from killing 50 of each monster in the beer tent, the pre-requiste is to get 50 things from monsters, not like blue snail shells but like maple leaves, all the monsters drop the items! Recently, MSEA has also released this map from September to October.