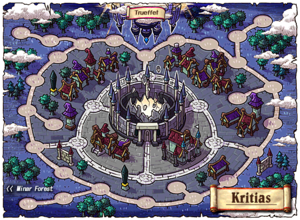 Kritias is an upside down tower. It is connected to Leafre in Sky Nest I.

There are multiple ways to enter Kritias:

Similarly, you can exit Kritias by the following:

The Kritias shop is located at the Kritias Market (when you use Pantheon or Veritas teleport to Kritias you will land on that map). It is represented by the NPC Kuelbern. This shop can easily be classified as the best shop in the whole game that is permanent (other than the ridiculously high costs of items). The shop uses 2 type of coins, the Enheim coin (silver, derived from the name of the Academy of Magic) and the Kritias Coin (gold, derived from town name). The shop sells the following items (bolded items are highly sought after):

It is a pocket item sold in the shop and has unique characterstics (which is why it has its own section). It is part of the Inverse Set.

The Inverse Codex starts off with All Stats +2 and Weapon and Magic ATT +2. Stats can be increased with its level.

At Max Level 13, the Inverse Codex has the following stats:

However in exchange you have to feed 12,975 Anti-magic daily to maintain the maximum level and its stats.

To acquire anti magic and anti magic stones, you have to participate in activities in Kritias. Note that you must have an Anti Magic Condenser to collect anti magic.

Category 2 quest will not be rated as the demand is very similar across all quests.

If multiple quests require the same monster to be hunted, it can be completed at the same time, transforming a quest that is rated more time consuming to be otherwise (especially "Ominous Energy" (category 2) combined with any burning quest and any frozen quest), if you are intending to complete the quest in Category 2. However, be careful, quests asking for general item drops that are not "Quest Item" tagged will be in conflict as they ask for the same item, so you need even more of that item to complete multiple of such quests. (However, they can be obtained even when the quest is not active)

Category 1 quests reward 12,000,000 (12 Million) EXP and 2,500 anti magic each (given as an Use item, so if you have AMP entropy active, it will give 3,750 instead. Does not count towards the daily limit). You must have the Anti Magic Condenser to absorb the half magic or else you will not be able to double click to use it.

Category 2 quest rewards 12,000,000 (12 Million) EXP and 3 Anti-magic Stones (etc item). If you are not trying to exchange for Kritias Commemorative Coins, you can skip category 2 since it does not reward any anti magic.

Monsters in Kritias have a low chance to drop a fragment of anti magic. The chance is estimated to be around 2% at 1x. When collected, it is used immediately (10-20 per fragment, additional 50% if AMP entropy is used). The base amount counts towards the 10,000 anti magic limit while the 50% additional from AMP entropy is not counted towards the limit.

You must have the Anti Magic Condenser to collect the anti magic, otherwise you will receive 0 Anti magic upon picking up.