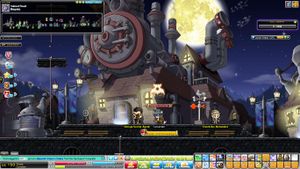 The largest laboratory building, belonging to the Alcadno, in Magatia.

Magatia is located in the Nihal Desert, north of Ariant. It also has a night time theme like Formosa's Night Market. It is a medieval themed town, with elements of both powerful new technologies and secret monsters created by Alchemy. Inside the town lies two underground Laboratories, one for each group, one filled with robotic and electronic monsters, and the other with biological monsters that seem to have been created by accident. Many quests are available from the NPCs in the town of Magatia. The city's primary source of income comes from the manufacturing of Lithium stones, created from rare ores found in the desert. These refined gems are shipped to Orbis to help keep the city afloat. The ores can also be seen on the ship that travels from Victoria to Orbis. Where the knowledge of Alchemy comes from is still a mystery, though there are rumors that the Black Magician has had some influence.

The town's residents are from one of two groups: The Alcadno and the Zenumists. The Zenumists practice Life Alchemy, and live in the old medieval style buildings on one side of the town. The Alcadno, on the other hand, use advanced technology in conjunction with Alchemy and created robots on their side of the town. Basically, Zenumists attempt to use Life particles and Alcando use Machinery. The groups are not on friendly terms, and don't allow members of their group to interact with the others. The ultimate example of this is the "Romeo and Juliet" Party Quest, where players must team up to reunite the forbidden lovers from each of the two factions. To learn more, a visitor will be forced to join sides, though it is possible to join both by simply picking up both introductory quests before completing one of them.

Right before Magatia, you will be in the Sahel Desert region of the Sunset Road, which is counted as a part of Magatia. Here, you will encounter Sand Rats, Scorpions, and Dark Sand Dwarves. 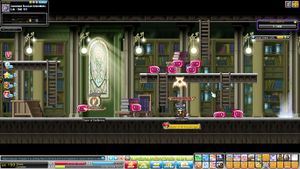 The cube slimes in the Zenumist Laboratory.

Inside this Laboratory, accessed from the far left of town, there are many books and Library-type areas, which have been invaded by monsters. Several of the monsters look to have been created in experiments. Most of the monsters are deformed biological creatures. The first map is occupied by animated plants in bottles, given mobility by alchemical procedures. Later on, the monsters only become more and more grotesque, remnants of failed experiments and attempts to create a human. Finally the strongest species of monster in the area is found, Homunscullo. Romeo can also be found here. 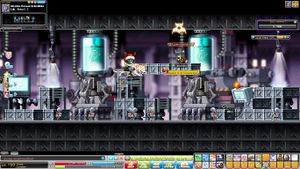 The Roids in the Alcadno Laboratory.

The other laboratory, accessed from the giant building pictured above, belongs to the technological group, the Alcadno. These maps have a much colder and more modern feel to them. Most monsters here are robot-like monsters. The first monsters encountered here are the Iron Mutae and Reinforced Iron Mutae, possessed pieces of metal. Further on, there are even stronger metals that have been possessed, like Mithril Mutae and Reinforced Mithril Mutae. As a character progresses through the laboratory, they will encounter the Roids, a line of robotic monsters created by the Alcadno. Deeper in the laboratories are the D. Roys, the strongest robots. Juliet can be found here. The boss monster Chimera also recently began spawning in the area between the institutes, in a secret path.

Between the Zenumist and Alcadno Laboratories, there is a secret passage connecting the two. The Black Mage's laboratory is accessible via this passage. Chimera can also be found here.