One begins to see El Nath's snowy nature starting at the 7th floor of Orbis Tower, where the floor becomes frozen over. It shares this nature with the holiday event town of Happyville. Upon exiting the first floor, the player's HP immediately begins to decrease by 10 every 5 seconds. This is similar to the drowning effect of Aqua Road. On every map outside of the main city, players lose HP every 5 seconds as a result of the extreme cold. This can be remedied using Red Bean Soups available in the El Nath potion shop, though it is not an economically viable method.

Due to the snow, traveling around El Nath can be fun, as players slide around on the ice. By wearing Snowshoes available exclusively in El Nath, players will not slide around but instead walk normally, as in all other towns (except perhaps Aquarium). Snowshoes have the unique feature of Zero Slide, causing an instant braking once the movement key is released. Snowshoes also have the convenient ability to prevent sliding on other slippery surfaces, such as in the Showa Sauna, due to their Zero Slide. Snowshoes are also commonly used because they have 7 slots as opposed to the usual 5, and come in colors distinctive to each class. Common or beginner only snowshoes are not available in El Nath, but some versions have high leveled snowshoes, with common job and even some additional stats added onto them. A scroll also exists to add Zero Slide to non-snowshoes, at a 10% rate.

Traveling right, players come across the El Nath fields, which include Jr. Yetis, their senior and dark forms, Hectors, Pepes, and many other monsters. At the top of a certain map, players reach a dead end unless they are level 50 or above. There is a potion seller at this map, who has taken advantage of his last-stop location by raising prices on these items. 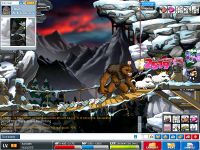 The last map at Sharp Cliffs. A werewolf is attacking, guarded by a group of white pangs.

Once inside the Dungeon, Dead Mine, players encounter stronger monsters, as well as Dark monsters, which have been influenced by the evil emanating from Zakum. Beginning with Yeti, followed by Dark Yeti, and then the combined Yeti and Pepe, as well as Dark Yeti and Pepe. Snowman has appeared in this area of El Nath, amongst the Yeti and Pepe. Lion King's Castle can be accessed via the Dark Yeti and Pepe map, which is the castle that is seen in the background of the Wolf Territory and the Forest of Dead Trees. Much more difficult monsters such as Werewolves and Lycanthropes lurk near the end, posing a danger to anyone trying to pass. Coolie Zombies and Riche can be found here. 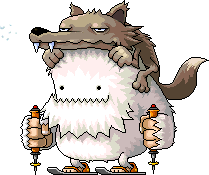 Dead Mine and Caves of Trial[edit] 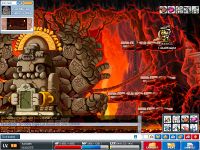 The Altar of Zakum.

Beyond the Forest of Dead Trees is the entrance to an Abandoned Mine complex. In the first four rooms of the cave are Miner Zombies, the undead remnants of fallen Miners who worked the mines. At the end of the Dead Mine is The Passage, the breaking point between the Dead Mine and the Caves of Trial. Flyeyes roam this map. Past the Passage, you can find some of the most difficult monsters in the El Nath Mountains Region: Cerebes and Bains. At the end of the Cave of Trial. After completing the Zakum Party Quest, players may fight Zakum.