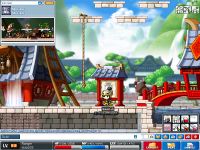 Mu Lung is a town in the high mountains based off Ancient Asian times, much like Korean Folk Town, along with many animal NPCs and animal monsters. The buildings in the village are red with blue roofs, that somewhat resemble the buildings in Zipangu. To reach Mu Lung, you must ride in the pouch of a bird crane, like a newborn baby from Orbis Station. Mu Lung has many citizens and buildings, including a Hair Salon, Plastic surgery and skin care, the owner of the Peach Farm, named Tae Sang, and the usual weapon, armor, and potion sellers. One particularly unique resident is Mr. Do, an eccentric doctor who can make a variety of unique potions and buff items, as well as scrolls, when given certain ingredients. Additionally, the Mu Lung Temple area is reached at the right entrance in Mu Lung, where Masters teach eager players as disciples. Even the monsters living near Mu Lung practice to become masters. While a normally peaceful place, the people of Mu Lung live under the constant threat of invasion by King Sage Cat, the leader of the Sage Cats. 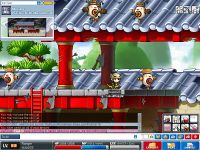 Off the Mu Lung Temple area are the Practice Fields, which resemble a Shooting Gallery. Stars and arrows and even axes are sticking out of the pillars here. The only monsters found here are the animated Straw and Wooden Target Dummies. The practice field maps increase in difficulty as one travels further from town, with one for each of the following levels: Beginner, Easy Level, Normal Level, and Advanced Level. The Beginner and Easy level maps are extremely good for 1 or 2 people to train on. 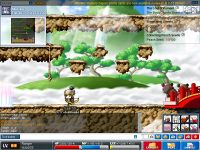 Venturing outside of town leads to the Sky Forest, where monsters that look like real animals, like chipmunks and porcupines, roam around. Beyond that are the colorful Red and Blue Flower Serpents. A section of Sky Forest is called the Wild Bear Area, where one encounters the yellow belt Grizzly and red belt Panda. Tae Roon, the area boss, spawns here. Tae Roon was once a disciple of the master No Gong, but is currently under the control of King Sage Cat. 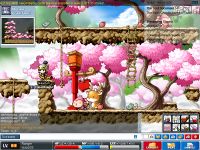 Past the Sky Forest, you can find the small area of Peach Farm. This area is a forest of peach blossom trees. The main monsters here include Reindeer and Peach Monkeys, a thieving pink monkey that runs off with the fruit from the trees. A side road leads to the Foggy Forest, the Virtuous Forest, and the Goblin Forest, where Book Ghosts, enchanted books possessed by rain water spirits float along the ground and two-legged Sage Cats with fans roam. It is here that Mu Lung's second Area Boss, King Sage Cat, is found. At the end of the Peach Farm, there is a cliff that drops off down to the Herb Town area. 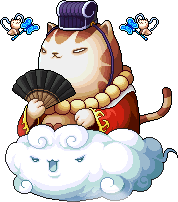