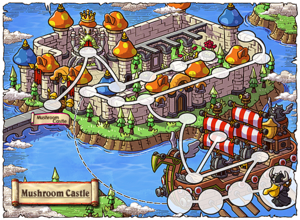 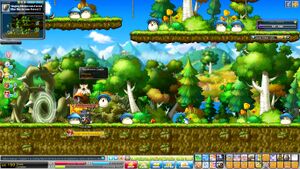 The entrance to Mushroom Castle.

Mushroom Castle is a theme dungeon accessible at Level 60+ by entering a portal located at Singing Mushroom Forest: Blue Mushroom Forest 2. The story of Mushroom Castle continues where the previous story left off. King Pepe and his minions have retreated, and the Mushroom Kingdom is now reopen. The Mushking is now holding a contest to find a bachelor suitable for his daughter Violetta. As Violetta is a charming mushroom (who looks quite ugly to us but beautiful to the mushrooms), all of the mushrooms want to marry Violetta. However, the Prime Minister, the culprit behind King Pepe taking over the castle in the past, has returned for vengeance, now bringing an army of viking seagulls with him to raid the castle. Their captain, the Black Viking, arrives looking for the "beautiful" Violetta, and upon seeing how ugly she is, kidnaps her out of spite, leading to the player (you) having to rescue her.

Mushroom Castle consists of 3 areas: the Castle Corridors, the Castle Walls, and the Viking Ship.

As the quest progresses, the NPC in the maps can differ as this Theme Dungeon uses a new storytelling method to make it more realistic. However, the list below should be sorted out based on the order which you would encounter the NPCs.

All quests under this has a prefix of [Theme Dungeon].

For Her Smile 1[edit]

For Her Smile 2[edit]

Return of the Prime Minister[edit]

Move to the Castle Rear Entrance[edit]

This quest does not have a prefix

Quest prefix for this is [Title] instead of [Theme Dungeon]