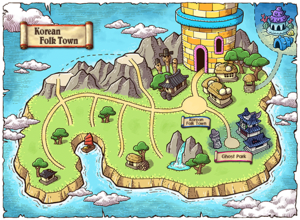 Korean Folk Town is one of two towns based on Korean culture, sharing that distinction with the area of Mu Lung. Bamboo huts are scattered around the town. Korean Folk Town is located on a small island in Ludus Lake, alongside its twin island Omega Sector, both of which are used to keep Ludibrium afloat via two massive towers. There are two ways to travel to Korean Folk Town:

As a result, Korean Folk Town serves as a gateway between Ludibrium and Aqua Road.

The Dimensional Crack in Ludibrium, as well as an assortment of seven mysterious gemstones stashed away from the library, led to the books of Helios Tower's Library becoming distorted. Many of the quests here involve setting the legends straight and helping the characters overcome their problems caused by the seven stones. The stories are as follows:

On the left side of town, you will find the entrance to Black Mountain. There, you can find monsters taken from Korean mythology. One of these monsters is the Moon Bunny that looks the same as the one that must be protected in Henesys Party Quest. The early Black Mountain area has a sunset background, while later areas as well as early divergent paths have a night sky background. At the end of the black mountain, there are monsters called King Goblins, which appear in three colors: blue, green, and yellow.

The NPC's in Korean Folk Town are characters found in Korean Folktales. Each character provides a quest fairly related to the original stories they are from.

Ghost Park is a training map that takes place after Korean Folk Town's story (note that you don't need to complete the quests to enter). It can be entered at the top right portal of the town. You can enter 5 times daily, each time lasting 10 minutes (if you can survive). If you die, you will be booted out immediately with no EXP loss.

As your party kills monsters inside, kill count increases. A high kill count will increase the monster EXP further (increment is not affected by your multipliers), up to +1,000%.

Note that monsters spawned will be bigger and also deals more damage too. Monsters deal % HP damage so nobody can run away from dying.

As your HP (measured by the proportion of your existing HP compared to your maximum HP) goes lower, your EXP gain will increase momentarily until you regain lost HP, up to +500%.

No healing or drain effects, as well as recovery potions, can be used. Instead, every 1 minute, there will be a recovery rune that spawns. Use it to recover 100% HP for all party members.

Additional rewards can be gained by participating in Ghost Park.

There are 7 different colours of the pocket item. Collect 1 of each and talk t Spiegelman to trade for a Golden Charm pocket item (Level 120, untradeable, All Stats +4, Weapon and Magic ATT +4, HP +200)