The second area produced by MapleSEA, based on the country of Malaysia, one of two nations which make up the majority of SEA's player base. It is likely heavily influenced by culture, similar to Singapore. The Malaysia map has been confirmed to be split into two areas, called Trend Zone Metropolis and Kampung Village. The former town can be reached from Singapore's Boat Quay Town. In GMS, it can be reached via NPC Audrey, found in Singapore's CBD. 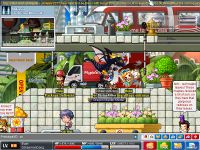 Trend Zone Metropolis (Kuala Lumpur) is the first town in Malaysia. It can be reached by the portal available in Singapore's map Boat Quay Town. There are two exits in Trend Zone Metropolis. One links to Boat Quay Town while the other one links to Outskirt of Muddy Banks. This town reflects the advanced side of Malaysia, with a train seen in the background travelling to and fro and the widely spread high-rise buildings around town. 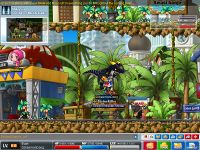 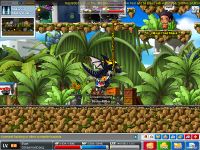 This series of maps are between the Outskirt of Muddy Banks to Kampung Village. Buildings can be found here, but they slowly fade away as the village approaches. There are plenty of shops located around here, but they have all been abandoned due to the rise of the monsters. Chlorotrap, Emo Slime, Oly Oly, Dark Fission, and Rodeo reside around here. 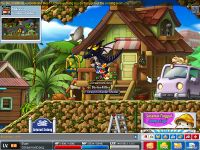 This is the second town in Malaysia. The background suits the name of the town as Kampung houses can be found in this town. This town reflects the other side of Malaysia, namely the more rural area, with a couple of huts built out of wood and sticks constructed in the town. There is also a NPC that sells exclusive Malaysia potions, in addition to those Singapore-exclusive potions. There are two exits in Kampung Village. One leads to Muddy Banks 3 while other one leads to Hibiscus Road 1, which eventually leads to Fantasy Theme Park. 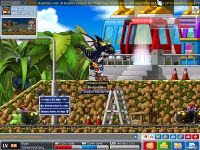 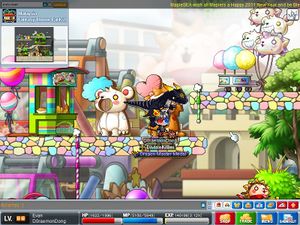 Fantasy Theme Park is the most recent expansion of Malaysia. This area reflects the real life Genting Theme Park located in Malaysia. It features a theme-park like background with teddy and lion dolls as mascot monsters. It also features many rides as backgrounds, like a Viking Ship, Big Drop and "Dinoland". It is accessible by going into a portal, placed at the entrance of a Cable Car, in Hibiscus Road 1. It is the "dungeon" area of Malaysia. A mini-dungeon also exists in this area.

This map features 2 main areas: Fantasy Theme Park and Spooky World, in which the two bosses reside in.

Fantasy Theme Park features 2 Bosses: Targa (a Teddy Bear Boss) and Scarlion (a Teddy Lion Boss). Both will be summoned in this map. Both of them drops hats that boost better stats than Zakum Helm 1. However, the fight against this two dolls will definitely not be child's play, as they are both mobile! In fact, Targa has a laser attack that can hit the whole map! Beware of Cancel Weapon and Magic, as well as stun attacks too!

This mini-dungeon is located in Fantasy Theme Park 3. It is a smaller-than-average map with 2 monsters: Jester Scarlion and Froscola. The spawn rate here is excellent. Many spammers love spamming here due to the small map.