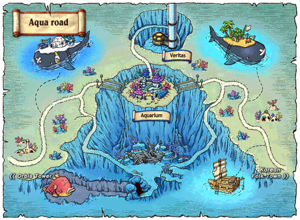 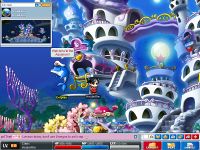 Aquarium is the only town under the sea and is the main town of Aqua Road. Inside the one building are shops selling weapons and armors. There is an NPC outside called the Dolphin Taxi, which can take players to the furthest map, The Sharp Unknown, for 1,000 mesos, or a Dolphin Taxi Coupon, obtained via a certain qyest. At The Sharp Unknown, a story book similar to the one in Helios Tower's Library, is located, which will take the player to Korean Folk Town. The Dolphin Taxi also has an additional function of sending players to Herb Town for 10,000 mesos. Also, the Fishing King mini-game from Taiwan's Night Market area takes place in an area similar to Aqua Road. Kenta, the inventor of the Tamable Monster Mounts, resides here. 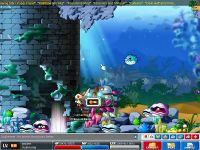 Aqua Road is an underwater-type area. The way players navigate differs from the norm, and there is also an HP-reducing feature similar to El Nath. It is the effect of drowning underwater. Air bubbles purchased from the shops in town and dropped by monsters can negate this loss for 15 minutes at a time. Also, by doing a quest for Hughes in Orbis Tower B2, one can acquire an Air Tank that allows for breathing in Aqua Road permanently when equipped. Like Korean Folk Town, Aquarium does not have a World Tour NPC.

Aqua Road is accessible from the 2nd basement floor of Orbis Tower, or by descending down the well in Korean Folk Town. It can also be reached from Herb Town via the Dolphin Taxi.

Players may jump to swim upwards. The monsters here are generally harder to defeat, due to the strange gravity system. The weaker monsters in the shallows are rarely hunted, mostly due to the fact that better training alternatives exist. At the far left, a hole in the Orbis Tower allows players to exit, and if one continues walking to the right, they will reach the town of Aquarium. 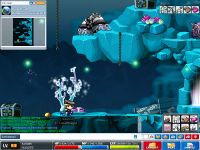 The first map on the right side of Aqua Dungeon.

There are hidden streets near the outskirts of Aquarium to take you to the Aqua Dungeon. The monsters there range from level 91 to 110. If you enter from West Aqua Road, you will encounter Bone Fish and Bombing Fish Houses, which spawn 6 Gobies once defeated. If you enter from East Aqua Road, you will encounter Squids, Risell Squids, and Bombing Fish Houses. Past these two maps is the Grave of a Wrecked Ship, where Sharks and Cold Sharks reside with more Bombing Fish Houses. Accessed from here is a map where the giant fish boss Pianus is located. Pianus's drops are capable of being picked up by anyone in the room, regardless of whether they fought the boss or not, providing a deterrent to prospective drop hunters. 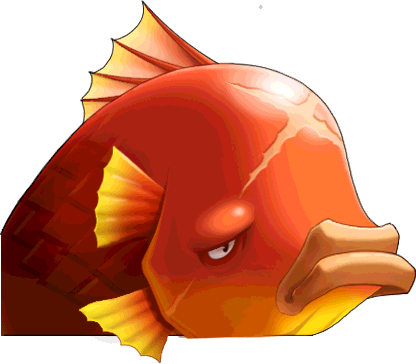 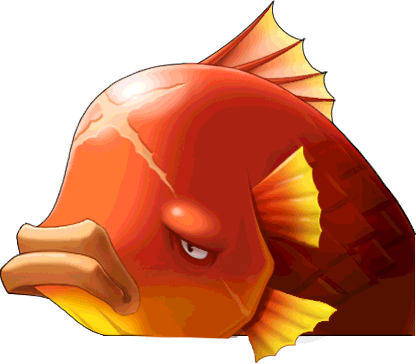