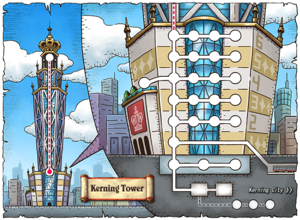 Kerning Tower is a theme dungeon accessible to players from Levels 145+ via the Kerning City Subway.

Blake's record company has fallen on hard times, so Jake calls on you to check on him. Blake, having produced new music, asks for your help to look for a new star within Kerning Tower. But little do you know, Kerning Tower is shining with talent.