Evan is a Magician-type Hero class that is separate from Adventurers; similar to Aran. 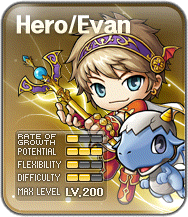 Once, there was a normal boy that lived near the village of Henesys.
In a field, he discovered a dragon egg that he saw in his dreams.
And so, the story of Evan the Dragon Master unfolds.
In the beginning, Evan and the baby dragon knew nothing.
But with the growth of the baby dragon, Evan’s strength continues to increase endlessly.

Since Evans are in the family of Magicians, they use INT as their main stat and LUK as a secondary. It is recommended to add into INT only, since LUK is no longer useful as of the Tempest Patch.

The Evan class has a unique element that no other class has: a dragon that attacks for you. All attacks and buffs are executed through your dragon. The dragon is not a summon; it's a part of your character. After a player achieves level 10 and completes the first job advancement, a baby dragon awakens from a Dragon Egg.

New Evans begin in a dream. Run to the right and continue through the maps until you reach the dragon.

After conversing with the dragon, you wake up in your bed at home on Utah's Farm. Well wasn't that a weird dream? Walk right to get some yummy cookies an- Oh! What's that? Dirt in the form of a symbol, how usual. Head down and talk to your mother (Anna). Head outside and talk to your big bro Utah. Complete the quest and fetch some exp. (level 2) Accept the next quest and go left. You should see a dog. Complete the quest and level-up. (level 3) Head back to Utah to accept another quest. Open up your item inventory (I button) and eat the sandwich. Afterwards, head into the house and talk to Anna to complete the quest. (level 4) Equip the straw hat and accept the next quest. Go back outside and FOLLOW (!) the arrows. If you don't follow them in the next map, you have to backtrack. After another map teleport, you should be at the NPC Gustav. Complete the quest to level-up. (level 5) Accept another quest and jump down to kill the stumps for 3 branches. Complete the quest and accept the next one. (level 6) Follow the arrows again for two maps, and fall in the pitfall. Head right two maps and click on the giant egg. When you've returned, talk to the pig and return left to Gustav. (level 7) Accept another quest and head back to Anna. (level 8) Return outside and talk to Utah. Head to the right to kill the foxes. Head back to Utah to scare him and fetch some exp. in progress. (level 9) You will also get a wand but you can't equip it until you're lvl10. Accept another quest, head left and talk to Gustav (follow the arrows). Attack haystacks and collect whatever they drop. Feed Mir(your dragon). Head left to kill some pigs. Keep killing pigs until you have 10 porks.