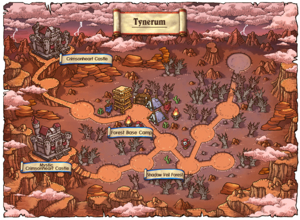 Crimsonheart Castle is a theme dungeon accessible to players from levels 130+ by starting Grendel's first few quests, and then accessing via the Dimensional Mirror. The area of Tynerum is accessible from here.

Grendel received a message from the Crimsonheart Castle in Tynerum and wants you to figure out what's happening. While there, you find that there are 12 demons trapped in the castle waiting to be sacrificed. You find out from a talking statue, Ridley, that it is up to you to rescue the demons, and you must save them by killing monsters to clear a path out of the castle.

While doing these quests, you will also have to complete several mini-games to access the next area after completing one. The first mini-game, Ghost Sniper, involves you having to aim your mouse at Jr. Wraiths that fade in and out, and click to shoot and eliminate them. The second mini-game, Castle Climb, involves climbing to the top of the map while avoiding falling meteors and purple lights that can stun, and clicking on the box at the top of the map. The third mini-game, Untrappable, involves a jump quest filled with totem poles, falling Stirges, and several other obstacles. On the way, you can open boxes to obtain fragments for the last item you need, a Night Mark (100 fragments are needed), or you can open the box at the end of the jump quest to obtain a complete Night Mark.