Not to be confused with Haunted Mansion, the event area. 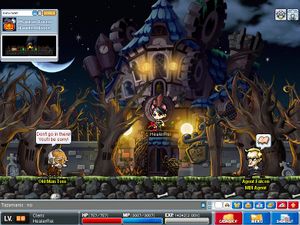 The Haunted House is a mini town of Masteria which has a night theme like Korean Folk Town's Black Mountain, Zipangu's Cemetery, Formosa's Night Market and Magatia. To reach the Haunted House in GlobalMS and MapleSEA, you must talk to the NLC Taxi located at the far left end of New Leaf City. In ChinaMS and TaiwanMS, it can be reached by talking to Edmunds the Butler, who is located in many towns. This small one-map town has only two NPCs, Old Man Tom and Agent Falcon, both of which gave out quests to players during Halloween Event. Agent Falcon has yet another quest which is now permanently available. In the event versions of this town, the NPCs located here vary depending on which version it is visited in. It is one of two towns located in the region of Phantom Forest, the other being Crimsonwood Keep. 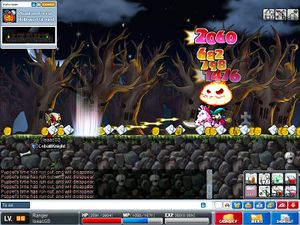 The Headless Horseman in Phantom Forest

There are only two maps immediately around the mansion that are labeled "Phantom Forest": One is the main town map, and the other called Hollowed Ground. Here, you will find Jr. Wraiths here along the grave of the Headless Horseman. This boss monster spawns every 6 hours very rarely near its' tombstone amongst the Jr. Wraiths. Hidden portals on either side of the main town map connect to the Phantom Forest areas leading to Crimsonwood Mountain. 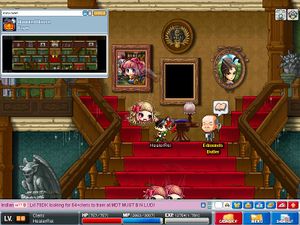 In the Prendergast Mansion

The Prendergast Mansion was once a great center of production for the Prendergast Toy Company, but it fell into ruin after the owner's daughter, Sophilia, died. The grieving father started to go mad, and created hundreds of dolls in her image. Now, it serves as a complex maze that was maintained by Edmund the Butler for the lady Ludmilla. The rooms of the mansion can be approached from any number of directions, and depending on how one enters a room, I.E. through the right side on the floor or on the ceiling, the contents of the room will differ. Many new and unusual monsters, which have evolved from the toys through the dead father's pain, can be found inside the mansion.

After Halloween passed, Sophilia, Edmunds, Jonas, and Ludmilla vanished, their souls put to rest. Old Man Tom and Agent Falcon are still waiting outside of the house, however.

A lot is changed but not much is submited about Haunted House 2 Expansion. It was released GlobalMS in October 22, 2009.

The known new monsters in the Expansion are:

In this patch the following quests have been removed:

In this patch the following NPCs have been removed:

In this patch the following NPCs have been added: