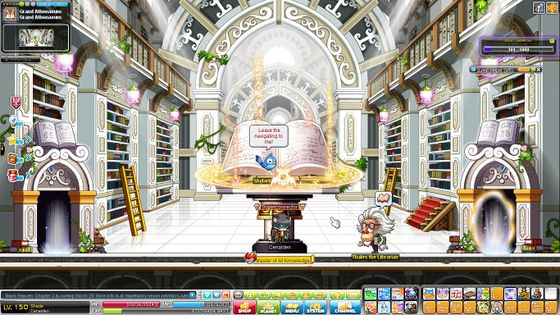 Grand Athenaeum is the place that holds all of Maple World's knowledge and records. This library is more than just dusty old books and tomes. Here you will be able to relive untold stories of key moments in Maple World's history. 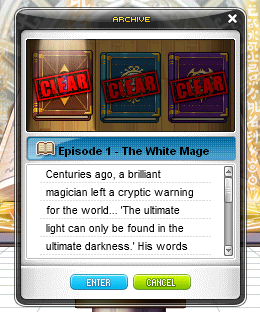 In the Grand Athenaeum, you play through three stories (otherwise known as episodes) that has happened in MapleStory's past.

Episode 1 - The White Mage Centuries ago, a brilliant magician left a cryptic warning for the world… ‘The ultimate light can only be found in the ultimate darkness.’ His words must be heeded if Maple World is to be saved.

Episode 2 - Empress In Training The story of Cygnus before she became Empress.

Episode 3 - The Black Witch Dunamis, the knight responsible for the Empress's safety, has gone missing. Can the Empress be saved? Another knight goes into the den of the Black Wings to find him

Throughout this episode, you act as a mercenary.

In this episode, you act as a wandering warrior.

It is Autumn. Cygnus has fallen sick.

It is winter. Cygnus has recovered.

It is spring after 1 yar has passed. It is Cygnus' promotion to the Empress rank. However, Ereve is under attack.

For this episode, you are taking the role of yourself. To start, talk to Skylark Rita and then select Episode 3.

After completing all 3 episodes, these quests are available. Again, they must be done in sequence. Quest names may be inaccurate due to translation issues.

I will read your books[edit]