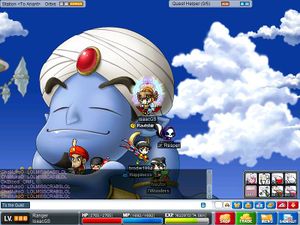 The ride traveling between from Orbis to Ariant. 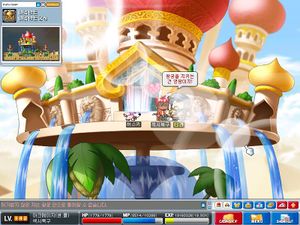 A player in front of Ariant Palace.

Ariant is an Arabic town reached via a flying Genie located in Orbis It has a Free Market Entrance and a World Tour NPC as well. It's a desert themed area with monsters to fit. They range from snakes and sand rabbits to cacti and the sandman. Inside the town is a refining factory for processing Lidium ores located in the sands, as well as a lot of empty houses and some shady characters that look like mercenaries and assassins. Near there is a Palace, only accessible when carrying an entry pass. North of Ariant lies the town of Magatia.

Because of its status as the sole supplier of Lidium, Ariant is supposed to be a prosperous town built around a magic Oasis (as seen outside of the Castle). The town's people, however, do not get to share in the wealth, as the Queen has levied heavy taxes on all trading. The Queen, supposedly a fairy from Orbis, is quite greedy and obsessed with Jewelry, and thus wastes all the tax money on trinkets made of Lidium for herself, leaving the townspeople to starve. This, combined with attacks by a group of thieves called the Red Scorpions, has led to a resistance movement, the Sand Bandits, being formed by citizens of the town. Rumor has it that the Sand Bandits have been searching all of the world for heroes to join their group.

Directly outside of town to the right are swarms of Sand rabbits of both genders. Small Oases are located throughout the area, providing cool spots in the desert. Plenty of rest platforms can be found on every map, where a player can set up their chair and take a break from the heat. Traveling a little further, one stumbles across the Earmuff Frilld, the poorly dressed lizard monsters. NPCs are commonly found out here, many wielding swords. The next monster a player encounters in the desert is the Bellimoa, a relatively large snake that doesn't flinch easily, and attacks by barreling into the victim. The path through the desert loops around to the other side of town, but not before passing through a monster "town" occupied by Catus and Royal Catus. Giant cactus houses can be seen in the background, complete with doors and windows. Finally, Jr. Catus are roaming around the left side entrance of the town of Ariant. Recently, a cactus-type Area Boss, Deu, has been added here, as well as an arena called the "Ariant Coliseum." Details can be found on the Party Quests page.

There are four entrances to the town: two lead to a loop around the town, one leads to Magatia, and one is the Genie ride to and from Ossyria. All exit portals from the town are in the main area (with Cassandra and the Maple Admin), however the Genie can be found in the Ariant Station Platform available from the portal with the lamp sign above it (halfway between the far left edge and Cassandra).

There is another path that contains monsters, accessed from right of the center of town, as opposed to either of the far ends. This path leads to the town of Magatia. The first species encountered is the Meerkats, among the toughest of Ariant's monsters. After traveling in this direction for a few maps, the sun begins to set and the area darkens to match Magatia's theme. Vultures called Kiyo and Sand Dwarves are keeping watch on the desert floor. The ruins of buildings can be seen, sinking into the sand. In the final maps of Ariant, huge sand monsters with trees emerging from their heads walk, ready to defeat any traveler attempting to reach Magatia. With the addition of the Camel Taxi however, most players can easily skip over this region, if they wish.