Thailand, like the other Original Areas, is made up of several towns. The Floating Market is based off of the real floating market in Thailand's cities. The Golden Temple, the second town, is a Buddhist temple located deep in the jungle. The origin of this world tour place, ThailandMS which has been closed down in June 29, 2012, used to name it is Siam.

In town, NPCs float on boats and some stand ashore selling items. There are some symbols of modern life, such as street signs and stacks of tires, but it is mostly traditional in appearance. Outside of the Floating Market's town area on both sides are swampy monster fields. The Floating Market has access to the Free Market. 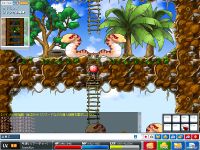 The Python stalk the ends of Thailand.

Poisonous-looking frogs and toads hop in puddles of water. Ligator and Croco march around on platforms and underwater in abundance. Black and white chickens resembling those found in Shanghai wander back and forth. Salamanders walk around, and the red ones fire magical tongue attacks. At the end of the swampy area, ladders lead to a number of the strongest monster, Python. It has a magic attack that can be dangerous. Unlike all other World Tour Areas, Thailand's Floating Market does not feature a boss. Floating Market is also unique in that it's one of the only areas outside Aqua Road where you can go underwater. In the water, some fish that can't be attacked are seen swimming, chomping their jaws menacingly. 10 damage is taken for every few seconds of time spent standing underwater. Similar to some Jump quests, there are platforms that are used for transportation. Some of these appear to be solid, although those with a flower growing on top are not, and cannot be stood on. It can be quite tricky to the casual visitor.

To reach this area

Thailand is part of the World Tour, and can be reached through Spinel in all available versions.