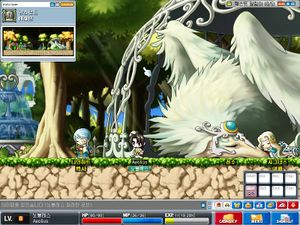 Neinheart the Tactician, Shinsoo the Holy Beast, and Empress Cygnus.

Ereve is the home of the Empress of the Maple World, Cygnus, along with her advisors, the Cygnus Knights and the divine beast Shinsoo. The Cygnus Knights work actively to stop the forces of the Black Magician, the recurring villain who is referenced in Magatia, Ellin Forest, and Nautilus Harbor.

With the Black Magician's sudden increase in power, the number of existing Knights is no longer a sufficient defense. Thus, Cygnus has opened up the land of Ereve to visitors who wish to join their ranks. 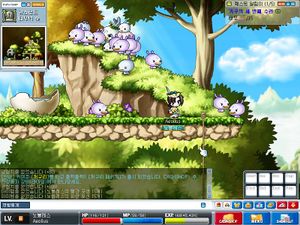 Many monsters crowd a platform in the low leveled hunting area.

Ereve has a number of unique features. Many of the quests are exclusive to Cygnus characters. The hunting grounds(Lotus Forest) cannot be entered by any non-Cygnus characters; this is mostly to prevent higher level characters from interfering since Noblesse level up to level 10 here, instead of Maple Island. On the far side of the forest, there is a special training area. This is used to get new apprentice Knights (in their training) started, and also where the later important tests seem to be held.

The creatures of Erev seem to be light and birdlike. Because the creatures can't be reached by all players, they do not drop cards for the Monster Book. The area itself also possesses these Avian qualities, as does the legendary Holy Beast, Shinsoo, which is also found here. Shinsoo seems to be a wise creature, and not a monster. By talking to Shinsoo, a player can gain a special blessing, up to level 20, which increases the player stats for one hour, making it very useful to beginning Noblesse. The island levitates high in the sky using the power of the Sprites. The island is able to travel about the world, however, it is now stationed close to Maple island and ellinia.

Upon reaching level 10, and obtaining prior approval from Nineheart, the Noblesse can then speak to Mihile to become a Soul Warrior, Oz to become a Flame Magician, Irena to become a Wind Breaker (Archer), Eckhart to become a Night Walker (Thief), or Hawkeye to become a Striker (Pirate). The main difference between a Cygnus character and their ordinary counterparts is that Cygnus characters are bonded to a unique summon "sprite" from their first job onward. This sprite imbues the Cygnus character with the bonuses of its elemental affinity, granting the Knight new skills and greater powers.

Spoiler
Ereve is the island from where Cygnus (Greek for "swan"), the Empress, watches over Maple World. To serve this purpose, Ereve is designed to be a Levitated island which can drift to various regions. However, due to the setting up of the Cygnus Knights, the island has to be stationed such that knights can return to the island with ease. The resident creatures on the island were created by shinsoo to facilitate the training of new knights, as the island is devoid of monsters.

When the Knights of Cygnus becomes an official class, Ereve would have a new initial tutorial quest chain similar to Mushroom Town Training Camp. The quests feature a small bird NPC that guides and follows new players around. The quests are madatory to be promoted to a knight-in-training.